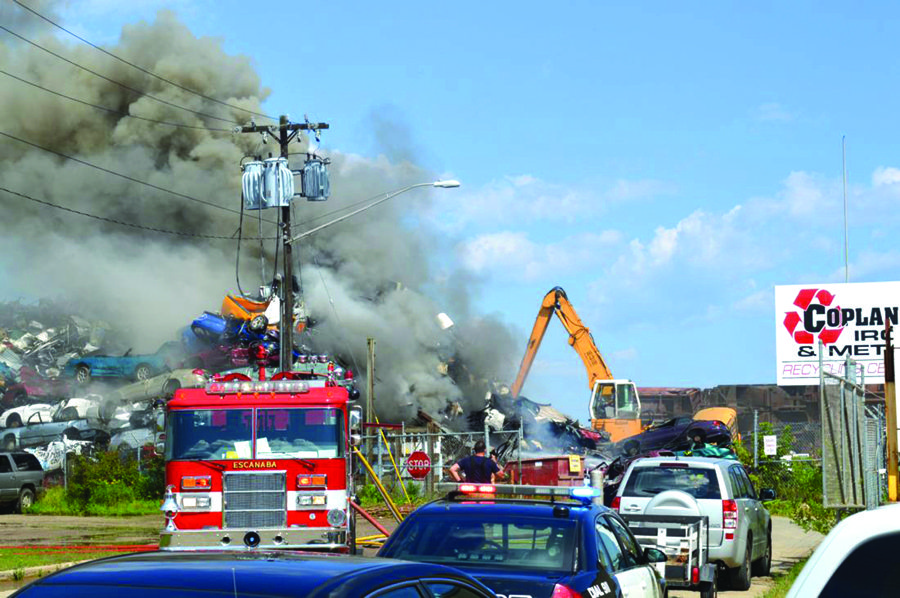 ESCANABA — Another local salvage yard was impacted by fire Monday as Escanaba Public Safety officers were dispatched to Coplan Iron & Metal Co. after an explosion and multi-vehicle fire.

The blaze broke out at the salvage yard, located at 1610 7th Ave. N. in Escanaba, around 3:34 p.m. Monday, according to police. The area was covered under a huge plume of black smoke as fire engulfed a pile of stacked cars in the salvage yard. Early reports indicated multiple vehicles on fire and concerns about propane tanks nearby.

During the blaze, Coplan staff used heavy machinery to move piles of scrap to assist in extinguishing the fire, said Escanaba Public Safety Director Rob LaMarche. The Delta County Sheriff’s Office blocked off the road by Coplan’s and directed traffic around the scene during the fire.

This morning, staff at Coplan Iron & Metal Co. were removing some of the burnt vehicles.

LaMarche said firefighters battled the fire for about three hours Monday, with around 30 responders at the scene.

According to LaMarche, the fire was caused by a vehicle that still had gas in its tank, which hasd been brought into the scrap yard. While moving the car to the scrap pile, the tank was punctured, causing an explosion.

LaMarche explained that fighting a blaze in a salvage yard can be dangerous because of all of the sharp metal and possible explosions from the vehicles that are set ablaze. In addition, locating exactly what is on fire can be difficult as the piles of salvage can be quite large, said LaMarche.

LaMarche said there were no injuries as a result of the fire.

This fire comes less than a week after a blaze destroyed Pete’s Auto Wrecking, located just west of Escanaba in Wells Township.

According to police reports, Escanaba Public Safety was dispatched to the structure fire at Pete’s Auto Wrecking at 4113 U.S. 2 and 41, around 11:45 a.m. last Tuesday, after a fork lift operator had struck an incoming power line that was arching on the roof of a metal pole building. When firefighters arrived on the scene, the building was on fire and it quickly spread to other structures nearby. The business was destroyed and firefighters were at the scene into the evening.