From the top down 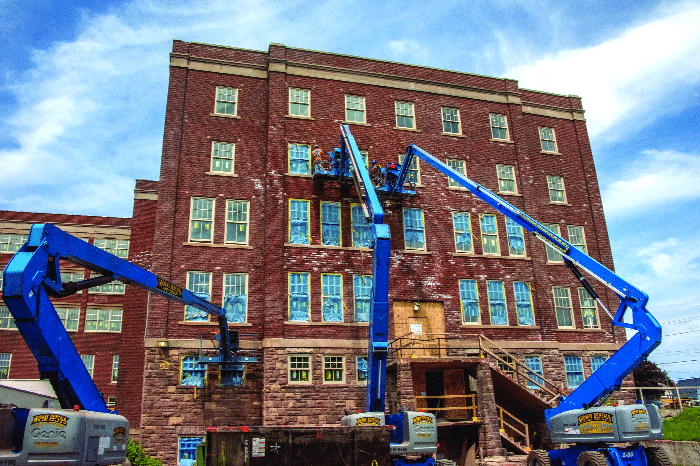 The former Holy Family Orphanage undergoes a facelift as construction crews on boom trucks restore the exterior masonry of the historic building, which will open as Grandview Marquette later this fall. Recent rainstorms have delayed the restoration work. (Photo courtesy of Charles LaBelle)

MARQUETTE — Grandview Marquette, an affordable housing project at the renovated Holy Family Orphanage, is taking rental applications and is expected to be open by the end of October, after rainstorms have led to some construction delays.

The historic orphanage on Fisher Street was built in 1915 and had been vacant since 1981.

Community Action Alger Marquette Executive Director Amy Lerlie said heavy rain has made restoration of the exterior masonry a challenge, and the hazard of lightning has posed delays since the work is done with boom trucks. But, she added, local contractors and subcontractors are doing an amazing job.

“And by no fault of their own, we had hoped to be open by the end of September. Now it’s looking like later October,” Lerlie said. “Part of that is weather delays and other things, but also just the complexity of what’s going on in there right now.”

Construction is being completed from the top down.

Drywall and painting is done on the third and fourth floors, with cabinets and kitchens being installed in the next few weeks, Lerlie said.

Once finished, the 90,000-square-foot apartment complex will serve low- to moderate-income individuals and families with 56 income-adjusted rental units.

The renovation, begun in August 2016, consists of environmental abatement, a complete rebuild of the interior and exterior, and preservation and recreation of much of the historic architectural design, including the original chapel inside, which will be used as a public space, according to developers.

Farmington Hills-based developer Home Renewal Systems purchased the orphanage in June 2016, after the property was foreclosed on in 2011.

The project is a partnership between HRS, CAAM, and investors Old National Bank of Indianapolis and InSite Capitol. Low-income housing tax credits and historic rehabilitation tax credits are also financing a portion of the $16 million project.

CAAM has started processing applications, which are available on the website, www.communityactionAM.org, under “Housing Services,” or can be picked up at its office at 1125 Commerce Drive, in Marquette Township.

Rental rates are striated based on an applicant’s income as a percentage of area median income. CAAM will also accept project-based vouchers and subsidies.

“The units are set at a variety of rental rates and income levels, and it’s a bit like putting a puzzle together,” Lerlie said. “We have to find the family that will fit that economic profile for that particular unit for that number of bedrooms, … so we might process 200 people to find those very specific 56.”

Fourteen units are reserved as permanent supportive housing for households that are formerly homeless, disabled or those with special needs, who will pay 30 percent of their income in rent. Vouchers through the U.S. Department of Housing and Urban Development will be awarded to qualifying individuals on the condition they are linked with supportive services, to be coordinated by CAAM.

Those not accepted will be put on a waiting list, and there is no obligation or fee if an applicant finds other accommodations, Lerlie said.

Tours of the facility are only being offered on a limited basis, mostly to essential personnel, due to safety hazards, Lerlie said.

Photographer Charles LaBelle had completed a photographic essay of the old orphanage before the renovations began, and has been documenting the construction as it’s progressed. Another book will be released showing the transformation, with half the proceeds benefitting CAAM. To purchase the book or for more information, visit labellephotos.com.

Lerlie said she was humbled and appreciative when Michigan Department of Health and Human Services Director Nick Lyon praised the project at a conference she attended downstate recently.

According to a copy of his comments provided by Lerlie, Lyon said the project is innovative on several fronts, including its financing, which “is an important example of responsible use of public dollars that will save taxpayers millions of dollars over the course of the life of the housing site.”

Lerlie said CAAM became involved in the project because HRS wanted to partner with the local nonprofit.

“We’re just so fortunate,” Lerlie said. “We would not be involved in this project if it weren’t for them. … Locally, we have such ownership in the process and the product and the outcome, and that’s (HRS’s) business model, which I think is amazing.”

CAAM will be responsible for ensuring tenant compliance, and a management partner, KMG Prestige Inc. will manage the property, developers have said.

“So if you’re (going to) partner with a nonprofit locally who knows something about the affordable housing industry, that would be us,” Lerlie said.