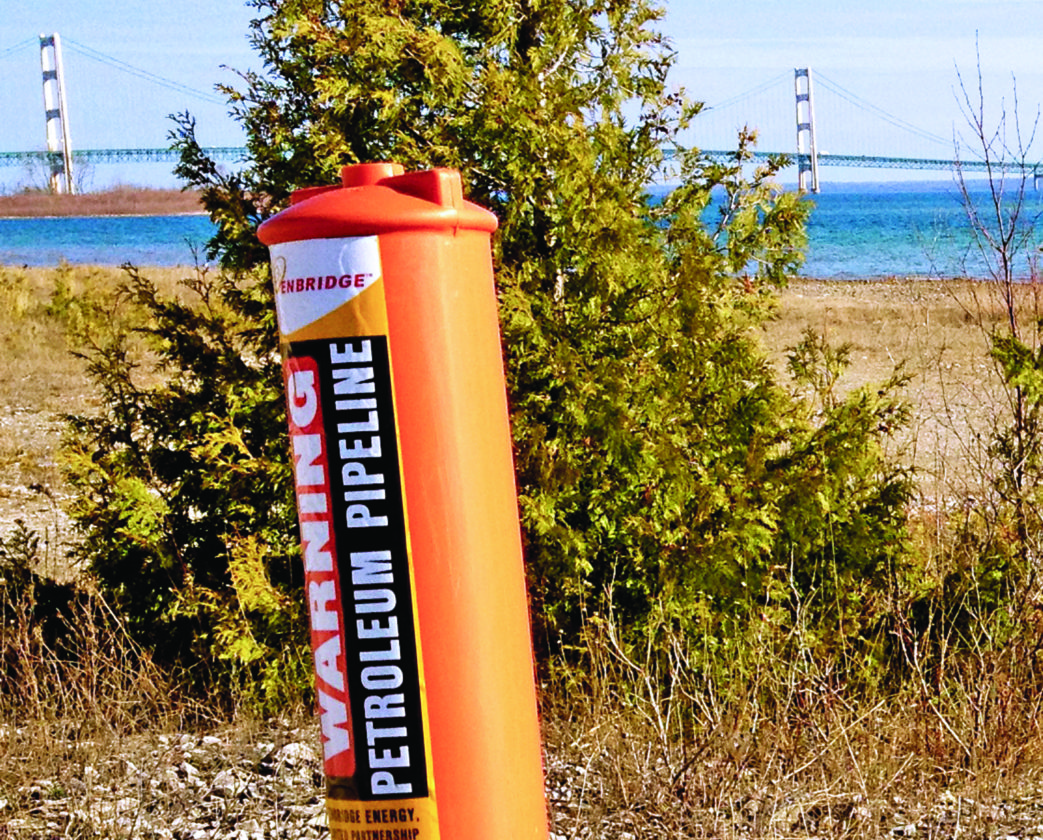 The controversial Enbridge Line 5 pipeline is seen with the Mackinac Bridge in the background. A group of principally Michigan retailers have joined forces with others calling for the decommissioning of the line, which runs along the lake bottom beneath the Straits of Mackinac. (Journal file photo)

LANSING — The chorus of voices calling for the decommissioning of a twin oil pipeline running across the bottom of the Straits of Mackinac has become more diversified.

A network of 18 businesses, all but one based in Michigan, recently announced support for halting use of the controversial pipeline.

The Great Lakes Business Network, formed in December, is supported by the National Wildlife Federation and the Groundwork Center for Resilient Communities in Traverse City. It’s also collaborating with the Michigan League of Conservation Voters.

Line 5 is a pipeline operated by Enbridge Inc. that runs 645 miles from Wisconsin to Ontario and carries 540,000 barrels of oil per day. The 4.5-mile section that crosses under the Straits spanning the Upper and Lower peninsulas is controversial.

Built in 1953, the pipeline was designed to last 50 years. Critics say that a spill in the Straits would have catastrophic consequences for Great Lakes ecosystems and the businesses that rely on them.

They pose a particular challenge for oil cleanup due to strong currents that sweep through them and reverse frequently, critics say.

Meanwhile, Enbridge cites the importance of Line 5 in supplying propane to the U.P. It supplies 65 percent of propane used in the U.P. and 55 percent statewide, according to the company.

“It’s important to keep in mind, especially at this time of year, especially in Michigan, there are a lot of people that rely on what Line 5 supplies,” said Enbridge regional communications supervisor Ryan Duffy.

The Groundwork Center has been fighting Line 5 since 2013, said Jim Lively, the group’s program director. In a controversy that’s been pressed mainly by nonprofit organizations, the new business partnership adds another dimension of pressure on state officials, he said.

Nonprofit groups pressured the state into creating a petroleum pipeline task force, which released a report in July 2015. That report prompted Gov. Rick Snyder to create a Pipeline Safety Advisory Board to implement the task force’s recommendations.

The board oversees two studies funded by Enbridge — one assesses risks posed by the pipeline, the other explores alternatives. Those studies are expected to be released this summer.

Duffy said the company is glad the state is conducting the studies and looks forward to the results. Enbridge regularly tests the pipes. It also provides information about Line 5, inspections and monitoring systems on its website.

The company is not assessing alternatives, Duffy said.

And neither is the new Great Lakes Business Network. It calls for Line 5 to be shut down strategically to limit economic disruption, with the process to begin as soon as possible.

Member businesses have varying opinions regarding alternatives, and the network as a whole has no official stance, Lively said.

The focus is on the immediate risk to the Great Lakes, said Dan Sloboda, an environmental coordinator for Patagonia, an outdoor clothing retailer based in Chicago.

Many member businesses have called for a shutdown for some time, including Cherry Republic, a gourmet food store based in Glen Arbor.

The company is among those that supported the production of “Great Lakes, Bad Lines,” a short documentary released last August that advocates for decommissioning. The film was produced in partnership with FLOW, a nonprofit law and policy center in Traverse City that advocates for the Great Lakes.

Cherry Republic owner Bob Sutherland has been donating to nonprofit groups like FLOW for years. He’s a former member of the Groundwork Center and a current member of the League of Conservation Voters.

FLOW alleges deceit and number-fudging by Enbridge and claims that the company has exaggerated the importance of Line 5’s supply of propane to the U.P. According to a study by the organization, Line 5 supplies only 35 to 50 percent of the U.P.’s propane.

That demand could be met each day with five tanker trucks or two rail cars, according to FLOW’s analysis. Such transport is usually considered more dangerous than pipelines, but the location of Line 5 justifies an exception, said FLOW executive director Liz Kirkwood.

The organization claims that 90 percent of the oil running through the Straits ends up in Canada and that Line 5 is an unnecessary shortcut.

But Enbridge disagrees. Thirty percent of the oil from the line goes to a Michigan refinery, Duffy said, and outside organizations don’t have access to company data on oil delivery.

Sutherland, Kirkwood and Lively each cited Enbridge’s track record as a motivator for their opposition. In 2010, Enbridge’s Line 6B ruptured, spilling heavy tar sands oil and polluting nearly 40 miles of the Kalamazoo River. Enbridge has put the cost of the resulting cleanup at more than $1 billion.