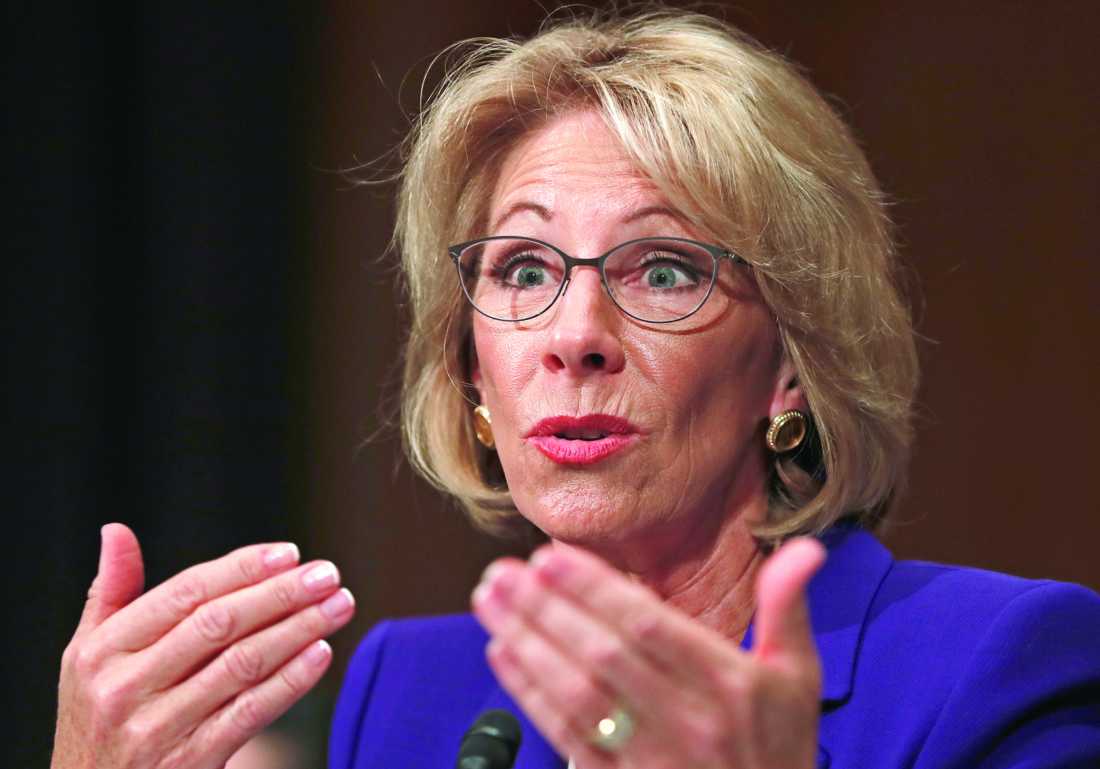 LANSING — The nomination of Michigan’s Betsy DeVos to be U.S. secretary of education has focused new attention on equity issues in public schools.

One of the many jobs schools have is to ensure gender equity through a federal law called Title IX. But Michigan schools’ understanding of their responsibilities under the law varies, and some activists worry that it will get even less attention if DeVos is confirmed.

Title IX prohibits gender discrimination in schools at both the state and federal level, according to the Michigan Department of Education. Schools are obligated to protect not only students, but teachers and staff, as well as ensure their programs and curriculum are free of gender bias.

“I can’t see her standing up for Title IX,” Steve Cook, president of the Michigan Education Association, said of DeVos. “It’s just not anything I’ve ever seen (in her record) here in Michigan for over 20 years.”

The MEA is one of the state’s major unions for teachers and other school staff.

In DeVos’ Senate confirmation hearing Jan. 17, she said it was “premature” to determine whether she would uphold the Obama administration’s Title IX guidelines covering sexual assault on college campuses. The future for Title IX compliance in K-12 education also remains unclear.

Already, there appears to be confusion in many Michigan school districts about their responsibilities under Title IX. Each district is required to have a Title IX coordinator to prevent and monitor cases of sex discrimination, but several districts contacted could not identify their designated coordinators.

The American Association for University Women has compiled an interactive map of K-12 district Title IX coordinators, but many of those listed said they don’t hold that position.

“I don’t know that we have a distinct person for Title IX,” said Tonya Brundige, district data specialist for Three Rivers Community Schools, who is listed on the AAUW’s map as a Title IX coordinator.

Similarly, Scott Roper, assistant superintendent of the Holly Area School District, is also listed as the district’s Title IX coordinator, but said he doesn’t have that responsibility.

“We are so small, sometimes it’s hard to know who wears all of the hats,” said Barbara Fisher of Mackinac Island Public Schools. Fisher said she thinks the district’s superintendent, Timothy Hall, handles Title IX.

Elizabeth Collins, the Michigan Department of Education Title IX coordinator, could not be reached for comment.

While Cook said he foresees the Trump administration scaling back on Title IX regulations overall, he doesn’t expect DeVos to have much individual influence if she is confirmed for the job.

But Anna Voremberg, managing director of End Rape on Campus, stresses DeVos’ ability to individually alter the enforcement of Title IX policies. The sexual assault survivor advocacy organization based in North Carolina is lobbying for a commitment from DeVos to support Title IX protections.

If protections are scaled back, Voremberg said she expects to see an increase in bullying and sexual harassment concerns going unreported, specifically at the high school level. Rights of lesbian, gay, bisexual and transgender students are of particular concern for Voremberg and End Rape on Campus.

To push DeVos to address Title IX concerns, End Rape on Campus has collaborated with another advocacy organization, Know Your IX. The organizations are asking students to share a statement or video of themselves on social media with the hashtag #DearBetsy.

“We thought it would be pretty powerful to share amplified stories and give students a platform to share how Title IX is important to them,” Voremberg said.

Several officials have challenged criticisms that DeVos will not pursue students’ best interest. Gov. Rick Snyder, in a Detroit News op-ed article, wrote that DeVos “has a big heart” and “cares deeply about the well-being of children.”

U.S. Sen. Debbie Stabenow, a Democrat, has issued a statement rejecting DeVos’ nomination due to policies that Stabenow said have seriously undermined public education in Michigan. Democratic U.S. Sen. Gary Peters has yet to make a formal statement.