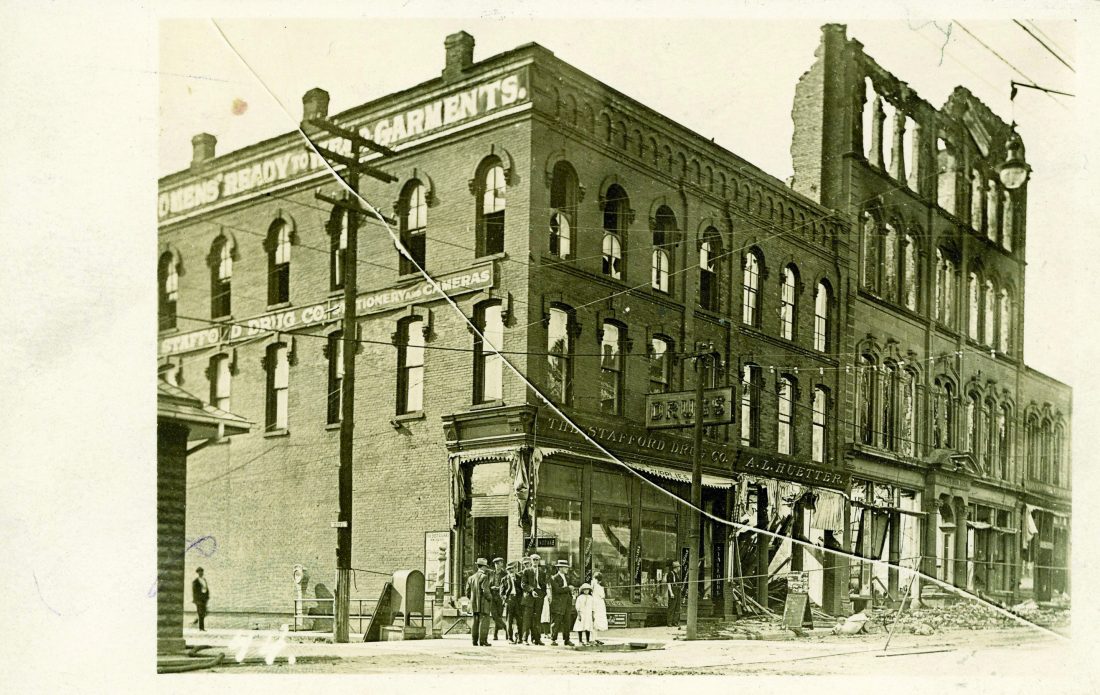 Damage to the Bacon Block in the city of Marquette from a 1912 fire is apparent. (Photo courtesy of the Marquette Regional History Center)

MARQUETTE — Just before 7 on the evening of July 5, 1912, a fire was reported in the Grabower dry goods store on the west side of Front Street between Washington and Main streets (the block currently occupied by Flagstar Bank).

The ensuing conflagration was reported as “the most spectacular that has ever occurred here, barring the total destruction of the city some decades ago (in 1868).”

At the time, the Marquette Fire Department was primarily a volunteer organization. Although the men were paid for each fire they responded to, they did not have any formal training. When they arrived, they found the entire rear of the Grabower store completely engulfed in flames from the basement to the second story.

The firefighter’s initial efforts were relatively ineffective and by 8 the fire had spread to the Bacon Block, a four-story building to the south. It was occupied by the Westlake and Murray stores plus a bowling alley. It was at that point that the decision was made to request help from the Negaunee and Ishpeming Fire Departments.

Around 10, just as the additional help from Negaunee and Ishpeming arrived, the south wall of the Bacon Block collapsed onto the Vierling Block next door, collapsing that building’s second floor and spreading the fire to that building as well. [This was a building owned by Martin Vierling, not the building currently known as the Vierling.]

This third building was occupied by the Stafford Drug Store and A.L. Hutter’s, a women’s furnishings store. Luckily the two firefighters who had been on the roof of the Vierling building saw the collapse coming and were able to escape the falling debris.

Unfortunately, some of the equipment brought from Negaunee wasn’t working but the fire fighters were able to take over and give the Marquette men a break.

It was reported that at least 24 men fighting the fire were overcome by the smoke, including some who kept going back to fight the fire and had to be revived three or four times.

Thousands of people came to watch the fire, crowding the streets and the roofs of the surrounding buildings. Spectators even drove in from Negaunee and Ishpeming to watch the fire, with the Mining Journal reporting that “comparatively few automobiles were left in either city after the seriousness of the situation here was learned.”

By midnight, the fire was mostly under control, although they continued to spray the buildings with water through the following morning to prevent flareups.

Of the four buildings on the block, only the Frei Building, directly on the corner of Front and Washington streets was spared. Losses from the fire were estimated at nearly $150,000, with about half of the losses covered by insurance.

The origin of the fire was never discovered.