In 1765, Patrick Henry denounced the Stamp Act before Virginia’s House of Burgesses.

In 1914, the Canadian ocean liner RMS Empress of Ireland sank in the St. Lawrence River in eastern Quebec after colliding with the Norwegian cargo ship SS Storstad; of the 1,477 people on board the Empress of Ireland, 1,012 died.

In 1917, the 35th president of the United States, John Fitzgerald Kennedy, was born in Brookline, Massachusetts.

In 1943, Norman Rockwell’s portrait of “Rosie the Riveter” appeared on the cover of The Saturday Evening Post.

In 1953, Mount Everest was conquered as Edmund Hillary of New Zealand and Tensing Norgay of Nepal became the first climbers to reach the summit.

In 1954, English runner Diane Leather became the first woman to run a sub-five-minute mile, finishing in 4:59.6 during the Midland Championships in Birmingham.

In 1985, 39 people were killed at the European Cup Final in Brussels, Belgium, when rioting broke out and a wall separating British and Italian soccer fans collapsed.

In 1995, Margaret Chase Smith, the first woman to serve in both the House and the Senate, died in Skowhegan, Maine, at age 97.

In 2008, the Vatican issued a decree stating that anyone trying to ordain a woman as a priest and any woman who attempted to receive the ordination would incur automatic excommunication. Actor-comedian Harvey Korman, Emmy winner for “The Carol Burnett Show,” died in Los Angeles at age 81.

In 2009, a judge in Los Angeles sentenced music producer Phil Spector to 19 years to life in prison for the murder of actress Lana Clarkson. Jay Leno hosted “The Tonight Show” on NBC supposedly for the final time, giving up his desk to Conan O’Brien. Leno returned.

Ten years ago: Dennis Hopper, the high-flying Hollywood wildman whose memorable career included an early turn in “Rebel Without A Cause” and an improbable smash hit with “Easy Rider,” died in Los Angeles at age 74.

MARQUETTE — The Kaye E. Barker is expected at 4 p.m. Friday at the Lake Superior & Ishpeming ore dock in ...

Marquette and vicinity: Tonight, a 30 percent chance of showers and thunderstorms. Mostly cloudy, with a low around ... 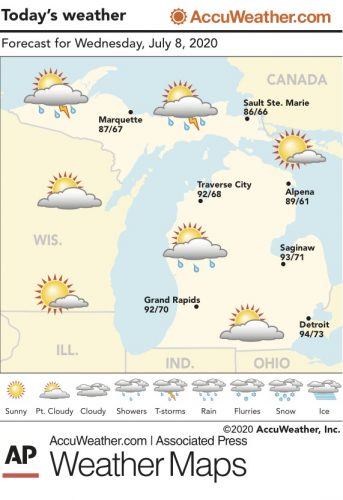