Marquette’s ‘Line in the Sand’ 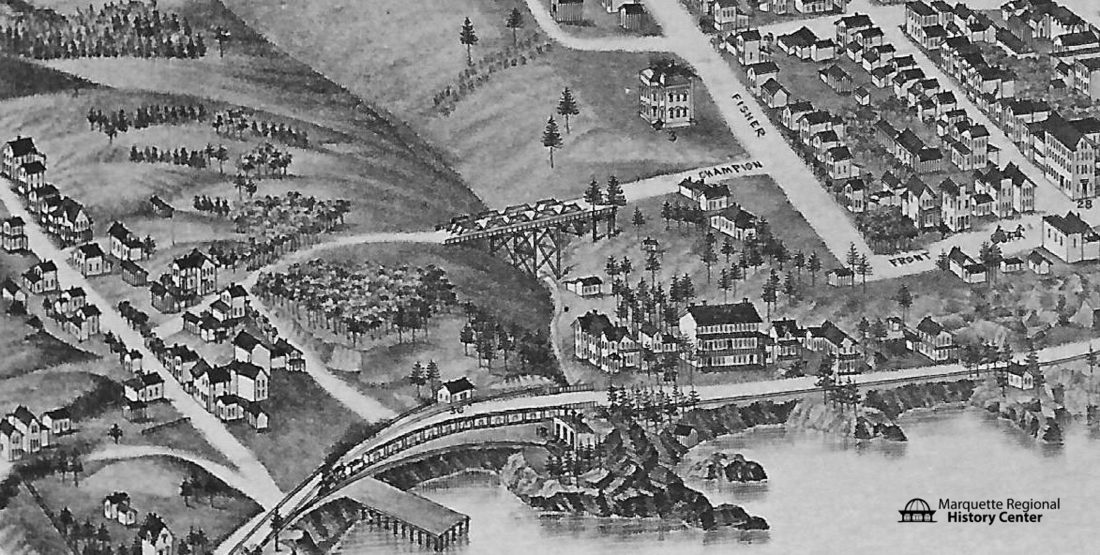 Above, an 1881 lithograph map of Marquette, cropped to show the Champion Street Bridge, is pictured. (Photo courtesy of the Marquette Regional History Center)

MARQUETTE — The Berlin Wall, the DMZ between the two Koreas, and other no-man’s-lands may stand out in world history, but it’s possible they could pale in comparison to another that tore a city apart, Marquette’s Champion Street Bridge.

The bridge, the first in the city to span the Whetstone Creek, acted as a dividing line between what we now call South Marquette and the rest of the growing city. South Marquette, actually the city’s first residential area, was inhabited primarily by working class immigrants from Ireland, Sweden, and Canada.

These individuals worked on the railroads and in the quarries, and took pride in the differences between their lifestyle and those of the “rich folk” that lived “downtown” as they referred to the area inhabited by the city leaders and their businesses on the other side of the creek.

For the first 25 years of the city’s existence the only way to get into downtown Marquette was along Lake Street through what we now call Founder’s Landing. However, in 1874 the first bridge was built over the Whetstone, which made Champion Street a corridor to connect South Marquette to the northern parts of the city.

The bridge, 222 feet long, consisted of six trusses made of iron and wood sitting 40 feet over the stream bed. It had two sets of wagon tracks and two pedestrian walks contained within it.

In the early part of the 20th century, as the railroads took over the area around Lake Street and Front Street had yet to be expanded into south Marquette, the bridge was for several decades one of the only ways to get from one part of the city to the other, serving as both a gateway and a barrier between south Marquette and the rest of the city.

For residents of certain parts of Marquette, it truly was a no-man’s-land.

Teenage boys in particular took offense when an interloper, often another teenager from North Marquette, would attempt to cross the bridge into the south section of the city. Violence could actually occur if it was discovered that visitor had come to South Marquette to visit a member of the opposite sex.

In fact, newspaper stories and police records from the era talk about the many fights that occurred both on the bridge and on the grounds of the nearby Fisher School. Many of the battles between “The Swamp Rats” and “The Dump Rats” involved fists, but others had everything from pea shooters to jack knives used as weapons.

As the city grew, other streets allowed access to the northern parts of town, and soon the Champion Street bridge became just one of many entrances into downtown.

The old rivalries between south Marquette and other neighborhoods fell by the wayside (except, as legend goes, during after-school fights behind the Graveraet and Howard schools), and by the middle part of the 20th century the Champion Street bridge became just another way to get to and from work or school.

The current version of the bridge was built in 1963, part of the construction of the U.S. 41 bypass that took over the valley carved by the Whetstone Creek. Now, it sits overlooking a roundabout, passed under by tens of thousands of cars a day, the drivers of which probably having no idea that it was at one time Marquette’s most infamous piece of no-man’s-land.

If you would like to learn more about South Marquette, a walking tour is being presented by the Marquette Regional History Center, led by historical storyteller Jim Koski. The tour will tell stories of the people and businesses that made South Marquette such a unique place. It begins Wednesday, Aug. 21 at 6:30 p.m. at the Mare-Z-Doats parking lot on south Division Street.

There’s a suggested $5 donation. For more information call the History Center at 226-3571, or visit its website at www.marquettehistory.org.