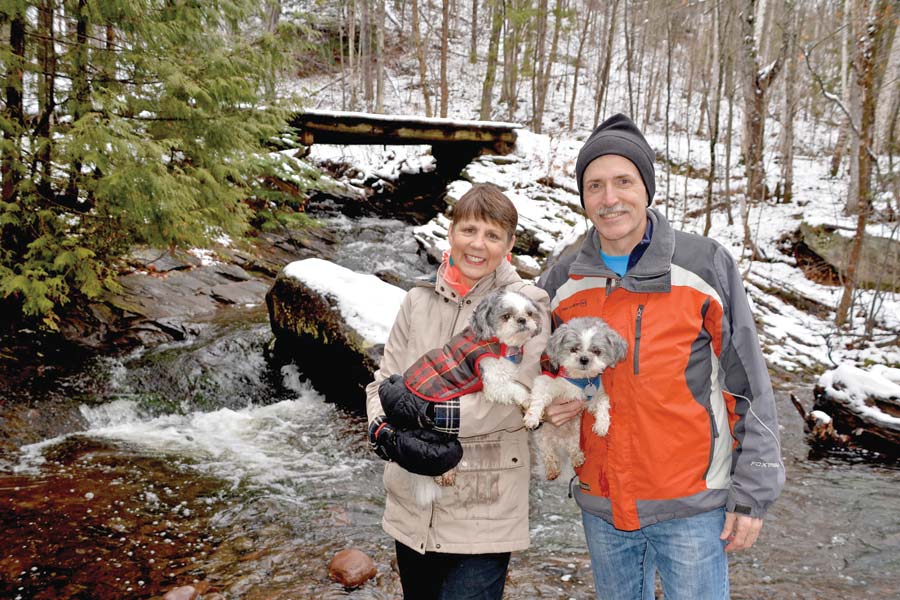 Keith and Julie Meyers stand with their dogs in front of the old Sisu Bridge in the Swedetown Creek Gorge. (Photo courtesy of the Keweenaw Nordic Ski Club)

HOUGHTON — The Keweenaw Nordic Ski Club has kicked off its capital campaign with a local family’s significant donation toward the cost of replacing the Sisu Bridge in the Swedetown Creek Gorge.

David Meyers, a 1944 graduate of Chassell High School and now a resident of Port Richey, Florida, along with his son and daughter-in-law, Keith and Julie Meyers of Chassell have gifted a total of $10,000 toward the bridge’s reconstruction cost which is estimated at $20,000.

This large donation secured the naming rights for the bridge. KNSC plans to construct the new bridge this summer in partnership with the city of Hancock.

David’s and his late wife Beatrice Nurmi Meyers’ strong ties to Hancock were a big motivation for the donation.

Beatrice was a 1947 graduate of Hancock High School and her father Charles Nurmi was the General Manager of Northland Co-op in Hancock.

Beatrice went on to have a long career as a public school teacher. She taught in the Michigan communities of Ferndale, Tapiola, and Holt; she also worked in Indianapolis, Indiana; Billings, Montana; and Woodridge, Illinois.

After serving in the U.S. Navy in the Pacific during World War II and in China during its civil war, David started the pathway to his professional career as a truck driver for John F. Ivory of Detroit.

He went on to attend Suomi College before receiving his Bachelor’s degree in Transportation from Michigan State University. David spent his professional career with Consolidated Freightways and Vulcan Materials.

Beatrice and her mother Elizabeth were both members of the Finnish Council at Finlandia University where Keith has continued that tradition.

Keith and Julie moved back to Chassell in 2015. Prior to that, Keith spent half of a 30 year career in appointive positions with the State of Kansas; Julie worked as a beautician and owned a house painting business.

In addition to the tremendous enjoyment they get from cross country skiing with their dogs at Maasto-Hiihto and Churning Rapids, Keith and Julie have been involved with KNSC where Keith serves on the Board of Directors. Keith and Julie see community fitness supported by organizations like KNSC as significant to community health.

The Western U.P. Health Needs Assessment demonstrates a significant need for increasing physical activity to improve the area’s physical and mental health outcomes, according to Keith.

“Investing in the bridge and equipment needs for Maasto-Hiihto and Churning Rapids will assure area residents a quality experience in this incredibly beautiful place to meet their winter physical fitness needs,” he adds.