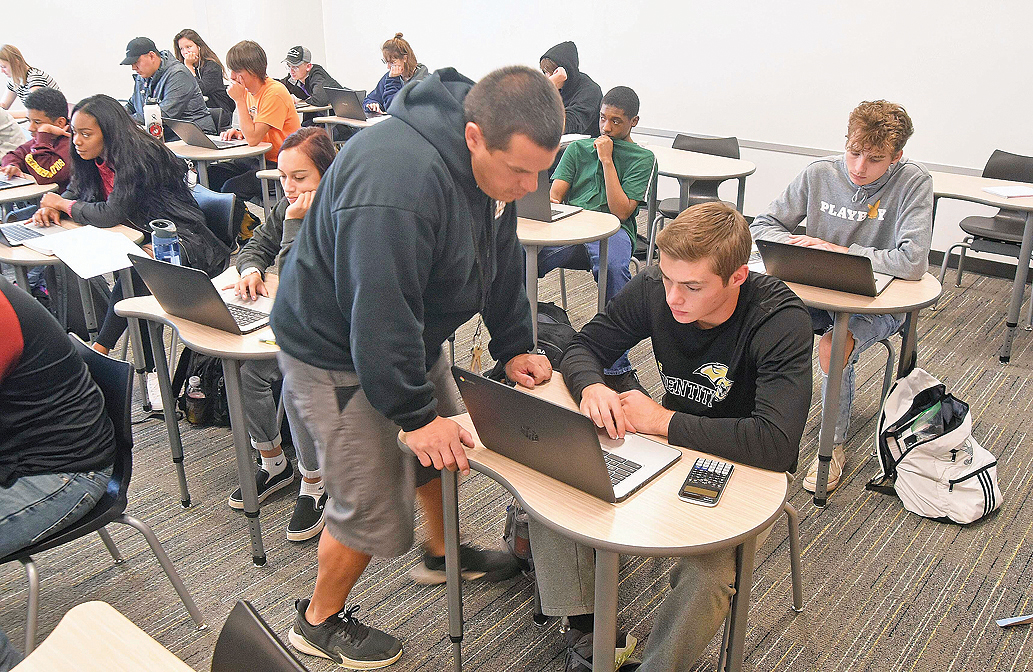 By BILAL SULEIMAN The Bismarck Tribune

BISMARCK, N.D. — It’s a Wednesday afternoon in the B-wing at Bismarck’s Legacy High School, and the 17- and 18-year-old seniors are learning about car loans.

“The difference in buying a $40,000 vehicle on a 4-year and an 84-month (7-year) loan is about three to four thousand dollars in interest,” Steve Shultz said. “And what happens with it? By the time you pay that vehicle off in seven years, it’s depreciated a lot.”

Co-teacher Matt Thornton then begins to explain vehicle leases to the teens sitting in rows before him.

“What a lease is, first of all — type on your master doc — ‘You can only lease a new vehicle.’ You can’t lease on a used car,” Thornton said.

The seniors begin clacking away on their school-issued Dell HP Chromebooks, updating their Google documents to reflect this new tidbit of knowledge.

It’s high school economics with a dose of reality, all part of an idea hatched a few years ago by Thornton and Schultz, who were wondering if they could help kids avoid the financial pitfalls they made as young adults, The Bismarck Tribune reported.

Schultz, who holds a master’s degree in math from Minot State, said the premise of the class is based on mathematical mistakes many people make in their 20s, such as buying a new car off the lot –a cardinal sin in the class.

That example hits home for Thornton, an economics teacher, who bought a new Impala Super Sport right out of college. “Stupid,” he said.

Financially, the best car plan for a young adult is to buy a reliable used vehicle, then drive it until the wheels fall off, they said.

Economics is a mandatory half-credit class for all seniors in North Dakota, but at Legacy, once a week students focus on planning their financial future.

Senior student Cruz Weltz normally breezes though his classes, but he said the personal finance class forces him to study and challenge himself, which he likes.

“It’s really helpful. It opened my eyes up to what I’m going to have to deal with,” Weltz said.

At the beginning of each semester, students make a plan for lives after high school, from which college they want to attend to which car they want to drive. Then, they use the average yearly income of the career they’ve chosen to determine their monthly income, which determines if their path is financially feasible.

“It’s actually putting these numbers to the test and seeing what the totals are and finding out, ‘Can I actually afford this path?'” Thornton said. “It’s all about what kind of lifestyle can you afford with the job you’ve chosen.”

Students try to personalize their plans for their own real life. Students who have already been accepted to college and received scholarships factor those numbers into their plans.

Many students are heartbroken when they realize their dream of attending an expensive college may leave them with a lifetime of debt.

“We call it ‘Tearsday,'” Thornton said.

For example, “We tell them 10% of your monthly income can be dedicated toward college loans,” Thornton said. “We had a girl one semester come back and it was like 49%. And I’m like, I’m not your parent, I’m not telling you what you can or can’t do. I’m just saying those numbers are crazy.”

By the end of the semester, students are more financially literate and prepared than many adults twice their age.

Thornton said it was bizarre at first to hear kids discussing mature topics like insurance and retirement plans among themselves.

“We’re used to it now, but when adults come in and kids are like ‘I just don’t know if I like this 401(k) over this Roth IRA’ — we’re having these discussions, and it’s like, ‘I didn’t have that thought until I was 27 years old,'” Thornton said.

So far this semester, they’ve covered things including college tuition and home ownership versus renting. Yet to come are retirement, insurance and other costs like cellphones.

They encourage kids to save their master document, which they compile all semester, to use after they graduate high school. They were surprised by how many kids came back to visit and said it was really useful to them.

Legacy offers business classes that focus on areas like balancing a checkbook, and there is a standalone personal finance class many students take before senior year. Thornton and Schultz work to complement those classes.

“It’s like a nice teamwork effort,” Thornton said. “And some of this stuff is just good for kids to hear twice.”

Legacy’s college-like block schedule makes the co-teaching effort possible. Each class at Legacy meets three times a week, which leaves gaps in daily schedules, allowing students to get extra help in a tough class, run on the track or hit the weight room, sign up for music class to learn an instrument or just hang out in the school’s lunchroom.

In this case, it allows Schultz, who normally teaches math, to come and help co-teach the class. Schultz still has a full teaching schedule, but some of his tutoring time is diverted to co-teaching with Thornton.

Two months into the class, Weltz said he’s already changing the way he treats money. By his estimate, since the school year began he’s saved $70 by cutting down discretionary spending on things like Starbucks.