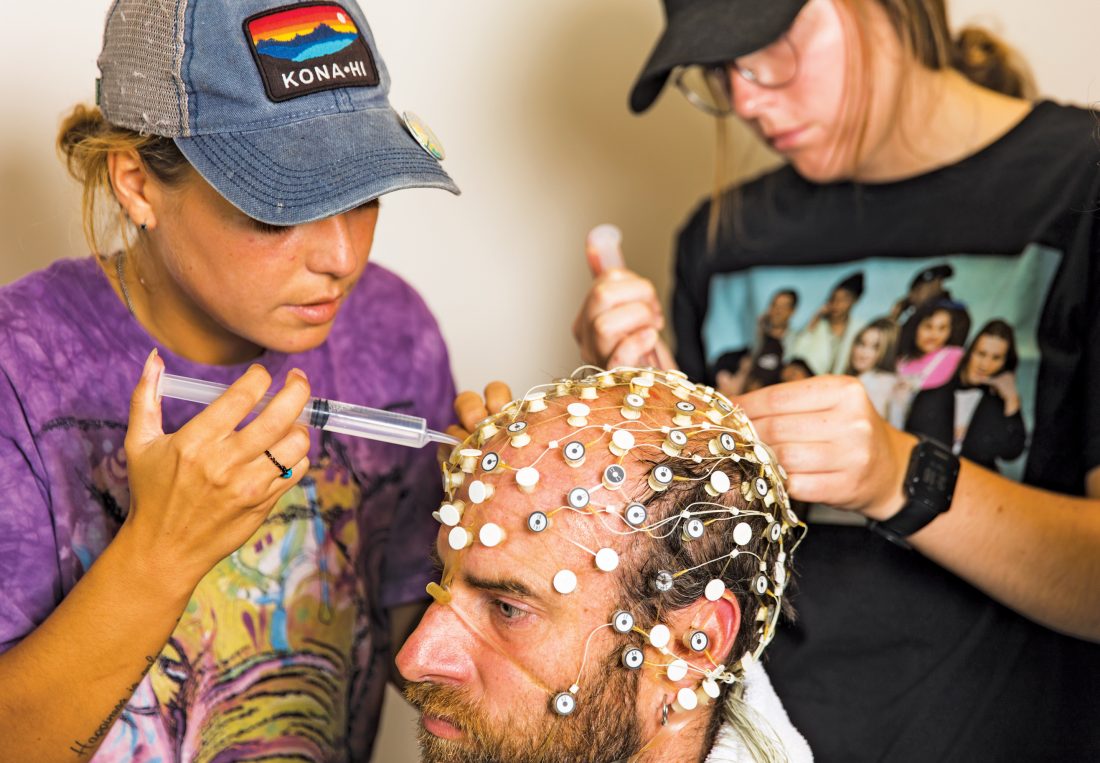 The funding supports an additional testing component related to his research on the neuroscience of anxiety disorders and the impacts of a treatment called attention bias modification. Carlson’s project previously secured a prestigious $350,000 grant from the National Institute of Mental Health.

Anxiety disorders are not occasional bouts of worry or fear. They endure and can worsen over time, potentially interfering with job performance, schoolwork and relationships. A cardinal feature of anxiety is an elevated attentional bias to threatening information.

If an individual with anxiety is shown side-by-side computer images of two distinct facial expressions — one fearful and one neutral — she will typically fixate on the fearful image. But if a dot flashes behind the neutral image, it may redirect her focus. And if this dot-probe task is done repeatedly over six weeks, there appears to be a decline in anxiety symptoms for some subjects.

“Research indicates that attentional bias to threat is not only correlated with anxiety, but causes related symptoms,” Carlson said. “Yet the primary treatment options of SSRI medications and cognitive behavioral therapy are not aimed at reducing attentional bias. ABM is promising because it’s easy, practical and can be disseminated to a large number of patients.”

In the fall of 2017, Carlson and students in his Cognitive and Affective Behavior Integrative Neuroscience Lab embarked on the first attempt to link ABM-related changes in brain function to underlying structural changes in the brain’s neuroplasticity. Identifying these biomarkers is important in understanding why ABM treatment is successful for some who suffer from one of the most common psychological disorders, but not for others.

Carlson said other studies have looked at functional MRI changes in brain activity following ABM, but the results haven’t been consistent and activity in the brain is dependent on what a person is doing and feeling at that particular moment. Structural changes aren’t susceptible to those types of influences. Their relative stability enables them to better predict behavioral change.

The lab is recruiting 100 individuals for the initial study. Half complete six weeks of at-home training using the NMU CABIN mobile phone app version of attention-bias modification. The other half serve as the control group. All undergo MRI pre- and post-training assessments. The preliminary results were promising.

“There was an increase in gray matter in the pre-frontal areas of the brain more involved in cognitive control,” Carlson said. “We think that increases the ability to control the automatic tendency of those with elevated levels of anxiety to divert attention to threat-related stimuli. The Peter White Scholar Award will support a third round of tests a month after the training to see if the initial findings persist. That will tell us if six weeks of ABM training is enough to elicit long-lasting changes, if booster sessions would be sufficient to maintain the positive effect or whether continual training is required.”

Carlson and students will conduct a third round of MRI testing this fall on up to 30 subjects with elevated anxiety who are 18-42 years of age and right-handed. He said the brain is “lateralized differently” for left-handed individuals, so consistency is needed to avoid variables that may skew the results. The results from testing a month after the training could be a step toward securing additional support from the NIMH.

“Most funding agencies that are going to award large amounts of money want to see that you’re on the right track,” he said. “They want some preliminary data that suggests what you want to do is going to be successful and effective. Then they’re more likely to fund it. Even without additional NIMH grant support, this study in itself will be an important contribution to the field and to the related literature.”

CABIN is composed of about 20 undergraduates from various disciplines and five to seven graduate students. They have collected attentional bias data from more than 500 participants over the past few years. They also have assisted in the analysis of functional and structural neuroimaging data presented at national conferences and have coauthored published manuscripts of structural MRI data.

“Generally there aren’t many opportunities for undergraduates to receive training in using MRI as a research tool in cognitive neuroscience, but Northern students are doing that,” Carlson said. “They are helping to move the field forward by identifying where neuroplasticity is taking place.”

Northern’s Peter White Scholar Award is intended to support faculty with a proven scholarly record who are undertaking a project that would significantly advance her/his work. Projects funded by the award are intended to go above and beyond those funded under the faculty grants program.