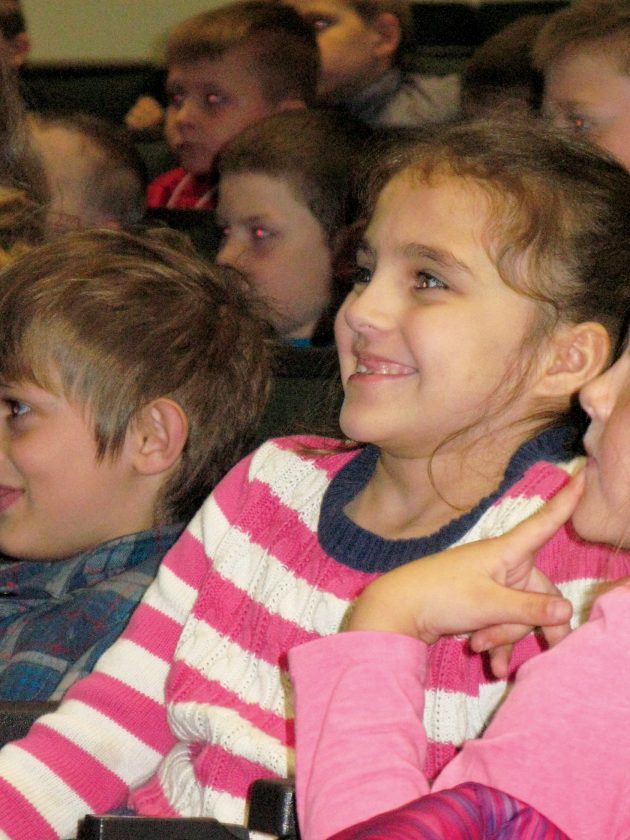 MARQUETTE — What kid wouldn’t be intrigued by a “Creepy Pair of Underwear?” or “President Squid”?

The mind behind those children’s books, Chicago author Aaron Reynolds, was in town this week for the annual Marquette-Alger Young Authors Conference, which was to include special presenters, book signings and crafts for local youngsters.

“We bring in an author that inspires all of our young students from junior kindergarten through fifth grade,” said Sarah Juday, co-director of the conference along with Katie Ferguson. “We get them really excited about writing, and we show them that writing’s not just about, ‘You need to have perfect spelling and everything.’ It’s about writing, and writing down many different drafts or writing poems or writing songs.”

The conference, which has taken place since 1975, runs through Thursday, with different grades attending each day, she said. It attracted students from a variety of schools and districts, including Aspen Ridge Elementary School in west Ishpeming and Gwinn Area Community Schools, among others.

Youngsters already have gotten in a little bit of creative scribbling.

“They write their own books throughout the year,” Juday said, “and so when they come, they get to share their books with a pen pal class that they met.”

For example, one young kindergarten student wrote about puppies, pizza, winter and sharks in an “I Like” book.

“As you go along, the books get more elaborate,” Juday said.

The youngsters also had the opportunity eat at Northern Lights Dining at NMU, just like the college kids.

“It’s just a fun day to celebrate writing, their hard work, and just get them inspired again,” Juday said.

Reynolds kept the students entertained and engaged by talking about his writing process.

He didn’t start out as an author. Instead, he started out as a kid much like them, who liked to watch cartoons, play video games and go to movies.

“I was a kid who hated books,” Reynolds said, which elicited gasps from the young crowd. “You’re like, ‘Not cool, Aaron.'”

What caused this disinterest?

“When I was your age, believe it or not, I don’t remember anyone ever reading a book out loud to me,” Reynolds said.

He wasn’t disparaging his parents; they just weren’t readers.

What changed his opinion of books was a fifth-grade teacher, Mr. Hunter.

“Mr. Hunter read a book out loud to us every single day in fifth grade,” Reynolds said.

He recalls the first book his teacher narrated: “Ramona the Pest.”

Mr. Hunter would read one chapter a day.

“He’d put his little bookmark in little book, close up little book, put book on the corner of his desk where it lived until tomorrow, and I was like, ‘How am I supposed to sleep tonight? I need to know what happens next,'” Reynolds said. “From that moment forward, I was nuts for books.”

As an author of 36 books, Reynolds realized where everything changed: Mr. Hunter.

“He is the one who inspired me to love books,” Reynolds said.

And that inspiration, he stressed, has to come in their heads and hearts.

His latest book titled “Dude!” is a one-word picture book illustrated by Dan Santat, who had the idea of putting “word by” instead of “written by” on the cover.

The storyline consists of two surfing animals who, obviously, say “dude” a lot.

How did Reynolds sell this one-word idea to a publisher?

The tale involves the animals encountering a shark in the water, which turned out to be a friendly shark. After giving the fish an ice cream cone, the shark in turn allowed them to surf on its body after their surfboards broke.

Reynolds read the book to the kids in an animated way, even using the “Jaws” theme to say “dude” when the shark made its appearance.

“Was I able to write a story with a beginning and a middle and an end with just one word?” he asked the students.

“Yes,” was the resounding answer.

Perhaps there was a life lesson to be learned as well.

“They did make friends with him because he wound up saving the day,” Reynolds said.