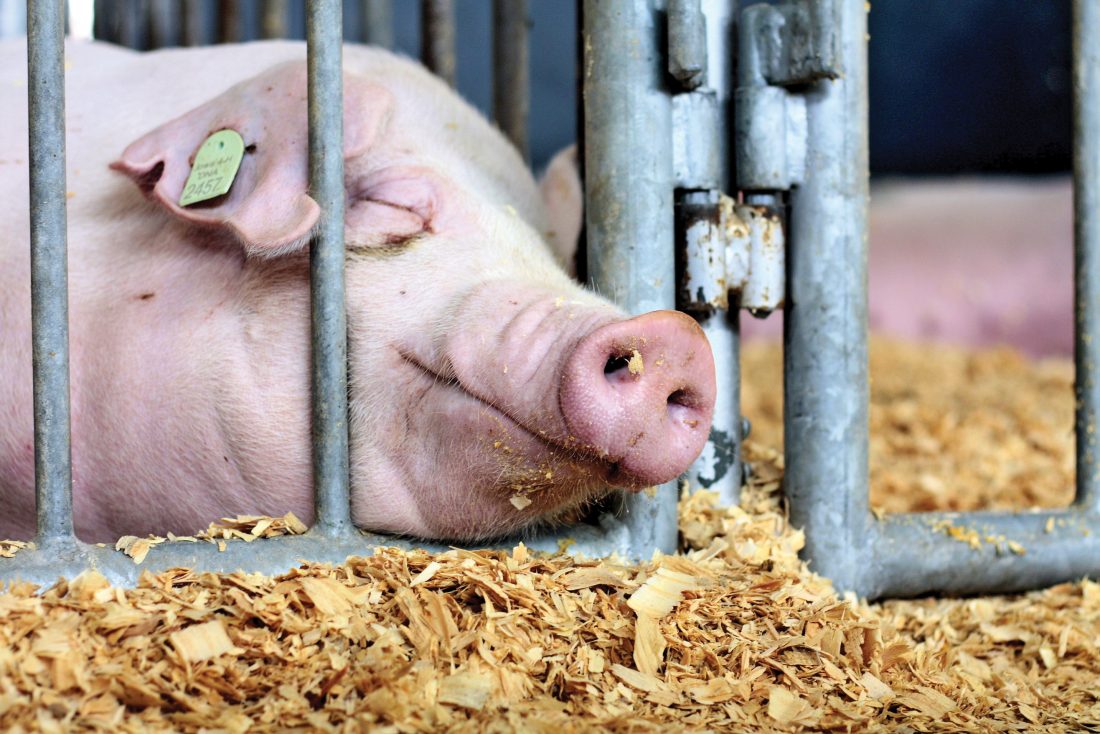 A pig is pictured at a state fair. This summer, health officials are spreading the word about precautions fair visitors should take when encountering pigs, as three cases of swine flu were reported in Michigan during 2018 by people who had direct or indirect contact with pigs. Some recommended precautions include washing your hands before and after being near pigs; avoiding eating or drinking in a livestock barn and refraining from bringing toys, pacifiers, cups, baby bottles, strollers or similar items into pig area. (Images by Phil Roeder used under Creative Commons Attribution 2.0 Generic license)

MARQUETTE — With three pigs at a Lower Michigan fair confirmed to be positive for swine influenza by Michigan State University’s Veterinary Diagnostic Laboratory Friday, health officials are spreading the word about the need to take precautions while visiting pigs during fairs this summer.

“All swine, even those that appear healthy, have the potential to carry influenza virus,” Dr. Joneigh Khaldun, Michigan Department of Health and Human Services chief medical executive and chief deputy director for health, said in a press release. “Washing your hands thoroughly before and after being around swine protects both you and your family from the risk of influenza virus, and also helps keep the swine healthy.”

Precautions that can be taken at fairs and other livestock showings include avoiding eating or drinking in livestock barns or show rings; refraining from bringing toys, pacifiers, cups, baby bottles, strollers or similar items into pig areas; reducing the spread of germs by avoiding touching of your eyes, nose and mouth; avoiding contact with pigs if you have flu-like symptoms, officials said.

Other tips to reduce the spread of disease include staying home from work or school if you are sick; avoiding close contact with people who are ill; washing your hands often with soap and water or using an alcohol-based hand sanitizer if soap and water are not available and covering your nose and mouth with a tissue when coughing or sneezing, then throwing the tissue in the trash and washing your hands.

Those who are at a high risk of serious flu complications should avoid pigs and swine barns if planning to attend a fair or another event with livestock, MDHSS officials emphasized.

It’s important to take these precautions, officials said, as influenza viruses carried by pigs can infect humans, although it is rare.

“We always cautiously monitor flu strains which can be transmitted to human populations as these strains can change in terms of severity and transmissibility,” Marquette County Heath Department Medical Director Dr. Teresa Frankovich said in an email.

While swine influenza viruses usually don’t infect humans, human infections have been reported, with three cases of swine flu reported by individuals who had direct or indirect contact with pigs at fairs and exhibits in Michigan during 2018, according to the MDHHS.

However, Frankovich said, she is not aware of any Upper Peninsula cases of swine flu.

Nationally, 17 people from six states, including the three in Michigan, were sickened by variant influenza viruses after having direct or indirect contact in 2018. Since 2010, 466 cases have been confirmed nationally. While the cases have been “mostly among children,” all age groups have been impacted, MDHHS officials said.

The method of transmission for swine flu is similar to the way flu is transmitted human to human — it can be spread through contact with droplets from an infected pig that has coughed or sneezed.

Furthermore, there have been a few reports of individuals infected by a pig spreading the virus to another person, MDHHS officials said. However, swine flu cannot be contracted from eating properly prepared pork products or handling pork products.

While routine testing of all swine for swine flu is “not typically done,” Frankovich said, noted “owners are encouraged to monitor their livestock for signs of illness. Pigs can carry the infection even without signs of illness.”

Prevention is particularly important for swine flu, officials said, as “there is no human vaccine for swine influenza and the seasonal flu vaccine will not protect against it.”

While there is no vaccine, antiviral drugs such as Oseltamivir and Zanamivir can be effective treatments, according to the MDHHS.

“Early treatment works best and may be especially important for people with a high-risk condition,” a press release from MDHHS states.

Populations that are at a higher risk of developing complications from the disease include: children younger than five years of age, people 65 years of age and older, pregnant women and people with certain chronic health disease, such as asthma, diabetes, heart disease, weakened immune systems and neurological conditions, MDHHS officials said. Furthermore, people these groups who experience an influenza-like illness after exposure to swine should contact their doctor as soon as possible, they said.

While this might make swine flu difficult to distinguish from a normal case of the flu, there are a few key factors that can determine whether or not swine flu should be suspected, Frankovich said.

“This is a less common time of year for seasonal flu so a healthcare provider might suspect an unusual strain and inquire about swine exposures such as fairs/farms and test for this strain,” Frankovich said. “Of course it is most helpful if patients who develop the typical signs and symptoms of flu and have had recent exposure to swine reach out to their healthcare provider.

Overall, Frankovich and MDHHS officials urge the public to take precautions around pigs and encourage those who have a flu-like illness after pig exposure to contact their doctor and the local health department for influenza testing and treatment.

For more information on swine influenza, visit the CDC website.

For information about swine influenza in pigs, contact the Michigan Department of Agriculture and Rural Development at 800-292-3939.