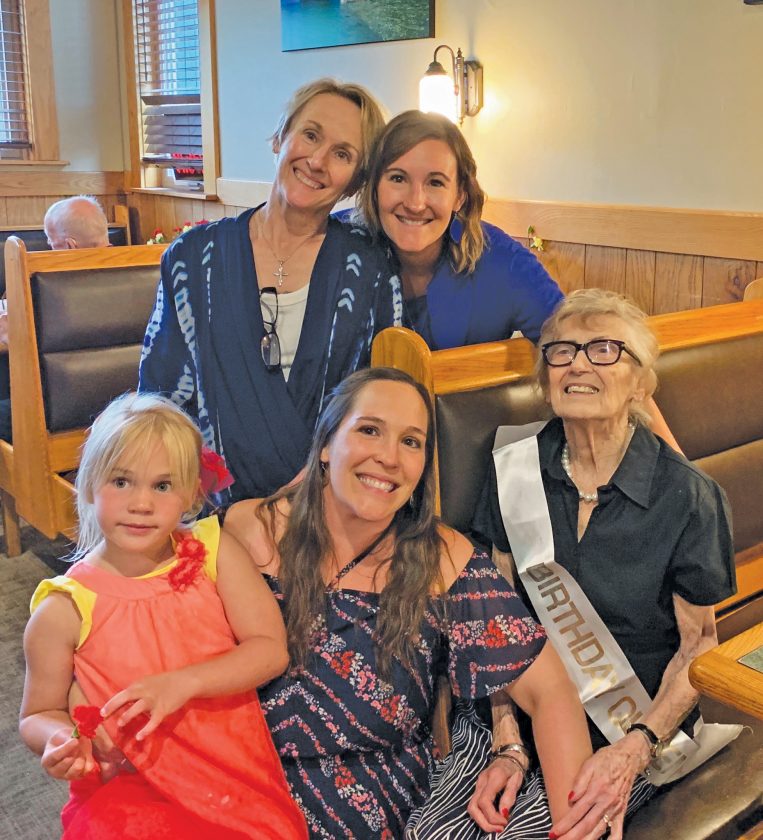 Paul and Ora Vardigan share a laugh at their 75th wedding anniversary. The couple would soon be parted as Paul Vardigan passed away in 2013 at 98. Ora Vardigan remains witty and strong at Mill Creek Senior Living Community with the cherished memories of her marriage and the company of her children, grandchildren and great grandchildren. (Photo courtesy of Jenna Zdunek)

Married in 1939, Ora and Paul Vardigan were together for 75 years. Paul Vardigan husband lived until he was 98 while Ora Vardigan just celebrated her 100th birthday on Sunday. (Photo courtesy of Jenna Zdunek)

From left, Ora Vardigan shares a big smile with her granddaughter Ashley Weber at her 100th birthday celebration party at Vango’s on Sunday. (Photo courtesy of Jenna Zdunek)

Ora Vardigan is seen in her younger years. (Photo courtesy of Vardigan family)

MARQUETTE — When Ora Vardigan turned 100 years old on Sunday, she didn’t want to admit it. But the century birthday is quite a milestone.

So how does it feel being 100 years old?

“I don’t know because I don’t stop to think about it,” she said.

At 100, Varidgan is the oldest resident at Mill Creek Senior Living Community and requires little care, her daughter Bonnie Miketinac of Escanaba said.

As the only daughter out of Vardigan’s five children, Miketinic said she has a special bond with her mother and it’s especially meaningful to still have her mother in her life. 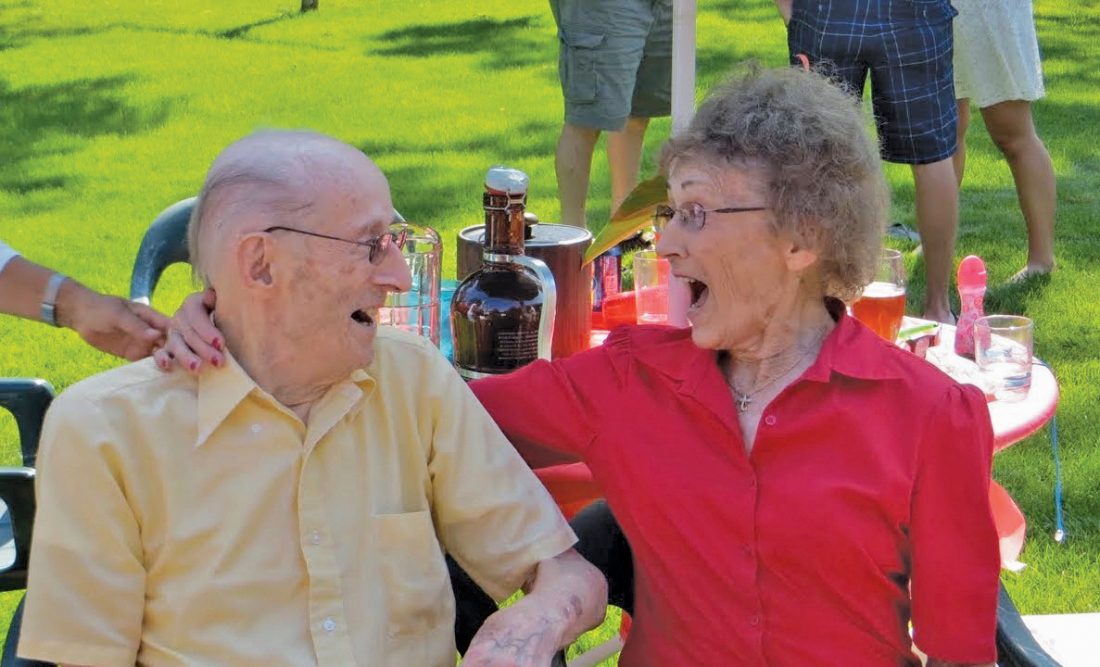 Paul and Ora Vardigan share a laugh at their 75th wedding anniversary. The couple would soon be parted as Paul Vardigan passed away in 2013 at 98. Ora Vardigan remains witty and strong at Mill Creek Senior Living Community with the cherished memories of her marriage and the company of her children, grandchildren and great grandchildren. (Photo courtesy of Jenna Zdunek)

“It feels beautiful; she’s my best friend. So I always prayed that my dad would make it to 100,” Miketinac said. “He was also a picture of health, but he did not. So I’ve been praying she’d make it to 100 and she did, so it’s a great feeling.”

To celebrate, Vardigan’s family took her out to Vango’s in Marquette on Friday afternoon for lunch and a glass of light beer, as she still likes to enjoy a Coors Light beer.

Born on June 19, 1920, Ora May (Ray) Vardigan was the youngest daughter of seven children who grew up on a hobby farm in Cornell, Michigan.

Her father owned Ray’s Bar, which has since been torn down and turned into The Rusty Rail.

She met her eventual husband, Paul Vardigan while attending school. While he was just five years older than her, he was her eighth-grade teacher and was also a close family friend. 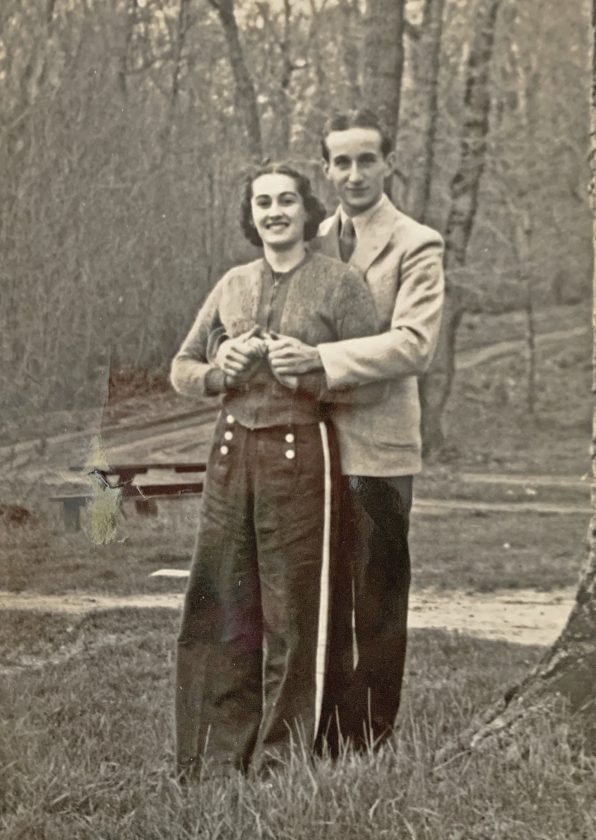 Married in 1939, Ora and Paul Vardigan were together for 75 years. Paul Vardigan husband lived until he was 98 while Ora Vardigan just celebrated her 100th birthday on Sunday. (Photo courtesy of Jenna Zdunek)

After eighth grade, she continued her education in Escanaba and lived with her aunt. Paul Vardigan would pick her up on the weekends so she could spend time with her family.

Years later, the pair fell in love at a midnight Mass during the Christmas season and they married in 1939 when she was 18 years old.

The couple would spend 75 years together until Paul Vardigan passed away at 98 in 2013. They raised five children together and would live most of their lives together in Delta County.

When she was 38 years old, Vardigan gave birth to a set of twins — one of her proudest moments.

After having her three sons, she said, “I had to have another son to get my daughter.” 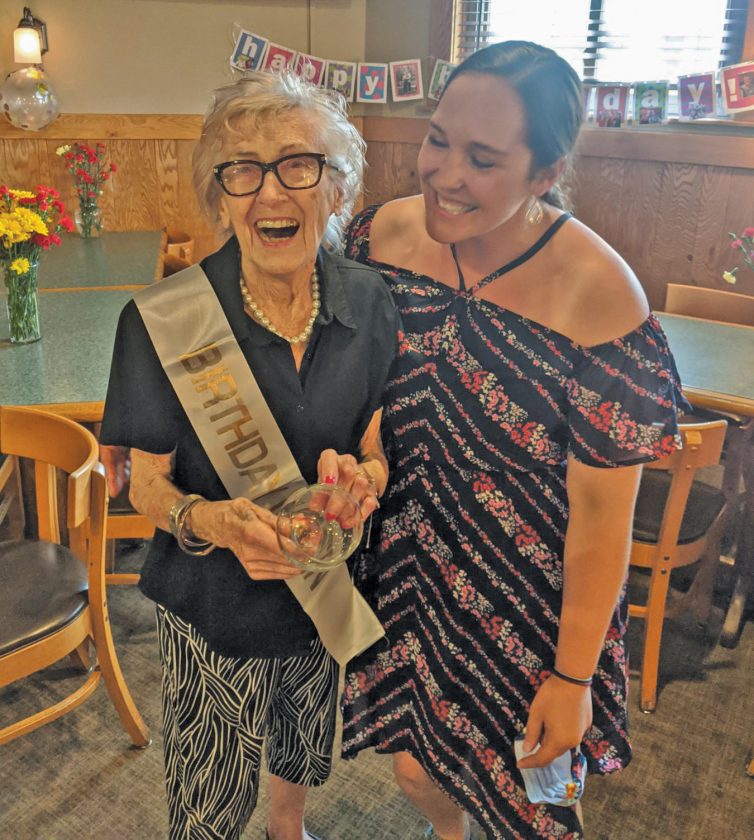 From left, Ora Vardigan shares a big smile with her granddaughter Ashley Weber at her 100th birthday celebration party at Vango's on Sunday. (Photo courtesy of Jenna Zdunek)

When Ora saw her doctor after the birth of her twins, she told him she didn’t know whether to hug or hit him.

And it’s thanks to those 75 years with Paul Vardigan that Ora Vardigan has remained strong, tough and spunky throughout her life, Miketinac said.

He brought her flowers every Friday and they went out to eat fish dry on Friday nights. Her husband kissed her goodnight each night, Miketinac said, adding he was the most kind, patient and forgiving man.

“I feel, and my mom also does, that the reason for her longevity — aside from good genes — is the fact that she was married to an amazing man for 75 years, who probably never even raised his voice at her. (He) just treated her with the utmost respect,” she said.

The couple also was very active and walked the athletic field in Escanaba and polka danced on a daily basis, the Vardigans’ granddaughter Jenna Zdunek said. 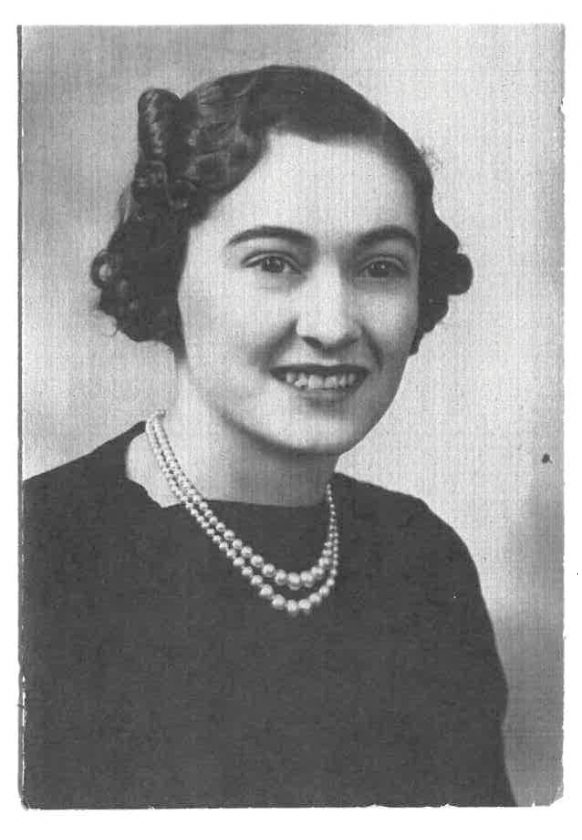 Ora Vardigan is seen in her younger years. (Photo courtesy of Vardigan family)

“It’s just amazing to me how in love they were until the day he died, like they just had this unbelievable loving relationship. It’s been hard for her since he passed and moving to Marquette, and it’s been a hard seven years that she’s been here for sure without him,” Zdunek said. “(But) the memories of her and my grandfather and then her children, grandchildren and great-grandchildren and my mom (keep her going).”

With no serious ailments to speak of, Vardigan remains a strong, proud woman who still doesn’t use a walker, Zdunek noted.

Ora Vardigan moved to Mill Creek several years ago, and spends her days keeping busy, whether it’s walking around, folding laundry or writing about people.

“(She’s) a tough lady and very spunky but at the same time, very loving,” Zdunek said. “And she’s very honest; I mean she tells it how it is, she’s been like that her whole life.”

Celebrating her 100th birthday with a small family group outside of Mill Creek was a welcomed activity since the pandemic has left many residents without regular opportunities to see family and friends.

Though Vardigan is now quarantining for two weeks, the luncheon was just the ticket to commemorate a century’s worth of memories.

“It’s so special, especially just because I had such a close relationship with her my whole life. So it’s amazing and it makes me feel really good about my genes. I hope I get even close to that,” Zdunek added.

With such a close mother and daughter relationship, Vardigan calls Miketinac several times a day and Miketinac visits her at her window.

Though recent years have been difficult without her husband of 75 years, Ora Vardigan is important to not only her family but to everyone that knows her, Miketinac said.

“My dad was the sociable one. So she is very guarded but once you get to know her, she would be the best friend anyone could ever have,” she noted.

While giving her a pedicure for her 100th birthday, Vardigan said it’s about time that she had her toenails painted, adding, “I better not wait any longer,” she said.

Vardigan’s feisty energy and the love she has for her five children, 12 grandchildren, seven great-grandchildren and nieces and nephews is what she’s most proud of, she said, and it’s the inspiration that drives her forward.

For the younger generation, she said it’s important to keep going, and “don’t lay around” waiting for something to happen.

“Don’t get too mad. Don’t think about things too much or hold on to them too long,” Vardigan said. “I have no regrets. I don’t think that way. I keep moving forward, never backward.” 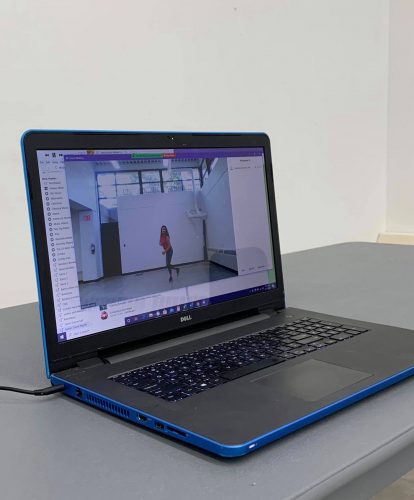 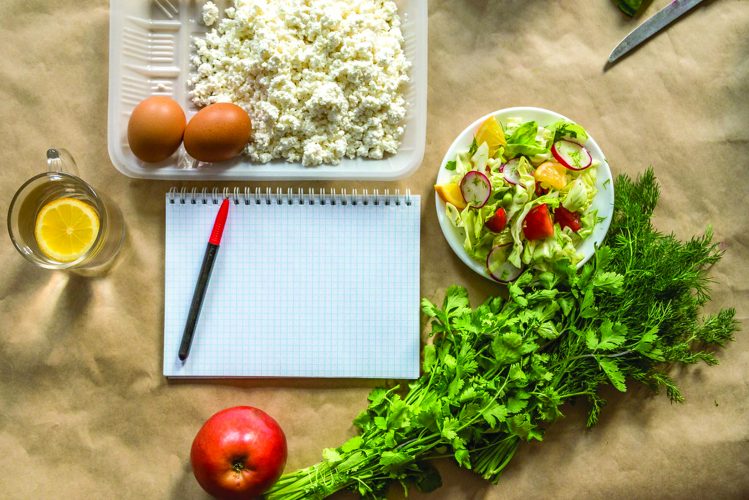