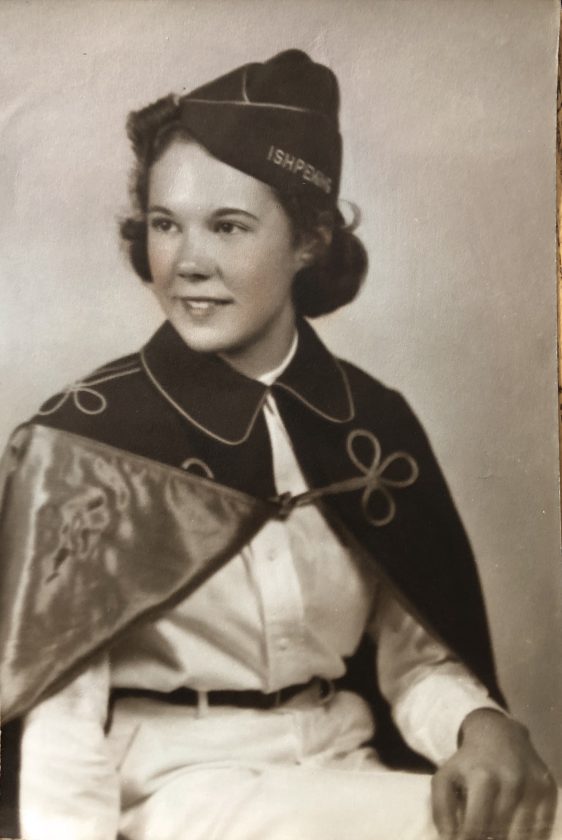 Verna Holmgren (above) poses in her American Legion Drum & Bugle Corps uniform, which are currently called the Blue Notes, at around 15 years old. Holmgren joined the organization when she was in fifth grade. (Photo courtesy of Verna Holmgren)

MARQUETTE — Of all the moments that shaped the 20th and 21st century, there are very few people who were there to share the stories of the ’20s, the Great Depression, World War II let alone the Cold War, President John F. Kennedy’s assassination and the ’70s. Though Verna Holmgren said she lived “just an ordinary life,” she’s witnessed 98 and a half years of evolving culture, fashion, societies and world.

Though 98 and a half she may be, Holmgren continues to stay busy as she still lives at home, makes pasties for the Wesley United Methodist Church of Ishpeming, sews her own curtains and pillows, exercises daily and spending time with her children, grandchildren, great-grandchildren and great-great-grandchildren. And in the summer, she may be holding a golf club, ready to nail the ball into the whole.

But for someone who has the spirit of a 25-year-old, one might wonder where she gets her enthusiasm from. 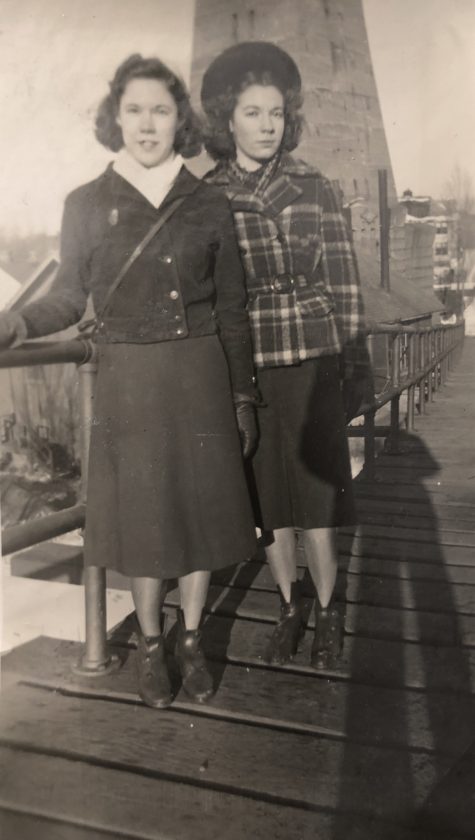 Verna Holmgren (left) with her sister Shirley stand in front of Cliffs Mine Shaft in Ishpeming when it was still in operation. Their father worked for the Oliver Iron Mining Co. (Photo courtesy of Verna Holmgren)

“You know I’ve always been an optimist. And I never realized that until I came up against a pessimist,” she said. “They just get you down the way they think. I thought I’m always looking at the bright side of stuff. They run their life (by) ‘what if?’ … you can always be waiting for something bad to happen and it doesn’t always happen.”

Born in 1921, Holmgren grew up on the north side of Ishpeming with her younger sister where her father worked for the Oliver Mining Co. and her mother was a stay-at-home mom. Entering high school during the Great Depression left an impression on her, Holmgren noted, adding that’s why she is so “frugal.”

In fifth grade, Holmgren joined the American Legion Drum & Bugle Corps and said she enjoyed playing for various conventions around town. Music continues to be an aspect that keeps Holmgren bubbly, as she still listens to her favorite Frank Sinatra, classical band compositions and western music. Even though she’s older, she said she still enjoys jamming her car radio when she goes out for lunch with her friends every Tuesday or driving to Walmart to pick up her groceries.

As spunky as she appears, Holmgren said she decided who she was going to be as a teenager. And it all began with a little puff from a cigarette.

“When I was a teenager and we were learning to smoke, I thought well I’m going to learn how. And I’m going to learn how to inhale deeply,” she said, rumbling a grunt under her breath. “But then I’m going to quit because I’m not going to be bullied by your friends (who said,) ‘Haha, poo-hoo you don’t even know how.’ I can tell them, ‘Yeah I know how. Give me one.’ And then they shut up and they never bullied you again.” 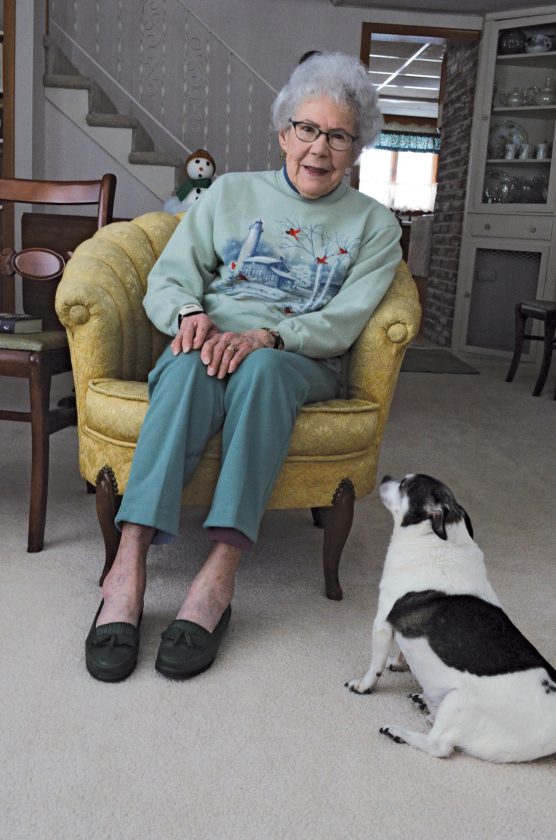 Now 98 and a half years old, Verna Holmgren (above) enjoys making pasties for the Wesley United Methodist Church in Ishpeming, visiting with her family, reading mystery novels and spending time at home with her dog Gizmo. (Journal photo by Jackie Jahfetson)

Holmgren’s comedic and light-hearted nature vibrated as she sipped on her coffee.

After graduating high school in 1939, Holmgren landed a job at the H.W. Gossard Co. in Ishpeming where she manufactured corsets and brassieres. At 20 years old, Holmgren married her husband Wilfred Holmgren, who she knew since eighth grade when they first met each other at an ice rink. The two settled together, purchased a house and after she gave birth to her son David, she quit working at the Gossard. She then had her daughter Joan, 17 months after.

As World War II was looming, one by one, men were drafted. By 1943, Wilfred Holmgren was called to Italy and was sent out the day after Verna Holmgren gave birth to her third child, her daugher Julianne.

“During that time you had food stamps and gasoline stamps, everything you had and when your stamps were gone, you couldn’t get that product. You were just allowed so much,” Holmgren said.

After his safe return home from the war, Verna Holmgren said they then purchased a house, kitty-corner to her parent’s home. Ishpeming has always been home, Holmgren said, noting that she’s more of a “homebody.”

But world events continued to echo and shake Ishpeming, she added.

“I remember when Kennedy was killed. I was home from work that day, in fact I was right there at the sewing machine,” she said. “I even remember where I was. And it was such an awful thing.”

One of the scariest times Holmgren said she lived through was the Cold War, the threat of communism and how the Russians were trying to take over the world as the Germans attempted in World War II.

Though those worldly events left an impact on her, Holmgren said her life has been blessed with many good memories of raising three children, spending summers at their family’s former camp on the Dead River Basin and being married to her late husband for 65 years.

When asked how she maintains her tough, strong woman presence, she said it’s all about holding your grit.

“I never was a crier. Somebody mentioned to me crying is just self-pity so I guess after that I didn’t cry very much, but I can cry when I’m emotional,” she said with a giggle. “I get emotional sometimes and I’m crying. But when it’s just a heartbreak of my own, I don’t.”

Even when her husband passed away in 2006, Holmgren said she continues to not let life events get her down. It’s all about facing facts, she repeated.

“It’s so easy but some people don’t want to face the facts, the consequences and what’s going to happen. And (they) keep putting off a decision if you have to make a decision. It’s always nice to get at the decision and then you can forget about it. Trust in the Lord that you made the right one,” Holmgren said.

Though she’s 98 and a half, she doesn’t let anyone do what she can’t do herself. With 15 surgeries — lung and back surgeries in recent years — it’s astonishing even to Holmgren how she’s been blessed. But even now, she said she “eats like a horse.”

“I don’t feel like I’m old. I can’t believe I’m this old. I mean I have a little bit of pain when I get up in the morning in one leg, but in half of an hour, it’s gone completely … I’ve been just so fortunate,” Holmgren said. “I feel so sorry when I see people that have so much pain and challenges through their life with their legs.”

As she took another sip of her coffee and looked up, she said she’s lived more than enough of a fulfilling life.

“… sometimes if I get a little bit out of breath, I think, ‘Maybe this is it,'” she said, holding her breath then letting out a giggle. “I can’t expect more. I don’t know, why me? It’s a mystery to me.”

“I think you should kind of plan out your life a little bit about what kind of person you’re going to be. Don’t just slip into something and let it happen,” she noted. “You have to take charge of yourself. There are boundaries you know you should not break. And if you do there’s a consequence. Pay attention to the handwriting on the wall.”

Verna Holmgren (above) poses in her American Legion Drum & Bugle Corps uniform, which are currently called the Blue Notes, at around 15 years old. Holmgren joined the organization when she was in fifth grade. (Photo courtesy of Verna Holmgren)

Verna Holmgren (left) with her sister Shirley stand in front of Cliffs Mine Shaft in Ishpeming when it was still in operation. Their father worked for the Oliver Iron Mining Co. (Photo courtesy of Verna Holmgren)

Now 98 and a half years old, Verna Holmgren (above) enjoys making pasties for the Wesley United Methodist Church in Ishpeming, visiting with her family, reading mystery novels and spending time at home with her dog Gizmo. (Journal photo by Jackie Jahfetson) 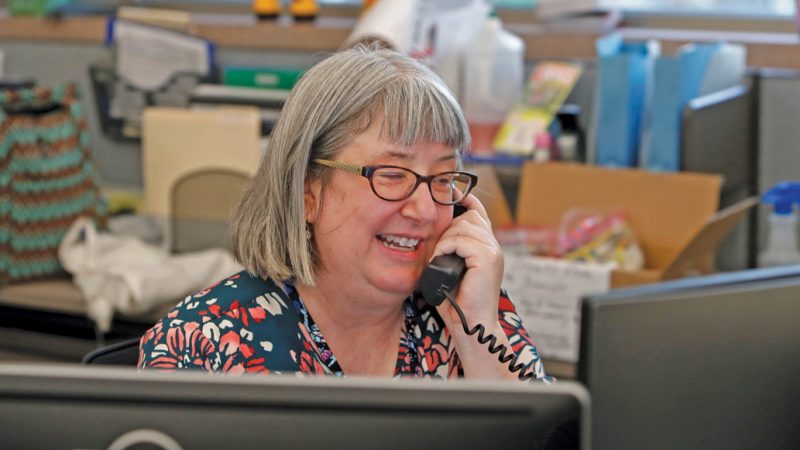 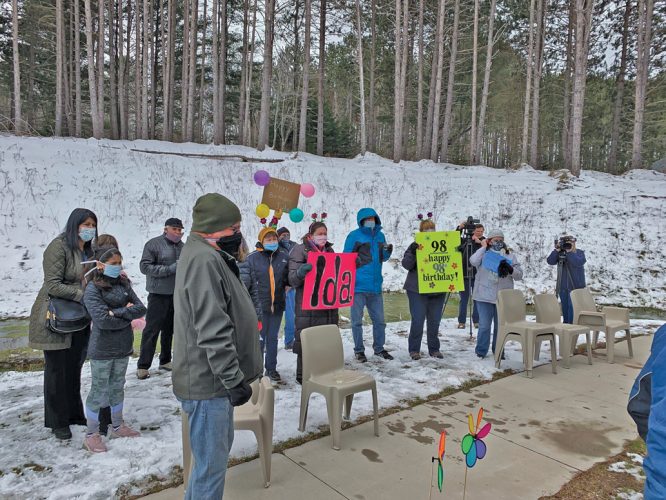 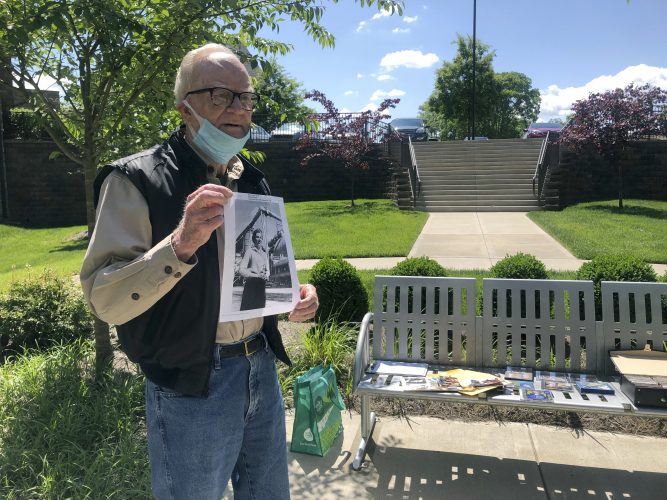 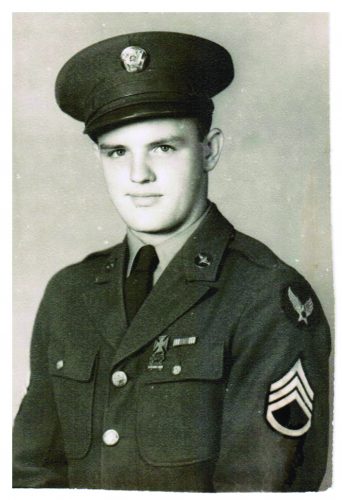 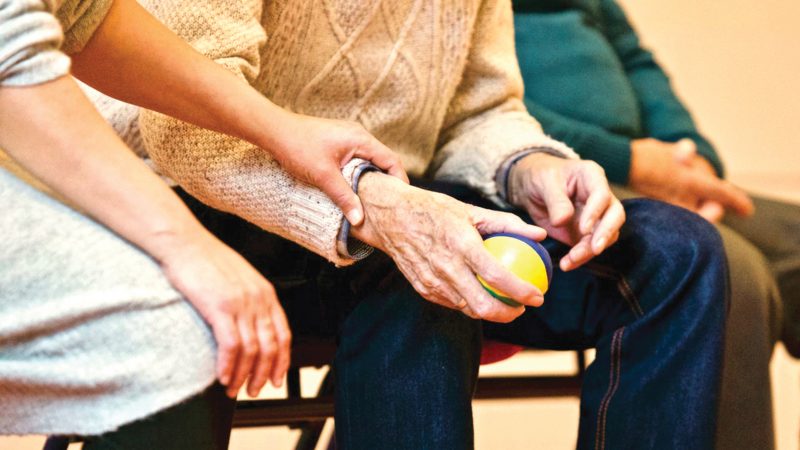