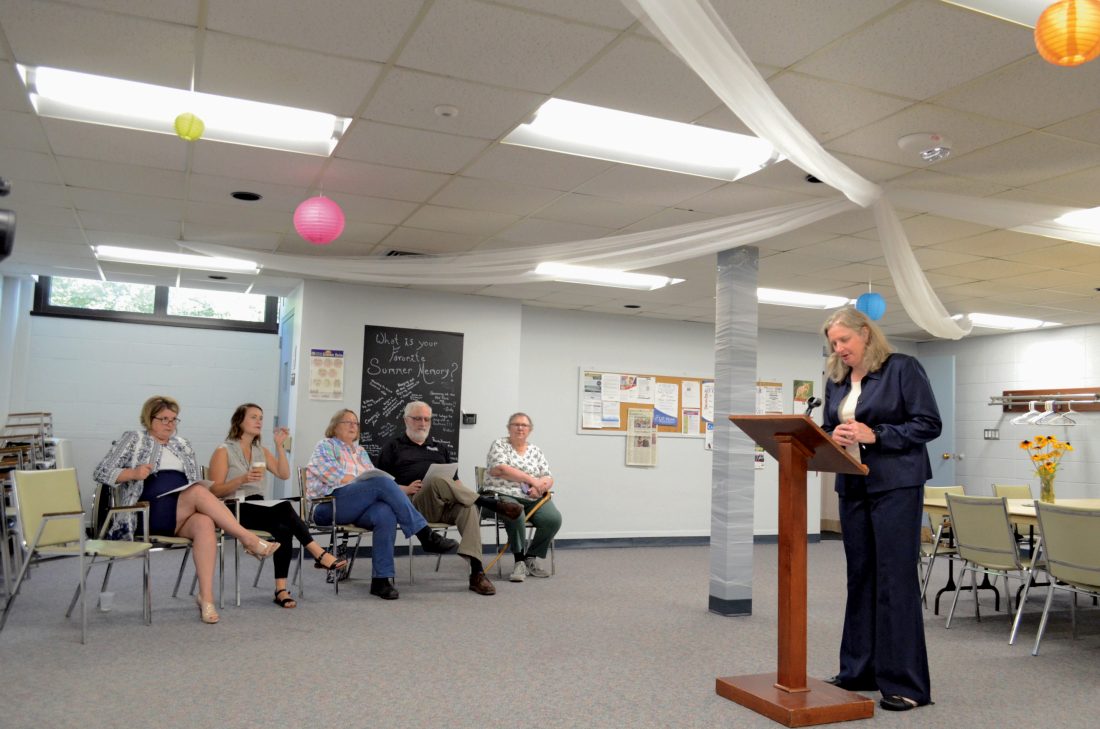 Marquette City Commissioner Jenn Hill, center right, speaks at the podium as she moderates a discussion about Gov. Gretchen Whitmer’s proposal to increase Michigan’s Earned Income Tax Credit. The discussion was held at the Marquette Senior Center Aug. 8 with several local officials, volunteers who work with the AARP Foundation’s tax preparation service, as well as Michigan State University researchers who recently conducted a study on the economic impact of the Earned Income Tax Credit. The group of speakers expressed their support for the proposed increase, citing benefits to working seniors and families in the Upper Peninsula. (Journal photo by Cecilia Brown)

MARQUETTE — For many seniors, a tax refund can make a big difference.

Due to this, local leaders gathered together Aug. 8 at the Marquette Senior Center to discuss Gov. Gretchen Whitmer’s proposed increase of the Michigan Earned Income Tax Credit from 6% to 12% and urge lawmakers to show bipartisan support for the proposed increase.

The Michigan Earned Income Tax Credit is for working individuals and households with low to moderate incomes. The EITC, which reduces the amount of tax owed and may provide a refund to filers, depends on a filer’s income, filing status and number of qualifying children claimed as dependents on the taxpayer’s federal income tax return, according to the Michigan Department of Treasury.

“The Earned Income Tax Credit is important for residents and communities across Michigan in Marquette and across the U.P. The EITC is for people who are working but are struggling to pay the bills,” Hill said. “It helps break down barriers so families who struggle to make ends meet have funds to pay to fix the car, buy more groceries and (pay for) childcare.”

Nearly 750,000 Michigan households received an EITC for the 2017 tax year, Hill said, noting that throughout Marquette, Alger, Luce and Schoolcraft counties, 5,000 families “were able to get the EITC to cover costs like putting food on the table, paying utility bills.”

“In total, the EITC credits returned more than $660,000 back to families that those dollars were then spent in our community,” Hill said. “That’s why a coalition of organizations from across the state recently sent Republican and Democratic lawmakers a letter to put politics aside and support Gov. Whitmer’s proposal to double the earned income tax credit. Under Gov. Whitmer’s proposal, the average rural EITC filer would see a roughly $130 increase on their tax return.”

Throughout the Upper Peninsula, over 20,000 households received the state EITC at an average of around $150, which “pumped more than $2.5 million back into the economic stability for the U.P.’s 15 counties,” LaJoie said.

“While the credit benefits families directly, it does have a ripple effect on our local businesses and communities,” LaJoie said. “The EITC has a significant impact on households that receive it and not only improves their economic security but other outcomes as well. Families that receive the earned income tax credit see improvements in nutrition, educational and economic attainment.”

McFadden was glad to have the discussion hosted by the senior center, she said, as the center “is a community focal point where persons can gather and come together for services and activities which enhance their dignity, support their independence and encourage their involvement with our community.”

“We offer everything from social work services to a foot care clinic, to education, to health and recreation programs,” McFadden said. “We also host a very popular AARP tax preparation service during tax season that helps seniors and other individuals complete their taxes.”

The EITC and proposed increase are important for working seniors, Brich said, noting that in his role coordinating AARP Foundation’s free tax preparation service at the Marquette Senior Center, he’s found “most of them earn under $10,000 a year and even a small amount of earned income credit can actually help them.”

“We do come across many people that do qualify for the EITC credit,” Brich said. “Here last year, it was approximately 10% of our clients; and we serve 320 here in Marquette County.”

Susorney has experienced firsthand the impact of these tax refunds on seniors, she told the group, as even small refunds for the seniors she’s worked with can “bring smiles and the tears to their eyes.”

“I’ve had a client who got a $9 refund that was thrilled because it was $9 in the pocket that otherwise had next to nothing and it would help pay for some more food,” Susorney said. “And that is a reason why I do the tax program and I also truly support the effort to get the EITC doubled and make a little difference to each and every one that qualifies.”

The research conducted by Steven Miller, director of Michigan State University’s Center for Economic Analysis and his colleague Bill Knudson, Product Marketing Economist MSU’s Product Center, indicated the proposed increase would have a major impact around the state, particularly in rural communities, Miller and Knudson said.

“We looked at the economic impact as it relates to small communities primarily. There’s a common misconception that the EITC primarily helps families in urban areas. The fact is, working families in rural communities also stand to benefit greatly from an increased EITC,” Miller said. “In our research, we found that the impacts on rural communities, in terms of increased disposable income and local spending from the EITC, to be significant. As Michigan’s rural households tend to trail urban household incomes, the benefits of the EITC credits are largely skewed toward those rural areas on a per capita basis.”

Across the state, it would result in an estimated impact of around $95 million, if funded through new revenue sources with no negative impact on residents disposable income, according to the study.

From Brich’s own experiences helping rural low- to moderate-income seniors, households and individuals with tax preparation, he said: “in many cases, (the EITC) results in a nice increase of the income that the families get.”

“The EITC is a powerful and effective policy that has significant benefits for the state of Michigan and especially those low- and moderate-income folks,” Brich said.

To learn more about the free AARP tax preparation services offered at the Marquette Senior Center, which are typically offered in the first few months of the year by appointment, call 906-228-0456.

To learn more about the MSU study, visit https://www.canr.msu.edu/resources/michigan-s-earned-income-tax-credit-and-the-rural-economy.

More information about state of Michigan income taxes can be found at www.michigan.gov/incometax. 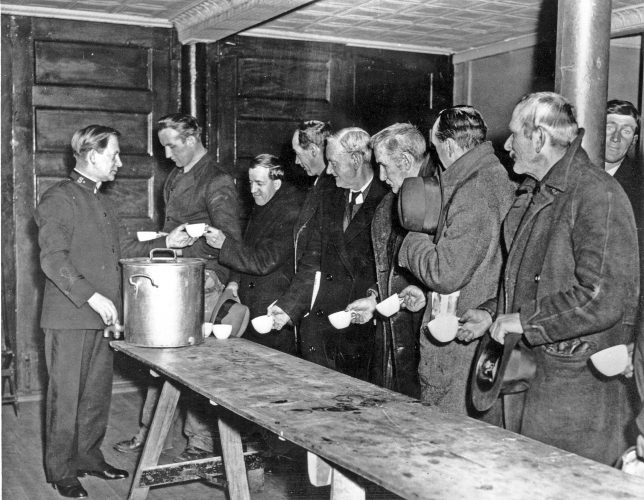 Buddy, can you spare a dime? Echoes of ’30s in viral crisis 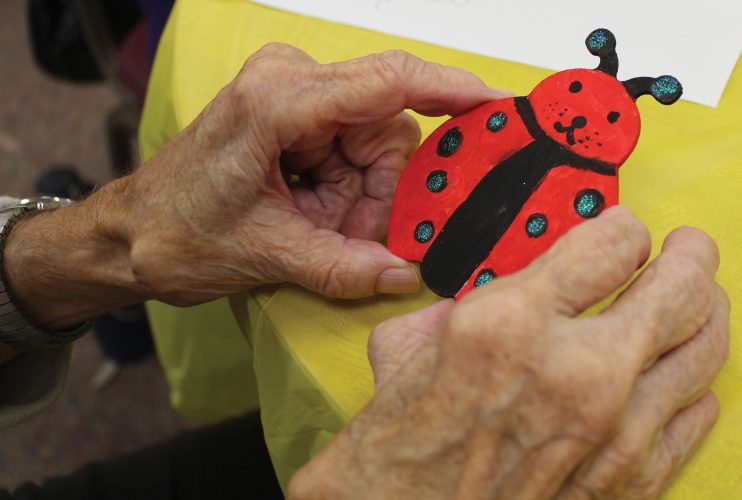 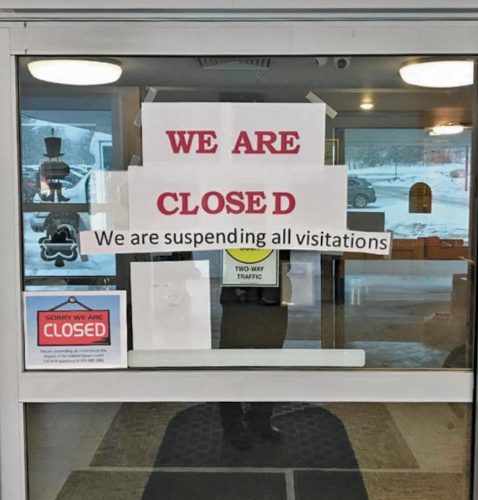 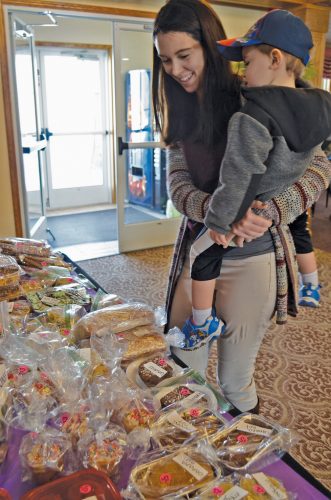