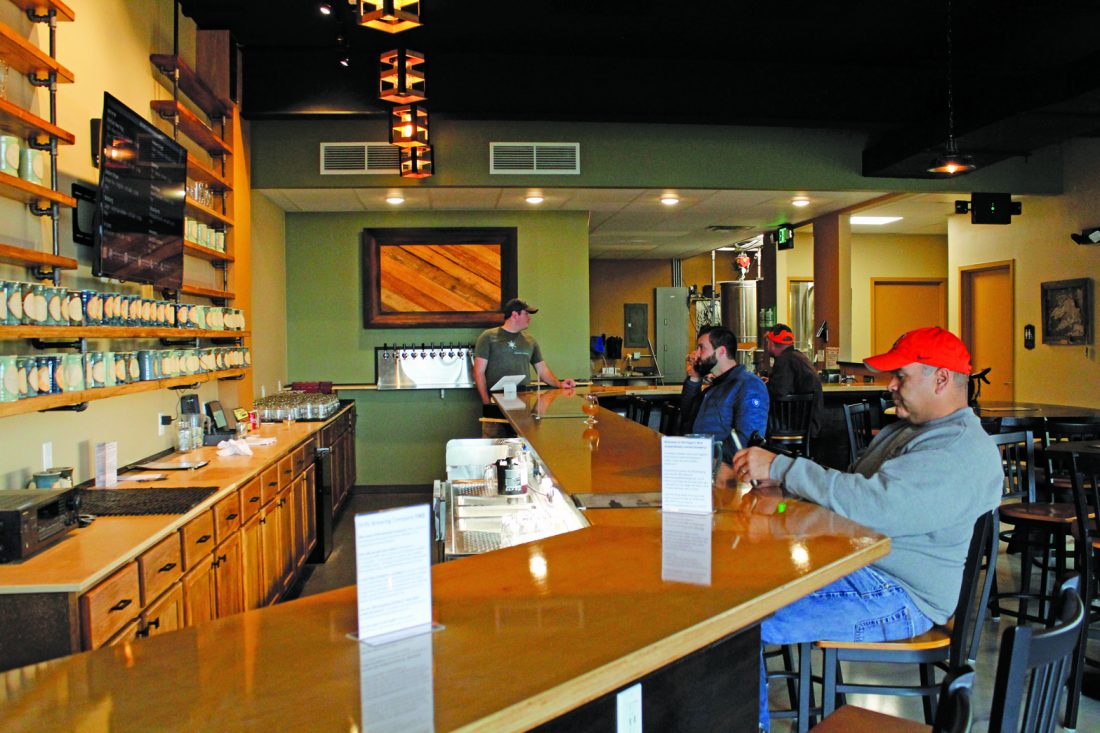 MARQUETTE — Located on South Lake Street in South Marquette, Drifa Brewing Co. officially opened Oct. 3 and is Michigan’s first brewing cooperative. While the brewery came to fruition with the help of hundreds of partial owners, its doors are open to everyone.

General Manager Heather Ludwig said she’s seen customers from every part of the community stop in for a freshly crafted beer.

“I can’t believe the traffic we’ve had come through,” Ludwig said. “The support from the local community in South Marquette specifically is amazing. It feels really good to see some of the friendly faces that I would recognize from the other breweries too. I’m sure you know that it’s a little competitive, but for the most part it’s a cooperative competition. The craft brewing community in general is just very supportive of each other and I think you see that with the guests that have visited.”

With 13 tap lines, Drifa is offering a wide variety of craft beer. On tap currently is Martian Bearhug, a New England IPA; Steep Wheat, a green tea wheat; the Shiras Rye-PA, a pineapple rye IPA; In Irons, a Hefeweisen; as well as other staple and unique brews.

“My main goal is to … continue to be a place where any type of beer drinker can find something that they enjoy,” Ludwig said. “In order to do that, my goal would be to maintain a wide variety and a very balanced tap selection. With 13 draft beers there’s always going to be a type of beer for any beer drinker from a light kolsch blonde, American light lager, all the way up to amber lagers, up to stouts.”

They also have a nitro tap line. Though the beer is brewed the same, during the carbonation process a blend of CO2 and nitrogen is added to the brew to give it a creamier consistency than most.

Besides a style of beer to appeal to every craft brew drinker and a nitro line, Drifa’s brewing system sets them apart from the rest, Ludwig added.

“I think the one thing that’s going to make us stand out is that we’re so small batch compared to the other breweries,” Ludwig said. “You are going to see a larger variety of unique styles and types of beer on draft compared to any other brewery in town. There’s no way that any of the other breweries can keep up with what we’re going to be able to do in a year. Brewing on a two-barrel system, we can fly through that recipe almost 10 times faster than most of them.”

At the end of brew day, the smaller brew system allows for just two barrels of beer or four half barrels. Less supply means selling out faster and the opportunity to put a brand-new beer on draft even faster.

In the brewery’s first few weeks of serving their Oktoberfest, a German lager yeast with a smooth finish, it was the first to sell out. The Nidstang, a similar lager, has been very popular with customers, but of course the IPAs have been the No. 1 sellers. Ludwig, who prefers IPAs herself, expects the three beers to remain on tap to be hop-balanced beers because of their popularity, but she assures Drifa’s rotating taps will have something for everyone.

“There’s something to be said about going to your favorite brewery and knowing that your favorite beer is there for you, so I would like to have really three core beers by this time next year and leaving the others rotating, but still maintaining that balance in the spectrum of styles,” she said.

Now that the brewery is open and the beer is flowing, Ludwig’s looking forward to the fun opportunities ahead. She’s working with local food truck owners such as Smelted, Manny Mag’s and DaH Pretzel Guys to have food offerings more regularly. The brewery offers chips, may soon offer pretzels and eventually might just have a make-your-own trail mix station.

Other goals of Ludwig’s include implementing beer 101 courses for the public to learn more about craft beer and brewing, getting involved with local homebrewers to feature their beers on Drifa’s taps, monthly yoga classes and possibly a beginners fly tying course.

She would also like the experiment more with ingredients used in the beers, such as smoking brewing grain at Thill’s Fish House and using it to brew a porter.

Drifa will also be hosting a Pints & Pumpkin Carving event from noon to 4 p.m. Oct. 27. The family friendly event costs $12 and will get you a pumpkin, a candle and a pint of beer or root beer on tap for kids. Carving tools will be provided.

The opportunities for craft beer and community involvement are endless, she said.

“We have wonderfully freshly crafted beer but we are Michigan’s first cooperatively owned brewery,” Ludwig said. “I’d like people to come check us out and learn a bit more about what we do, how we got here and how they can get involved.”

For more information on upcoming events or the brewery, check out Drifa Brewing Co. on Facebook.