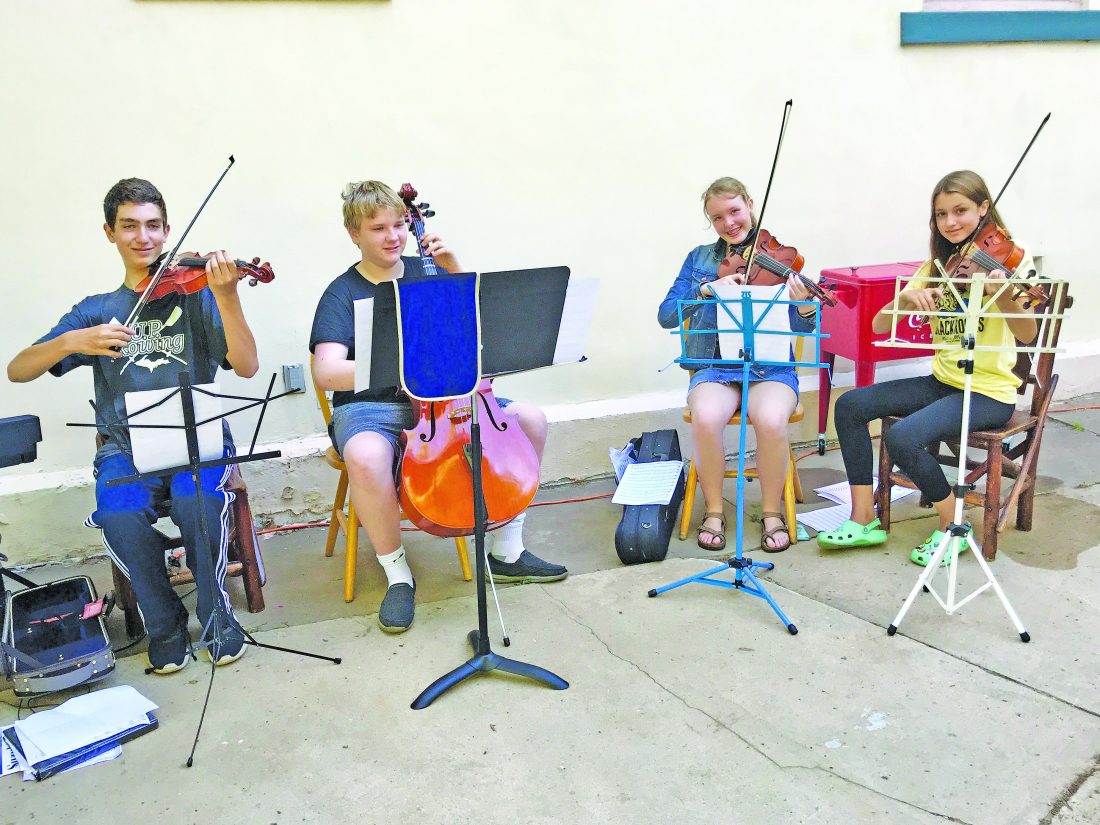 Students raise money for the orchestra program at Marquette Area Public Schools at a recent garage sale. From left are Charles Henry on the violin, Dillon Maki on the cello, Petra Frazier on the viola and Elena Henry, also on viola. (Photo courtesy of Heidi Henry)

MARQUETTE — Musical talent can overcome only so much. A fledgling cellist likely will have a better time learning the instrument if it’s not a broken-down, second-hand one.

Although they probably can’t afford a Stradivarius violin, several Marquette Area Public Schools orchestra students took it upon themselves to raise money for new instruments, sheet music and instrument repair for MAPS orchestras.

“Help keep music alive and well in Marquette!” read the sign for their June 29 garage sale at the Henry family home along East Hewitt Avenue in Marquette.

The garage sale was made more appealing — and maybe more successful — with students Charles and Elena Henry, Dillon Maki and Petra Frazier playing their string instruments for four hours during the event.

Collectively, they came up with the idea for the garage sale.

“We all came up with it because we wanted to do something to help the orchestra,” Elena Henry said. “They really don’t get that much money because we have a fundraiser once a year, and usually they get $1,000 to $2,000. They have to buy instruments.

“Every orchestra group needs sheet music, and you need to pay to get it not copyrighted or whatever, and it costs a lot of money, so a lot of it goes to that.”

The used instruments also aren’t always in the best shape.

“People are constantly breaking them,” she said. “They’re really old, and we just need better instruments.”

Dillon Maki’s mother, Kim, said her son is one of the students who don’t have their own instruments.

“He uses one of the school instruments, and they’re not the best,” she said.

“They’re still good,” he said. “You can still play them just fine.”

“When you’re starting out and you don’t have an instrument and you’re just learning it, you want an instrument that the repairs are done,” said the Henrys’ mother, Heidi. “It sounds nice. You’re going to decide whether or not you’re going to stay in orchestra or not.”

Through advertising the garage sale through signs, The Mining Journal and social media, the students managed to attract people to the event where items such as women’s clothes, bicycles and kids’ toys were sold.

Elena Henry expected a windfall of only $200 to maybe $500, just with donations.

For Eric Marta, the students’ MAPS music teacher, this probably was a pleasant surprise since for the most part he was unaware of the sale, Heidi Henry said.

In fact, Heidi Henry herself had no idea the event would be that successful.

“I was kind of shocked,” she said. “There were a lot of people.”

Another surprise was the concert that went on during the sale. After all, not many garage attendees are serenaded by a mini-strings/piano orchestra.

“No one hears classical music and piano and cello and a viola and a violin,” Heidi Henry said.

A donation jar helped to the cause, with one woman contributing $100, she said.

But again, it was about the music, which was the real reason behind the garage sale.

“They were people that came, and they just stayed,” Heidi Henry said. “They just sat down and watched.”

A bigger and better garage sale for the MAPS orchestra world could be on the horizon.

“It was such a success this year, we’re thinking of doing a bigger one so maybe more people could contribute,” Elena Henry said.

The students planned this garage sale about a month in advance, but she believes a future — and longer — sale could be even better with more planning.

“I think this is going to be the first annual,” Heidi Henry said. “I think it’s going to be much bigger next year.”

If students play their instruments next year, it might go more smoothly since their nerves probably will be worked out after already performing in public, even during a relatively informal event.

Heidi Henry said she noticed the young musicians’ nerves improving as the day wore on.

“I was having fun playing music,” Elena Henry said. “I think all of us were, and I think it helped us because we prepared our music as performance.”