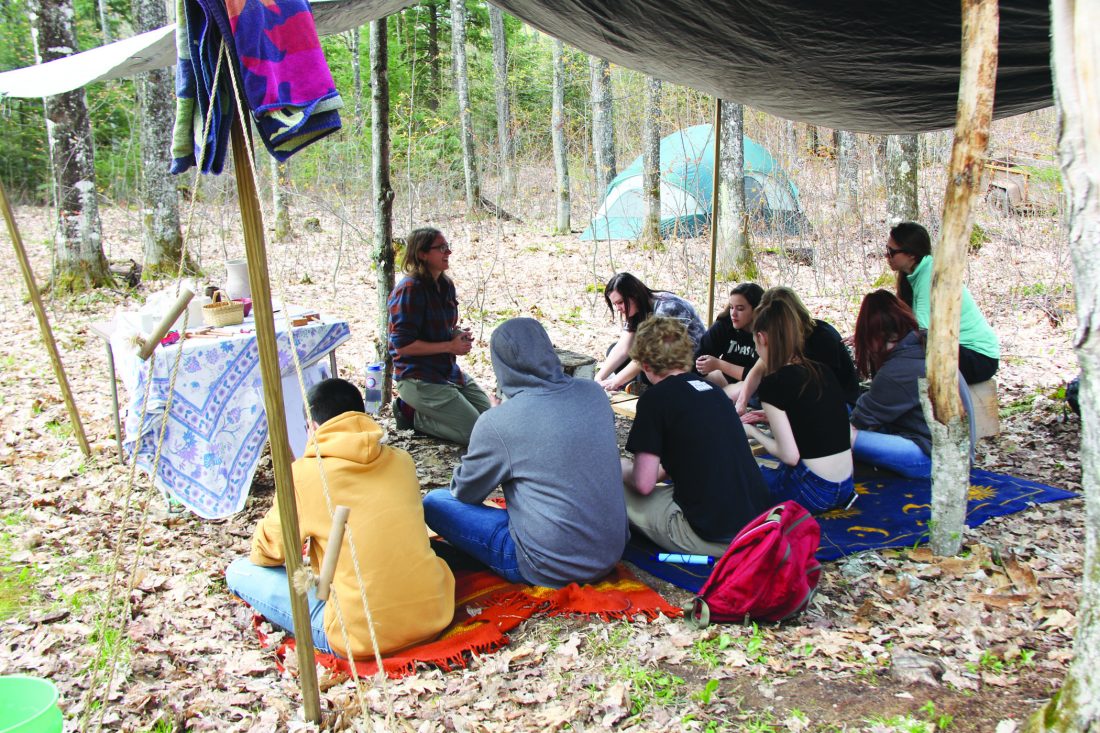 MARQUETTE — For three days, a small temporary colony of craftsmen and women was formed in a woodland setting near the Yellow Dog River for the Traditional Arts Gathering.

The gathering was funded by a grant from the Michigan Council for Arts and Cultural Affairs and organized by the Yellow Dog Watershed Preserve.

The first two days of the event, Thursday and Friday, were reserved for students from Marquette Alternative High School and Powell Township School, with Saturday open to the public. On Thursday, students from MAHS were the event’s first attendees.

“I think it was cool to see an old way of living,” MAHS junior Kaden Rogers said. “To be able to take a break from how busy the world can be and kind of go back to a time when people would have one task, and they would accomplish that task, and then they’d live each day at a time not thinking 10, 20 years ahead.”

“The only way we can live in the U.P. is with fire,” Jones said. “It is just a basic skill that connects us as humans to the rest of the world.”

Jones, who learned about primitive fire starting while attending Northern Michigan University, showed students how to create fire with a friction generating tool called a bow-drill, made with natural materials.

“They were very excited to see it happen before their eyes,” Jones said. “To understand that the lighter is not the only way — or matches — you can actually just produce your fire with things that are around you.”

Jones engaged students by talking about the importance of fire in the development of our species and also opened the discussion up to hear about the students’ experiences generating fire.

Rogers will apply lessons he learned from Jones’s demonstrations toward a short film about survival he is planning to produce this summer.

“The biggest struggle I had was coming up with was, ‘How are these people going to start a fire?’ Because they’re very limited in the story,” Rogers said. “And actually in talking with that the group and seeing all the ways you could start a fire, it got me thinking about all the different ways the story could move forward.”

MAHS senior Seth Moore enjoyed Gordon Gearhart’s blacksmithing presentation for the way it fit into lessons he had been learning at school about local history.

“Most of the iron ore in the U.S. for a long time came out of the U.P. and it’s good we got to learn about our local history like that,” Moore said.

This field trip was the second time that MAHS students were able to attend demonstrations at the YDWP Nature School. Many had the opportunity to build on the information they received from the previous year.

MAHS senior MacKenzah Smith attended a birch bark canoe building presentation given by YDWP program administrator Rochelle Dale and Zender at the Marquette Regional History Center last week, and she was able to take what she learned from that experience and be more involved in the process on Thursday.

“I was drawn to canoe building, splitting the wood and doing everything that has to be done to make the canoe,” Smith said.

Zender feels encouraged as a teacher and presenter to see attendees develop interest with traditional building skills. He was even able to allow students with prior knowledge of canoe building take the lead during certain parts of his demonstration.

“To have students who have a bit of familiarity with you is really cool, because you’re trying to engage with individuals in this group setting,” Zender said.