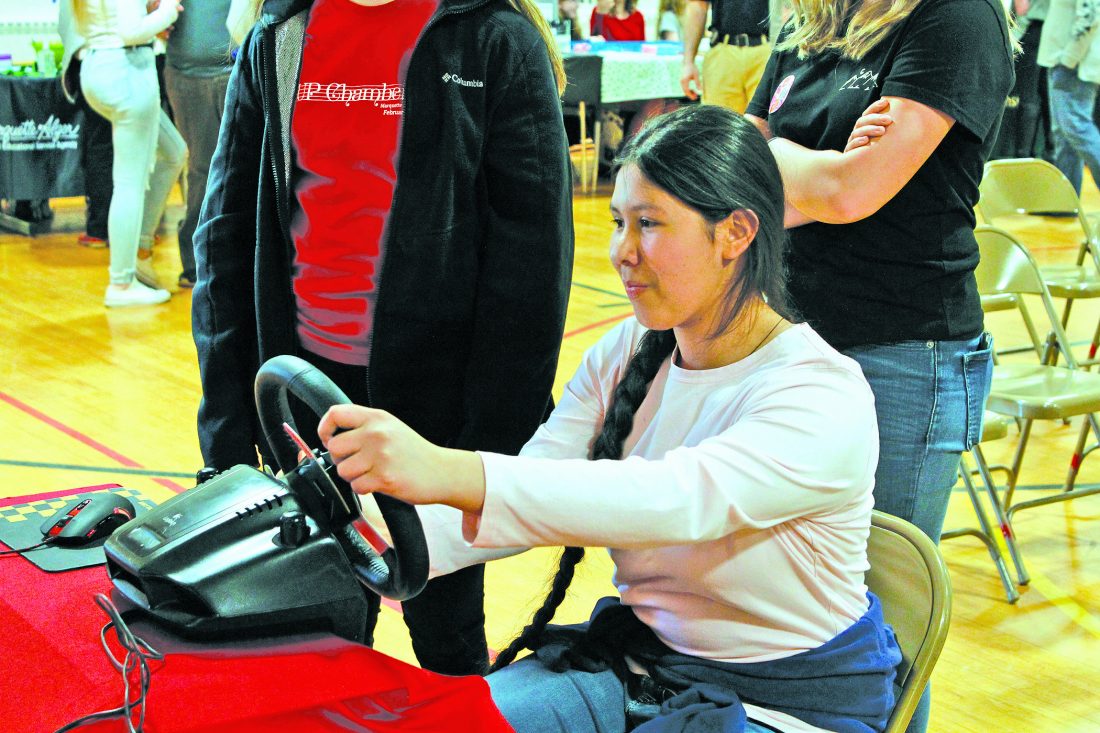 Magdalena Cardoso tries out a drive simulator provided by the Michigan State Police at TuesdayÕs Prevention Fair, hosted by Marquette County Cares. The simulator gave attendees the opportunity to see what distracted and impaired driving feels like and the dangers of it. (Journal photo by Trinity Carey)

MARQUETTE — Sixty-eight students from Marquette County stood up against substance use and abuse by creating public service announcement videos that highlighted why our choices matter.

Winners of the PSA contest were awarded cash prizes and certificates at Tuesday evening’s Prevention Fair, which was the final event for the Value of Prevention series hosted by Marquette County Cares, a community-based coalition that seeks to improve the lives of youth in the county through education and empowerment. The fair took place at the Marquette Alternative High School.

Before the awards ceremony, community members and youth perused booths from local organizations to learn positive ways to cope with stress, anxiety and depression, and learn about healthy lifestyle choices.

“The biggest message is obviously education,” said Jennifer Eyler, health educator for the Marquette County Health Department and coordinator for Marquette County Cares. “We want them to know these are the risks; these are some of the things that may happen due to drug use or substance abuse and to make a good informed decision.”

Among the many booths at the fair were a virtual driving experience from the Michigan State Police, which simulated distracted and drunken driving; a blender bike and healthy snack recipes from Marquette-Alger Regional Educational Service Agency nutrition educators; art with Joy Bender Hadley; Peaceshine, which taught tools to cope with stress, such as breathing techniques and painting rocks; suicide prevention strategies and gun locks from the Marquette County Health Department; education on the dangers of electronic cigarettes from Marquette County Cares; and fidget device making with Marquette County 4-H.

As attendees stopped by booths and completed de-stressing activities, they received stamps on their event passports, which entered them into a drawing for Dairy Queen Dilly Bars, gift cards to Rice Paddy and Snyder’s Drug Store, tune-ups from Lakeshore Bike and other prizes.

The Value of Prevention Series kicked off with a viewing of the documentary “Written Off,” a film based on an opioid addict in Wisconsin.

The second event in the series was Hidden In Plain Sight. Local police set up a mock bedroom and planted various drug paraphernalia throughout the room. Community members or concerned adults could then see where potential drug hiding places could be and learn what signs to watch for in children that could be related to substance use, explained Eyler.

Educational events such as these and knowing the resources available throughout the community are crucial to prevention, Eyler said.

“I definitely think it gives people the opportunity to realize that this is a concern,” Eyler said. “Even though we are in a rural area this is still a major concern, especially opioid addiction. It’s a really big concern in our community, and it’s really important to bring that to light and educate people about different services that are available for people who do have addictions and to educate the youth to, hopefully, prevent them from ever becoming addicted.”

“Choose” was the theme of the third annual PSA video contest. Middle school and high school students from the county could submit a video that focused on a prevention topic.

Gwinn High School students took all three places in the high school division with first place and $500 awarded to Chelsea Lebert, second place and $300 awarded to Mia Mitchell & Kaitlyn and third place to Ben Maki and Jacob Wainio who received $100.

Eyler hopes the Prevention Fair and its related events help students realize the risks that come with substance abuse and teaches them to stick to their values and not give in to peer pressure, she said.

“It’s really important because obviously they’re the future and a lot of times when people have been involved in drugs and don’t know the consequences or aren’t educated about the pros and cons of using different drugs, it’s after the fact that they’re really wishing that they would have known that knowledge,” Eyler said. “So we’re trying to create some preventative barriers and make sure that they’re having protective variables to keep them from choosing to use drugs.”