Educator and author speaks to young adults on sensitive subject 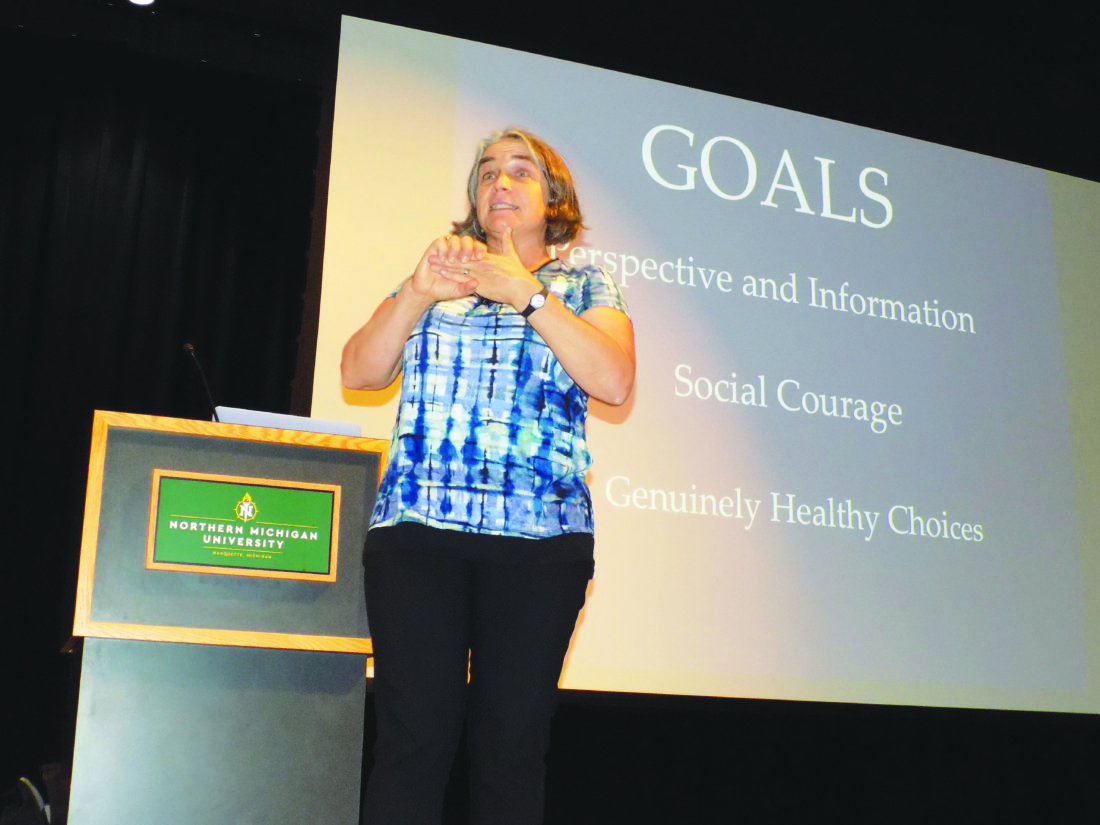 Educator, author and storyteller Cindy Pierce talks to students Tuesday at Northern Michigan UniversityÕs Jamrich Hall about todayÕs Òhookup cultureÓ and how to deal with it in an effective and healthy way. The event was sponsored by the Dean of Students Office at NMU. (Journal photo by Christie Bleck)

MARQUETTE — Incoming freshmen — and even upperclassmen with a few years of college already completed — have to deal with a lot during school.

Grades, part- or full-time jobs and extracurricular activities take a lot of time and effort.

Then there’s the “having fun” part of university life, and that’s where navigating the ever-complicated “hookup culture” comes into play.

Pierce’s talk was animated and engaging, but it might have been difficult to address such a topic in an overly serious tone, especially to an audience that likely included students in their upper teens.

Talking about the subject with a football team in a fraternity basement 14 years ago shocked her.

“The lack of knowledge about sex among people who were having lots of it was pretty unsettling,” Pierce said.

However, she pointed out that since she looked like their mother, they were comfortable asking questions.

Her goals Tuesday were to give students a perspective and information about relationships, sex, consent and related issues.

That, Pierce stressed, means speaking out against sexist, racist, homophobic and transphobic remarks.

This concept probably seems noble to many people, but in reality, it could be difficult.

“The thing about social courage is that a lot of people think, ‘Oh, eventually that’s just going to land on me. That will just become a feature in my life,’ and they go through their life waiting to feel that courage, but actually, that’s not how it works,” Pierce said. “It works when you practice it.”

Another practice she advocates is “elevating others” and choosing to be positive, particularly via text.

“Look through your text and see how you interact with people,” Pierce told the audience. “It’s amazing how we just jab.”

What got Pierce into her work was all the “below average sex” going on among college students, and if students were finding satisfying sex, her Tuesday talk wouldn’t be necessary.

But there she was, talking at the podium.

Part of the problem is that after listening to “all the banter, all the talk,” it seems that some students believe the vast majority of their peers are sexually active, she said.

That’s not necessarily the case.

“A third of college students are not even participating — not interested for whatever reason,” said Pierce, who as a sexuality educator was incredulous that 48 percent are indifferent to sex.

Perception, then, can drive choices.

“I think people should take their time and choose their partner very carefully,” Pierce said. “I think less sex is better.”

People who are having great sex, she said, have a connection with each other, communicate, respect each other, have a balance of interests and are willing to make themselves vulnerable.

Using condoms and getting tested for disease, of course, are important as well, she said.

She defined that term as both partners in a sexual encounter clearly and freely agreeing to be participants, and that means not being coercive; not taking advantage of someone who is incapacitated due to the influence of drugs, alcohol, or a physical or mental disability; and understanding that silence is not consent.

“Whoever is going to the next level, regardless of gender, regardless of sexual orientation, that person is obligated to ask for consent,” Pierce said.

In some sexual situations, social courage also is required, she said.

Pierce noted the people committing sexual assault are often repeat offenders — people who have been testing boundaries since middle school, she said.

“No one holds them accountable,” Pierce said. “This is where we need social courage, speaking up to people who are making jokes, touching people, testing boundaries with words, cackling.”

And it’s not just a woman’s problem.

“I loved it,” Miller said. “I think it’s great to continue the conversation around sex, especially around college campuses.”

To help stop sexual assault, Pierce suggested audience members join the organization “It’s On Us,” which is starting up on the NMU campus. The local group, she said, is setting up a table at Jamrich Hall during a “Week of Action” from Sept. 30-Oct. 4.

“It’s on us to create a campus free of sexual violence,” NMU President Fritz Erickson said in a short video on the movement, which included remarks from both men and women.