MARQUETTE – An anti-bullying message can apply to anyone regardless of age. But when it’s being presented to middle schoolers, a little fun is in order.

Tom Coverly, a comedy magician and motivational speaker from Grand Rapids, performed illusional tricks as a metaphor for “destroying illusions” that lead to bullying during a Sept. 11 presentation, “Destroy Illusions,” at Bothwell Middle School.

It’s a problem that continues to escalate because of the prevalence of social media, he said before the assembly.

“It’s not getting any better,” Coverly said. “It’s one of those things we could escape the bully in the evening. Now we can’t.”

After all, social media is available 24/7.

“The bully’s bullying those kids even when they get home,” Coverly said.

He performed several illusions for the audience to show how easily they can be deceived.

Coverly performed the tricks with humor, but he acknowledged that’s not his main passion.

“Everything that you see that I do on stage is an illusion, which means that it’s not real,” Coverly told the middle schoolers.

However, he tied in that concept to bullying “illusions,” such as girls thinking they have to look like models on magazine covers and believing this lie: “That because you don’t look like the cover of a magazine, you don’t look pretty enough. You don’t feel beautiful enough, because society has told us this is what beauty is. Society has told us this is what perfection is.”

The truth is, he said, is no one looks like a cover girl – even the cover girl herself.

“Young ladies, you’re beautiful and you’re perfect the way you are,” Coverly said.

Eating disorders, cutting and “giving up on life” are the result of girls believing the lies – and illusions – of the manufactured magazine covers, he said.

Coverly had a message for the boys in the audience as well.

“Many of you guys in this room have believed the illusion and the lie that it is OK to disrespect girls,” Coverly said.

That also doesn’t sit well with him.

“Real men – and you can be a real man in sixth, seventh and eighth grade – a real man knows how to treat women with respect,” Coverly said.

That respect even applies to video games, which could show a man hitting a woman, he said.

“If you would never do it in real life, then you have no business doing it on a video game,” Coverly said. “Do you hear me?”

That could lead to dire consequences in a boy’s later years.

“Not one man have I ever met, sitting in juvie or in jail or in prison, has ever said to me, ‘Tom, I knew from a young age that I would be the kind of man to lay my hands on a woman.'” Coverly said. “I never man yet that has said, ‘I knew that was going to be me.'”

Parents deserve respect too, he said, and related a story about how a teen got into an argument with his mother, telling her he hated her.

The mother then left the house on an errand, and on her way home was killed in an automobile accident.

“He’s a grown man today,” Coverly said, “and that still bothers him to this day, it eats him alive, that that was the last words out of his mouth.”

Making a difference could be as simple as having a positive attitude or not allowing someone to sit alone.

“Negative is really contagious,” Coverly said, “but so is being positive, and I’d would love that for this school. I would love to see that change in this school. There is no excuse for someone sitting at a table by themselves at lunchtime, no excuse.”

After listening to the presentation, sixth-grader Izabelle Pearce Korpi said she would look at people differently.

“I think it was really good,” she said. “It kind of changed my life.”

LaJoie said the SHF, after seeing Coverly’s work and “powerful” messaging after being hired as the group’s annual gala entertainment for this year, believed it would be beneficial to arrange for presentations to middle schools while he was in town.

The idea, he said, was to have Coverly perform on the west end of the county, specifically Aspen Ridge Middle School in Ishpeming, and at Bothwell in Marquette.

“His positive message to youth was extremely inspiring and fit well within the mission of both of our health-centered organizations,” LaJoie said. “We couldn’t be happier with the results.”

The joy of skiing 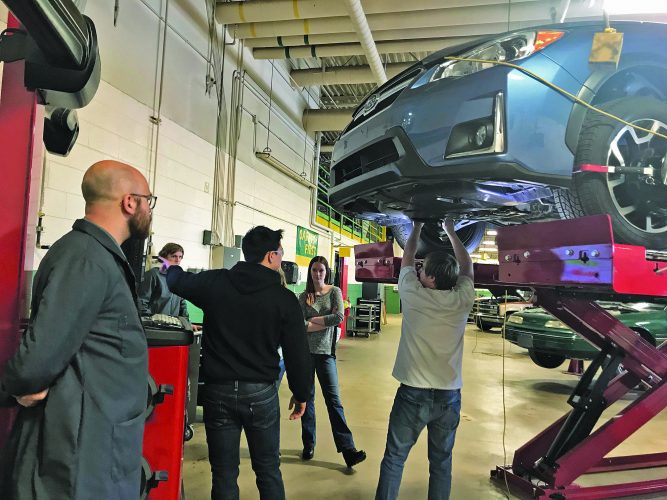