After 45 years, dreams do come true 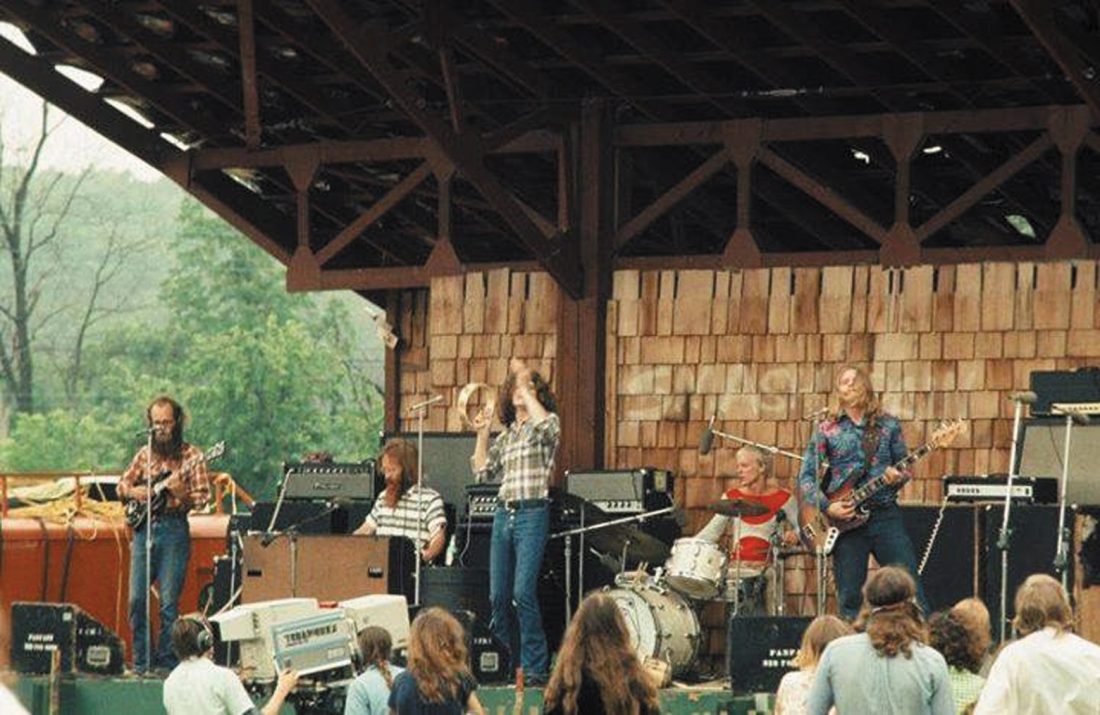 From left, the members of Walrus: Mike McKelvy on guitar, Jim Bowers on keys, Bill Etten with a tambourine, Don Kuhli on drums and Randy Tessier on the bass guitar perform in front of a lively crowd at one of their outdoor shows in 1973 in Ann Arbor. Walrus played locally and downstate in the early 1960s and 1970s until the group disbanded in 1974. (Photo courtesy of Walrus)

From left, the members of Walrus: Mike McKelvy on guitar, Jim Bowers on keys, Bill Etten with a tambourine, Don Kuhli on drums and Randy Tessier on the bass guitar perform in front of a lively crowd at one of their outdoor shows in 1973 in Ann Arbor. Walrus played locally and downstate in the early 1960s and 1970s until the group disbanded in 1974. (Photo courtesy of Walrus)

Walrus members Mike McKelvy (left), Randy Tessier and Bill Etten perform at a former local venue in Marquette. This is one of the album covers released on Amazon and Itunes. (Photo courtesy of Walrus)

MARQUETTE — The late 60s and early 70s birthed a wide range of musical experimentation from The Beatles “White Album” to Queen’s distinctive hit “Bohemian Rhapsody.” Tides of eccentric compositions began to take over the radio waves, and changed the face of the music industry. For some, it immediately led to fame and fortune. For others, it kept the wishes and hopes for the pot of gold at the end of the rainbow alive.

For originated Marquette rock band Walrus, it only took 45 years until their rainbow dreams became a living reality.

The five member band, formed in 1969, finalized a record deal late last year, an album to which had been long forgotten until musical scout Mark Pulaski, who works with Fervor Records in Phoenix, discovered the band while researching U.P. rock music history in 2018. Pulaski, a 1982 NMU graduate, found some articles on Walrus and this interest sent him down a rabbit hole to uncovering more about this long-lost group of musicians. After listening to a copy of a Walrus CD Pulaski had received from band member Mike McKelvy, he sent it over to Fervor Records who then offered to buy the rights to the album.

“I was really impressed with the quality of songwriting and quality of the record,” Pulaski said. “It wasn’t just three chords and bland lyrics; it was interesting. I knew right after listening to it that Fervor would want it.”

To lead guitarist and vocalist McKelvy, the news came as quite a surprise. 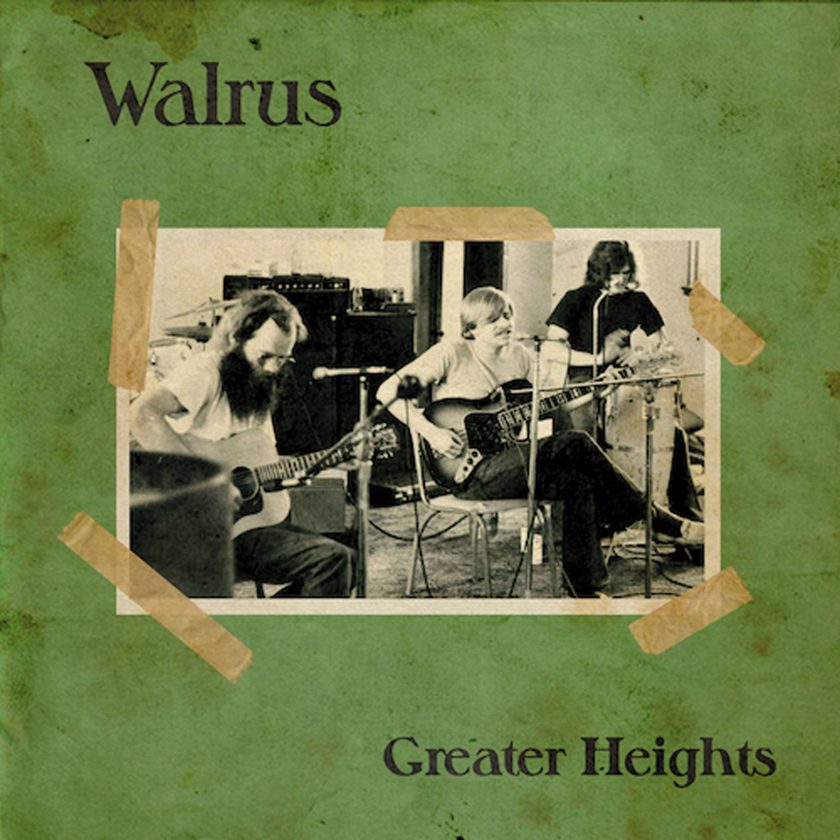 Walrus members Mike McKelvy (left), Randy Tessier and Bill Etten perform at a former local venue in Marquette. This is one of the album covers released on Amazon and Itunes. (Photo courtesy of Walrus)

“We had nothing to lose; nobody was pursuing anything. It ended up on the shelf in the dust in the closet, so we’re really happy about all of this,” he said. “We’re kind of amazed actually that this went through. It took a year and we thought sure they were going to dump us because it took so long to do it… but they heard something on this album that they really liked.”

The entire deal took almost a year to finalize because songs had to be copyrighted and Fervor Records remastered it so the quality would be in pristine shape, McKelvy said. The album features 14 songs that vary in styles from rock, pop, acoustic to jazz which is far from what the band is accustomed to sounding like to local listeners, McKelvy noted.

“We were experimenting because we never had much experience in a studio. So we were like, ‘Here we go. It’s like a kid in a candy store,'” McKelvy said. “This album is not representative of what we sounded like live… You go from one extreme to another on this thing, vast extremes of styles and musical stuff. It’s very eclectic but that’s what the record company liked because it gave them a smorgasbord of stuff to choose from.”

Back in ’69, the band began with Bill Etten, Kim French, Don Kuhli and McKelvy. In 1970, Randy Tessier was added to the lineup and during the first couple of years, the band wrote their original songs and took up a fan base in Marquette, McKelvy said.

Then in 1972, the band moved down to Ann Arbor and recorded a 45 rpm record titled “Delighted/Rape and Plunder.” However, Walrus’ cohesive energy began to wither away, as most bands do, due to differentiating interests and the itch to do more independent projects, McKelvy continued. The band had already broken up during that time, but then-keyboardist Jim Bowers got the band together in the studio one last time in 1973 where they recorded a reel-to-reel tape of 15 original songs which took until 1974 to complete. Shortly then after, the group disbanded and that tape eventually was lost.

Fortunately, McKelvy had another copy and when the band reunited in 2013 at Harbor Fest in Marquette, he decided to make a CD out of the tape for friends and fans. But McKelvy had no idea this CD would attract the attention of Fervor Records — an established company based in Arizona with a large catalog of vintage music which they specialize in licensing for films, TV shows and commercials. The company has licensed music to shows such as “Young Sheldon,” “Ray Donovan,” “This Is Us” and “Shameless.”

The album is split into three different sections on iTunes and Amazon — Indian Summer, Greater Heights and Rape & Plunder — or people can purchase each song individually; or it can also be listened to via Spotify or YouTube.

After discovering Walrus, Pulaski noted that he felt obligated to get Fervord Records to sign them because their music had great musicianship and that’s rare to come by. Listening to a mountain of music on a daily basis for his job, Pulaski said there are several bands and musicians whose music is “fine” but not “great.” But Walrus had a nostalgia value that brought back those feelings of living in the 60s and 70s and it’s a “forgotten sound,” Pulaski said.

“It also gives them recognition that what they were doing is valuable and interesting,” Pulaski said.

Currently, the band members are dispersed around the country in Michigan, Florida and California. The band also has a public Facebook group page titled “Walrus” with over 190 members. Though the band no longer plays together, this record deal is a special gift to give back to the fans who supported them throughout the decades, McKelvy added.

“I just hope they enjoy the music and realize that the band was more than a rock band,” he said. “We’re known locally as a hard rock band, (but) the album shows our variety of our interests.”