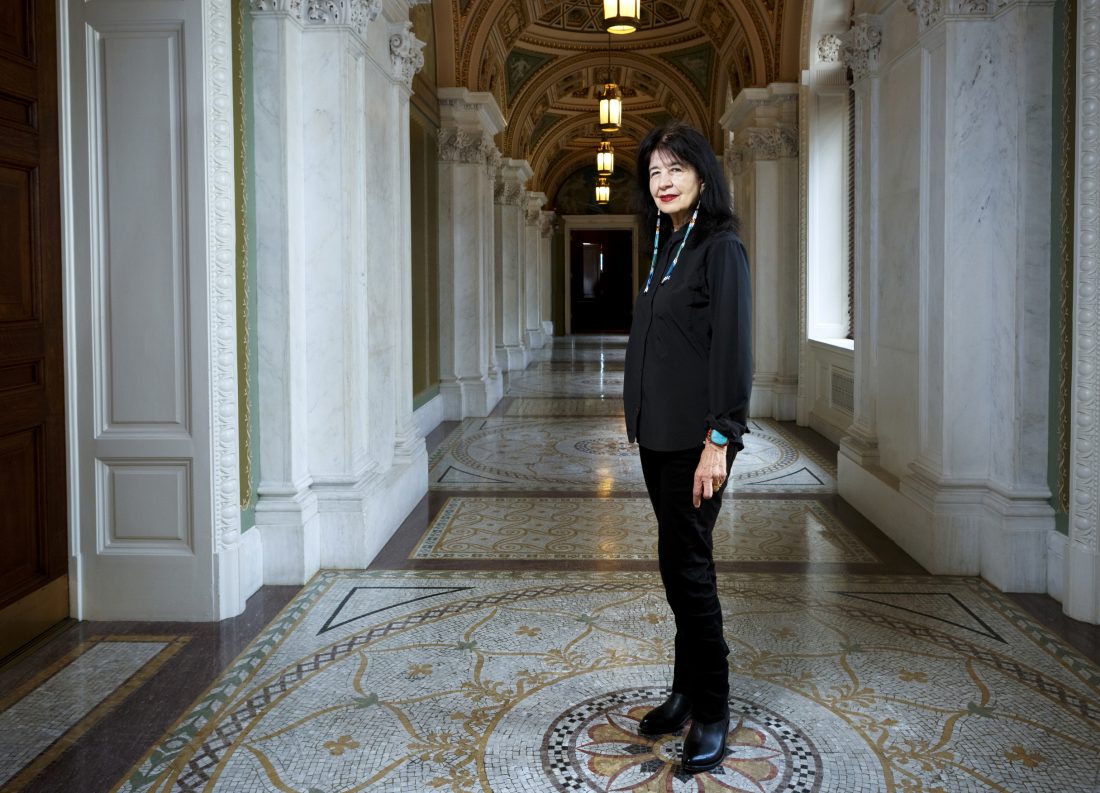 In this June 6, 2019 photo, Joy Harjo, of the United States, poses inside the Library of Congress, in Washington. Harjo has been named the country’s next poet laureate, becoming the first Native American to hold that position. Librarian of Congress Carla Hayden announced Harjo’s appointment, saying in a statement Wednesday, June 19 that the poet helped tell an American story of continuity and disruption, “reckoning and myth-making.” Harjo’s one-year term begins this fall. She succeeds Tracy K. Smith, who served two terms. (Shawn Miller/Library of Congress)

NEW YORK — Joy Harjo, the first Native American to be named U.S. poet laureate, has been ready for a long time.

“I’ve been an unofficial poetry ambassador — on the road for poetry for years,” the 68-year-old Harjo wrote in a recent email to The Associated Press. “I’ve often been the only poet or Native poet-person that many have seen/met/heard. I’ve introduced many poetry audiences to Native poetry and audiences not expecting poetry to be poetry.”

Her appointment was announced Wednesday by Librarian of Congress Carla Hayden, who said in a statement that Harjo helped tell an “American story” of traditions both lost and maintained, of “reckoning and myth-making.” Harjo’s term is for one year and she succeeds Tracy K. Smith, who served two terms. The position is officially called “Poet Laureate Consultant in Poetry,” with a $35,000 stipend. Harjo will have few specific responsibilities, but other laureates have launched initiatives, most recently Smith’s tour of rural communities around the country.

“I don’t have a defined project right now, but I want to bring the contribution of poetry of the tribal nations to the forefront and include it in the discussion of poetry,” says Harjo, an enrolled member of the Muscogee Creek Nation and a native of Tulsa, Oklahoma. “This country is in need of deep healing. We’re in a transformational moment in national history and earth history, so whichever way we move is going to absolutely define us.”

She is known for such collections as “The Woman Who Fell From the Sky” and “In Mad Love and War” and for a forceful, intimate style that draws upon the natural and spiritual world. Her previous honors include the PEN Open Book Award and the Wallace Stevens Award for lifetime achievement. Earlier this year, she was awarded the Jackson Prize, given by Poets & Writers, for a poet of merit who deserves more attention.

Harjo is currently editing an anthology of Native poets, and a new book of her own poems, “An American Sunrise,” comes out in August (her publisher, W.W. Norton, moved it up from its planned September release). She also has a background in painting and dance, and is an impassioned saxophone player who has recorded several albums. In a 2017 blog post that is also part of her poem “Rabbit Invents the Saxophone,” she called the instrument “so human,” writing that “Its tendency is to be rowdy, edgy, talk too loud, bump into people, say the wrong words at the wrong time.

“But then, you take a breath, all the way from the center of the earth and blow. All that heartache is forgiven.”

The poet laureate is not a political position. Harjo makes clear her disdain for many office seekers, however, in her poem “For Those Who Would Govern.” She also has expressed her views on President Trump. In 2016, she linked to a Newsweek article about then-candidate Trump’s overseas business connections and tweeted, “Donald Trump’s foreign ties may conflict with U.S. national security interests.” Last summer, she linked to a New York magazine article about Trump and Russia, and tweeted: “What If Trump Has Been a Russian Asset Since 1987?”

The head of the Library of Congress’ poetry and literature center, Robert Casper, told the AP that laureates are encouraged to focus on “poems and the way they work,” including politically. During her interview, Harjo declined to talk about Trump directly, and said instead that “everything is political.”

“I began writing poetry because I didn’t hear Native women’s voices in the discussions of policy, of how we were going to move forward in a way that is respectful and honors those basic human laws that are common to all people, like treating all life respectfully, honoring your ancestors, this earth,” she said.

She cites her poem “Rabbit is Up To Tricks” as an expression of political thought, but in a timeless way. Her poem tells of a trickster Rabbit who has become lonely, and so forms a man out of clay and teaches him to steal. The clay man learns too well, stealing animals, food and another man’s wife. He will move on to gold and land and control of the world.

And Rabbit had no place to play.

Rabbit tried to call the clay man back,

but when the clay man wouldn’t listen

Rabbit realized he’d made a clay man with no ears.