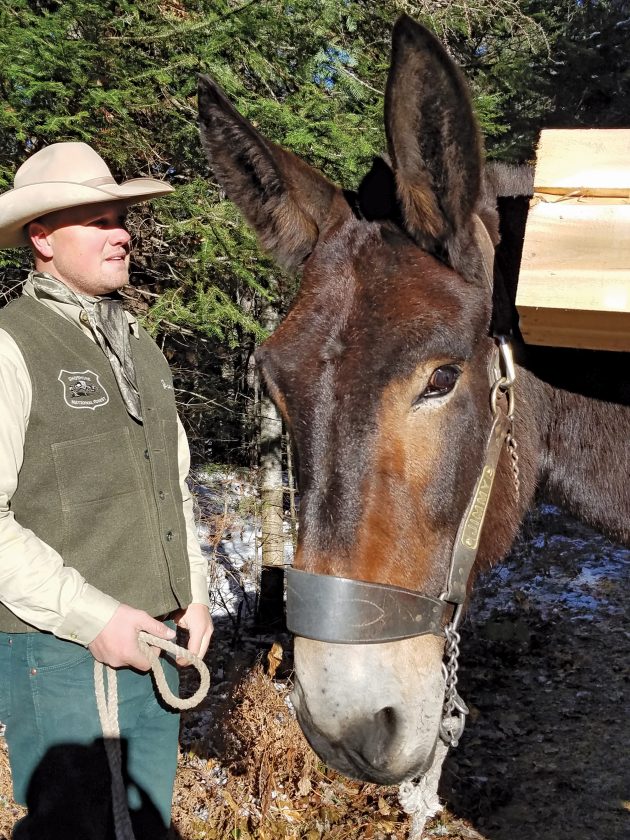 Jason Pindell, rangeland management specialist with the Shoshone National Forest, is shown with Jimmy the mule. (Photo courtesy of the Ottawa National Forest)

MARQUETTE — The site of a mule pack string carrying loads in a natural area might be better imagined in the western United States.

But it happens in the Upper Peninsula too.

In October 2018, about 480 feet of boardwalk was installed along the White Deer Lake Trail in the McCormick Wilderness Area, located in the Ottawa National Forest near Michigamme.

The ONF partnered with The Nature Conservancy to put in the step-and-run boardwalk to protect wilderness character yet provide access. 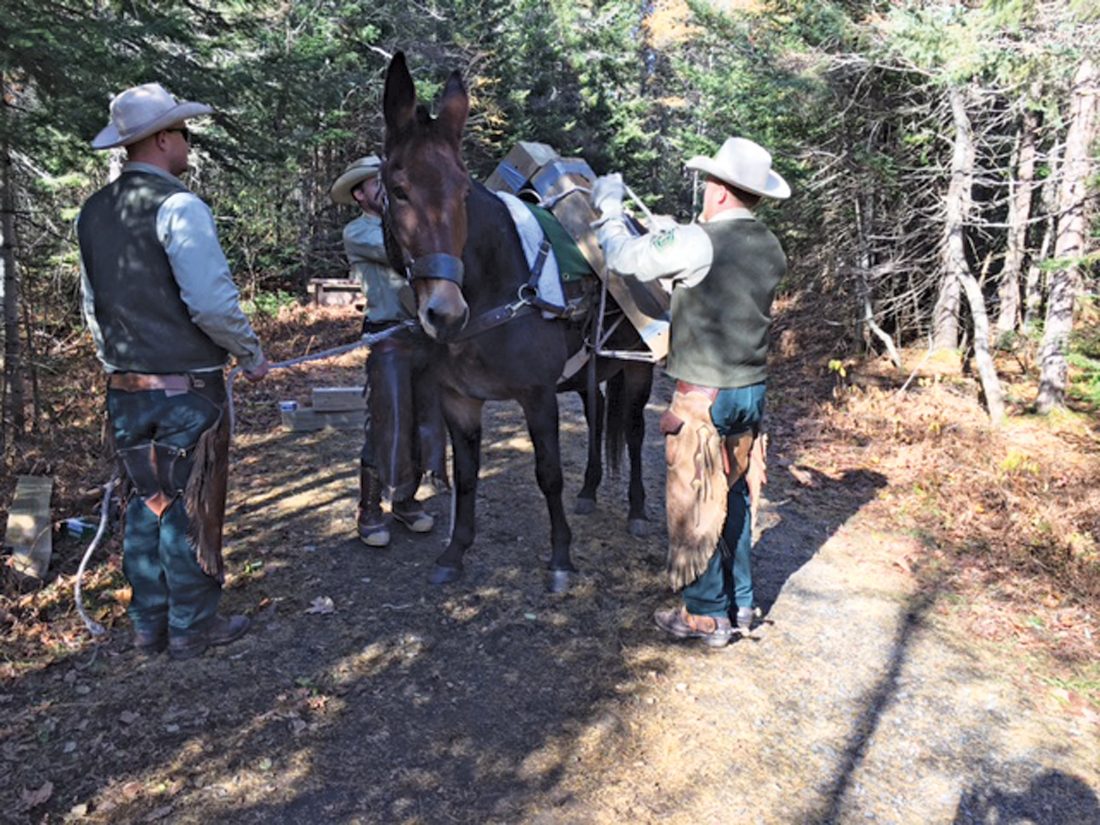 A key word here is “wilderness,” meaning the area is remote, and since wheels aren’t allowed in the McCormick Wilderness Area, a unique solution was found: using mules to haul in wood and other materials.

“It was a unique project,” Kovala said. “We worked with our main partners. I got to meet some folks and bring in some folks from out west to help us

and solve an issue that we didn’t know to solve — to actually restore or rehabilitate the White Deer Lake Trail.”

He worked on the logistics and planning, but credited TNC with helping to choose a trail design that would meet wilderness objectives yet enhance the user experience. It also paid for the mules to come to the area.

“The Nature Conservancy is very involved in the Michigamme Highlands,” said Emily Clegg, easement manager for TNC in Michigan, in a video shown at the meeting.

Beavers causing severe flooding by of the trail necessitated the boardwalk.

“They’re just being industrious, as beavers do — building dams and backing up water,” Kovala said.

However, the water altered the site.

“At one point in time, it seemed like it was waist deep,” Kovala said.

Another complicating factor, he said, was a rare plant, needle-leaved gentian growing at the site, and people trampling the plant wasn’t an option.

Either was trapping beavers because of wilderness rules.

“That’s the idea of wilderness — leave it with as little human disturbance as possible,” Kovala said.

The Federal Wilderness Act of 1964 doesn’t allow management of beavers, nor does it allow anything with wheels, such as a bicycle or trailer. Power tools also can’t be used.

Try building a boardwalk with these obstacles.

Since the project was located well into wilderness, USFS staff looked at several alternatives: helicopters, sled-dog teams and human volunteers.

They eventually decided to bring in staff from the Shoshone National Forest in Wyoming along with 10 mules and four horses, which were tasked with transporting materials so TNC staff and volunteers could construct the boardwalk.

TNC coordinated the use of locally sourced cedar milled by Wilson Creek Woodsmithing in Big Bay.

Because of the rule against using power tools in the wilderness area, holes had to be predrilled, Kovala said.

While they were in the region, the animals and SNF staff stayed at Maple Ridge Resort along Lake Michigamme where amenities such as corrals and a big body of water could be found.

Kovala said the mules made three trips a day over a 3.5-day period, with each trip about 4 miles.

He didn’t know what to expect of the mules, but it turned out he had nothing to worry about.

“They were all really nice and well-behaved,” Kovala said. “It was really cool. There was no kicking or biting or anything like that.”

The McCormick mules even had names such as “Tubbs” and his favorite, the large-headed “Bruce.”

A pack string generally has two handlers, riding in the front and rear, with all the animals tied together with a breakaway rope in case in case an animal gets in trouble, he said.

“The biggest thing that we found was making sure the weight was distributed on each side,” he said.

Of course, there was the challenge of actually building the boardwalk.

What made it easier, though, was everything being labeled and numbered.

Although he wasn’t at the build, Kovala heard good things.

“It just went, put number 2 here, number 3 there, number 4 there, spike here and some anchors there,” Kovala said.

The builders did have to create curves in the boardwalk, and this required the use of handsaws — “old-school tools,” he said.

Rebar was used in on section, he said, plus some anchors had to be installed to make sure the sills didn’t shift over time.

“We do need something there to hold it there,” Kovala said. “It’s not going to stay because I asked it nicely to.”

The boardwalk project appears to be a success.

Kovala said that when he saw the boardwalk in the fall, it was in good shape.

“This is a great example of what collaborating with partners and other national forests can accomplish to protect natural resources and provide quality and sustainable recreational experiences on public land,” Simpson wrote.

Jason Pindell, rangeland management specialist with the Shoshone National Forest, is shown with Jimmy the mule. (Photo courtesy of the Ottawa National Forest)