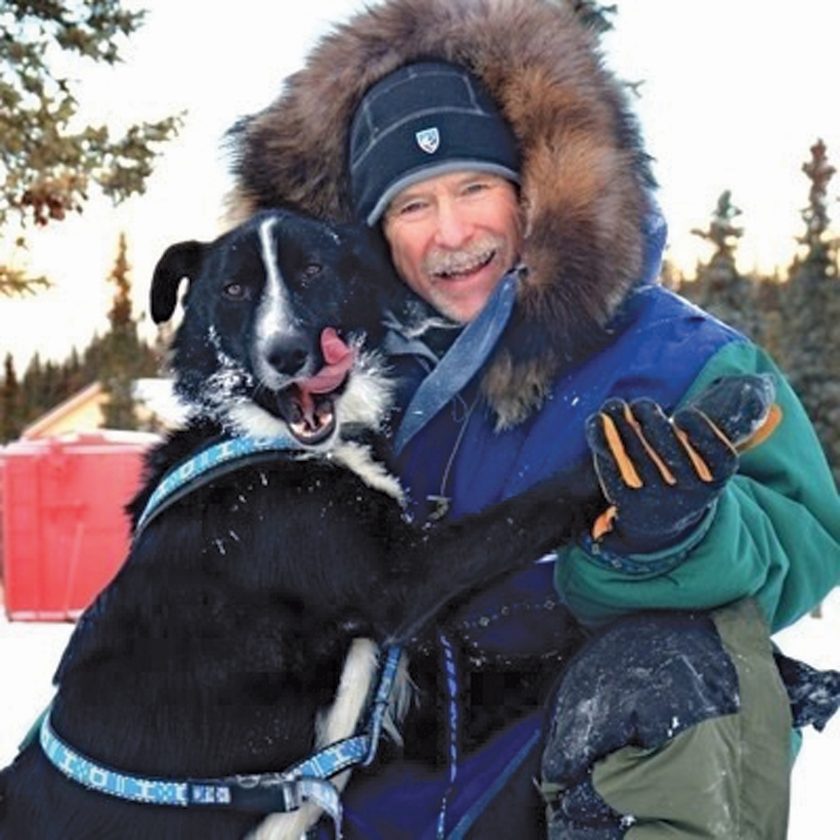 MARQUETTE — Jeff King’s Tuesday presentation at Northern Michigan University’s Jamrich Hall began with a video of him running his sled dogs on what appeared to be a very bumpy trail, with his sled overturning a few times along the way.

It’s a view of mushing most people don’t get to see, and it’s one that shows how challenging mushing really can be.

“That ought to get you warmed up, huh?” King asked the audience.

In addition to the Iditarod victories, King has earned 24 first-place titles, including the 1,000-mile Yukon International Sled Dog Race, also known as the Yukon Quest. King has twice received the prestigious Leonhard Seppala Humanitarian Award for exemplary care of his dog team.

King was inducted into the Iditarod Hall of Fame in 1999. His book, “Cold Hands, Warm Heart: Alaskan Adventures of an Iditarod Champion,” shares a lifetime of his adventure stories.

At NMU, King related some of his adventure tales.

He grew up just north of San Francisco a block away from a dog training facility for guide dogs for the blind.

His family later moved to the hills in Sonoma County where the late author Jack London lived.

In 1975, however, he was sitting in a girl’s college dorm room when her roommate came in and talked about how excited she was about having a chance to interview for a job in Alaska.

King wanted to know more about how to get to that remote state and be employed there.

“It turned out at that time you didn’t need a lot of talent to get a job cleaning toilets in Alaska in 1975, and I got hired immediately,” King said.

He’s pretty much been in Alaska ever since, but he’s moved beyond working the concessions at Denali National Park.

King eventually acquired a small team of stray dogs and took up residence in a tent.

“When I got in from this trip in the winter in the tent, I literally walked right into the post office to get my mail, and there was a little flyer that said, ‘sled dog race,'” King said, and “I thought, ‘Wow, another sled dog race. This one’s right in our community. I should do that.'”

He got the idea to learn how to use a whip in preparation for the 18-mile race, which took place in 1978.

As the race began, though, King had to reassure his neophyte dogs that things were going to be OK, with them never having been near that many other dogs.

There was another issue too.

“Little did I know that this race sled was like no sled at all and I might as well have been on a pair of skis,” King said.

Going so fast, he didn’t feel the need to touch the whip, and as the race progressed, his confidence level soared.

So, King tried the whip as he got on a lake, where an old office chair was set up with a sign that indicated there were 2 miles left to the finish line.

He performed his best Indiana Jones move, but unfortunately hooked the chair, which flew over his dog team and crashed.

“I was mortified and rolled the whip up and put it back in my sled,” King said. “I’ve never touched one since.”

He’s had a lot of success, though, at the famed Iditarod, but continues to race. In fact, he is signed up for his 30th Iditarod, which is scheduled to start March 7.

Undoubtedly, he hopes that race will not be like a past Yukon Quest in which he took part.

“My trademark desire to win the race had morphed into a very humble desire to make sure that this race ended without disappointment regardless of what place I was in,” King said.

At the halfway point on the Yukon River, two hours ahead of the next competitor, it was a moonless night and 40 degrees below zero, he said. Ominous fog appeared in different spots, indicating open water, but he was confident in the trail’s safety.

However, King eventually discovered the trail had become a “ribbon of open water” because of an overflow. King then saw his dog team treading water, and water washed into his suit. His sled also sank.

Drowning was a possibility.

Using dogs as life preservers, King “levitated” out of the water and saved his team.

Then freezing to death was a possibility.

So, King needed his sled, which contained fire-making materials and dry clothing items. Fortunately, his dogs helped him extract his sled from water. Their speed also led him down the trail where he could find fuel and shelter.

“If you want to find out if I lived, though, you have to buy my book,” King said.

Another unusual experience was when one of his dogs, known for a large appetite, ate a foot-long section of a sausage-resembling highway flare for a midnight snack during the International Rocky Mountain Stage Stop Sled Dog Race.

“Clearly she didn’t give much thought to what it tasted like,” King said.

Needless to say, he panicked, and eventually took his dog to a veterinarian where the dog was given slurry-activated charcoal, which the dog didn’t appreciate.

King’s idea, then, was to put it in a pan with kibble, which worked — with the help of his positive voice inflections.

“She vacuumed the bottom of that pan so fast,” King said. “Never came up long enough to even know what it tasted like. The vet was stunned.”

The dog had no ill effects.

“However, the next day during the race I saw a little flame shoot out her butt,” King joked.

King has been in hundreds of sled dog races all over the world and is approaching 200,000 miles “on the back of a dog sled.”

He has, however, a home base.

“Alaska continues to be, to dog mushing, what Nashville is to country music,” King said.

He keeps his dogs at his Husky Homestead in Denali Park, Alaska, which according to huskyhomestead.com, is involved in sustainable practices such as recycling, purchasing post-consumer waste products, using non-toxic cleaning products and composting dog poop.

It also uses energy-efficient practices wherever possible, such as LED lightbulbs, coordinating pick-ups to use the least amount of vehicles to limit its carbon footprint, and catching rainwater for the dogs’ use.

Mushing on trails, though, likely will continue to provide challenges.

Tuesday’s event was sponsored by Platform Personalities and the Student Activity Fee.