Monarch mania on the Stonington Peninsula 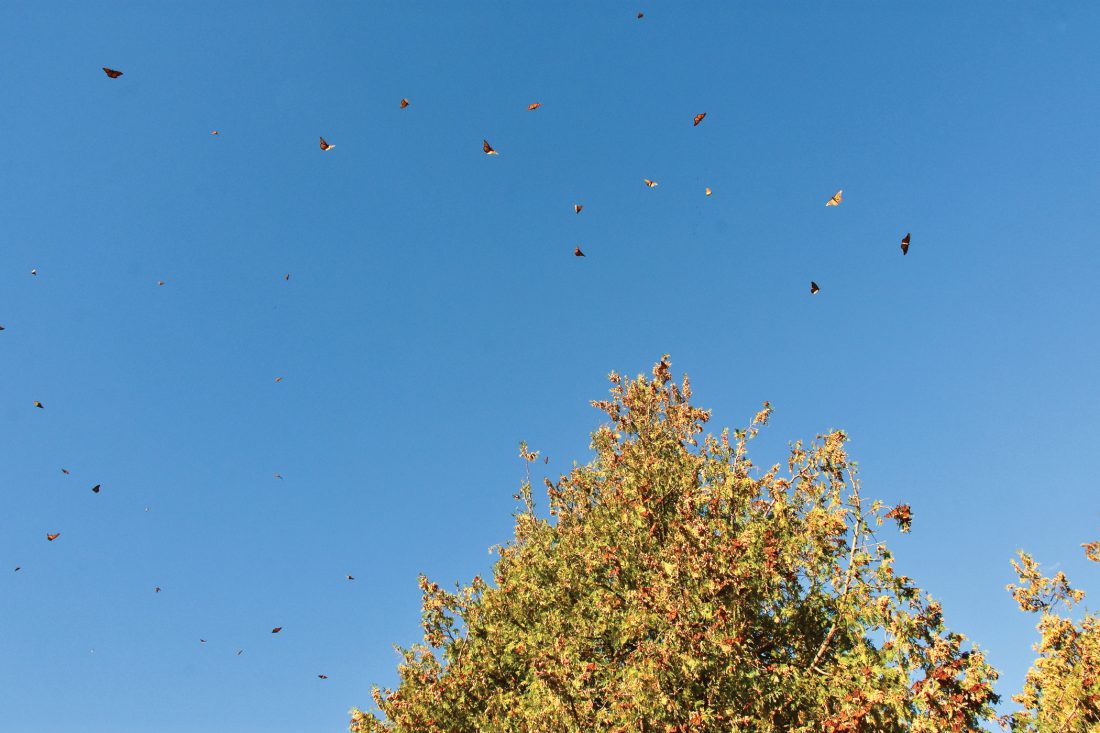 STONINGTON PENINSULA — It’s not the mountains of Mexico, but the sights were the same.

More than a thousand monarch butterflies were roosting in the trees at the tip of the Stonington Peninsula — Peninsula Point in Delta County. The tip juts out into Lake Michigan and is part of the Hiawatha National Forest. The point is well known by birders for the great flights of migrants seen at the tip in mid-May but is also known for the large numbers of monarch butterflies that gather there in August and September waiting for following north winds to carry them across the stretch of Lake Michigan between Michigan and Door County in Wisconsin.

This year, a group of 500 monarchs left the point on Aug. 31 and another 300 on Sept. 7. Several other groups of 100 or so had also jumped from the point to Wisconsin too. 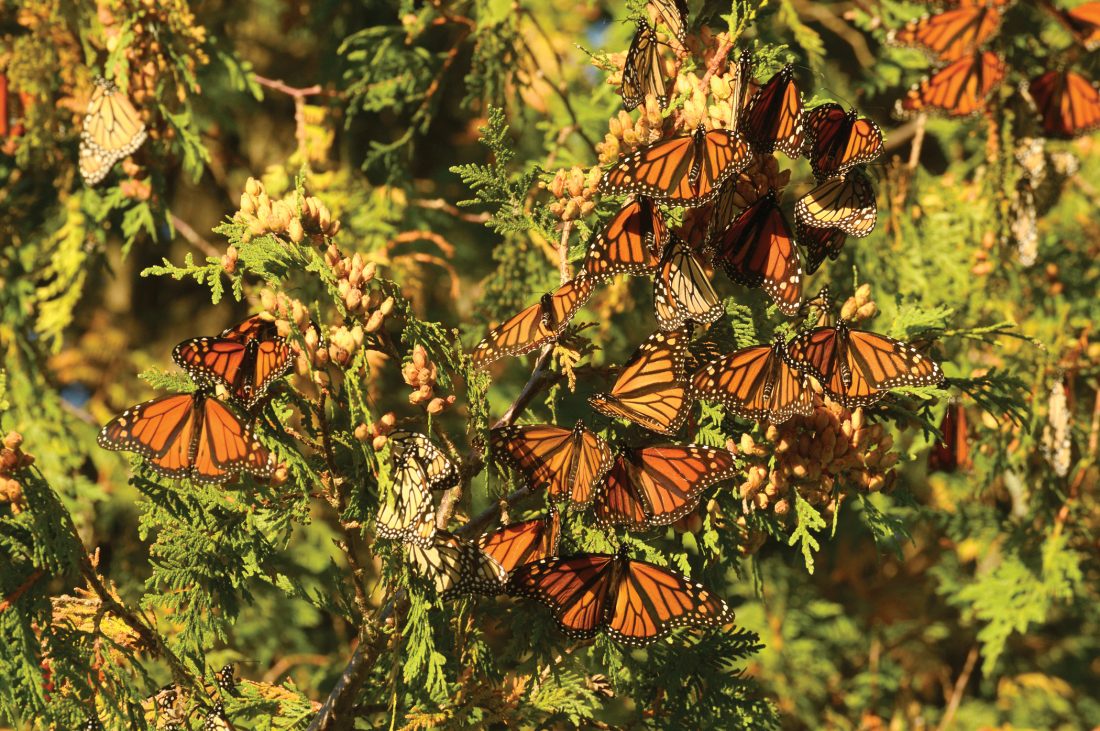 Peninsula Point is one of the few places in the United States to witness monarch migration in the fall. But after the rains ended in the Stonington on Sept. 20, many local residents noticed large numbers of monarchs flying toward the point, weeks after the last large groups have migrated through Delta County.

Opal Hoffmann, a Hiawatha National Forest volunteer who has watched the butterfly migration for years, headed to the point to see how many monarchs were beginning to stop there. She and others were surprised to see large numbers of monarchs gathering through the afternoon and evening.

The next morning the butterflies headed out into the sun to warm. Usually they only remain at the point one night, heading out in early September in a north wind. Several hundred left the point on Sept. 21 as a four-hour window opened for following winds to aid the butterflies until the breeze shifted, grounding the rest.

They remained at the point throughout the week as the north winds were basically absent and wet weather prevailed. The butterflies had remained close to the water’s edge, apparently feeding only on the purple spotted knapweed flowers and some goldenrods present near the roosting sites.

The remainder of the time the butterflies coasted in the wind around the point and roosted in the white spruce, white cedar and serviceberry trees, mostly between 15 and 25 feet up. During this time some butterflies were tagged by volunteers to help track their travels from the area.

One day in late September was particularly brutal for the butterflies as the temperatures dropped and the butterflies were buffeted by strong winds and heavy rains, dropping many to the ground. The weakened condition did allow a number of volunteers to place small paper tags on more butterflies. By reporting their relocations to a research group at the University of Kansas, they can be tracked to get some basic information about the migration routes they take to reach Mexico and find out how many might actually make it to their winter destination.

The volunteers had monitored the weather forecasts and saw the next window of warmer weather and favorable winds were to come on one Saturday, when they expected the butterflies would leave to continue their flight all the way to the highlands of Mexico over 2,000 miles away.

What makes the trip all the more amazing is these butterflies have never been there. Hatched from eggs in Michigan and sites farther north, they fly by instinct to their wintering grounds. They will head back north beginning early in 2020 into the southern United States to start new broods that will continue to work their way back to the north woods. It is a nearly unfathomable concert to consider all this is packed into such a tiny little brain.

Hoffmann said that with luck that sunny morning, “They will warm up on the sunny side of the trees (that morning) and fly off.” She and others had posted notes on social media about the opportunities to see the butterflies during the week, and their eminent departure on that Saturday morning.

Close to 100 visitors had come each day to see the clusters of butterflies in the trees, but on Saturday as daybreak came, the cars lined down the one land road from the tip of the peninsula as visitors watched the butterflies as the sun broke over the horizon and began to warm the trees where their roosted.

Just a few at first then bunches of 100 or so, until only a few were left. Some headed straight over the lake while others rose and circled around the point several times before leaving. Several even headed down into the flowers for a sip of nectar before leaving.

There were plenty of “ooos” and “ahs” as the larger groups fluttered off in spectacular fashion. The crowd was able to watch one of the greatest migration stories as these small creatures continue their epic trips south for the winter.