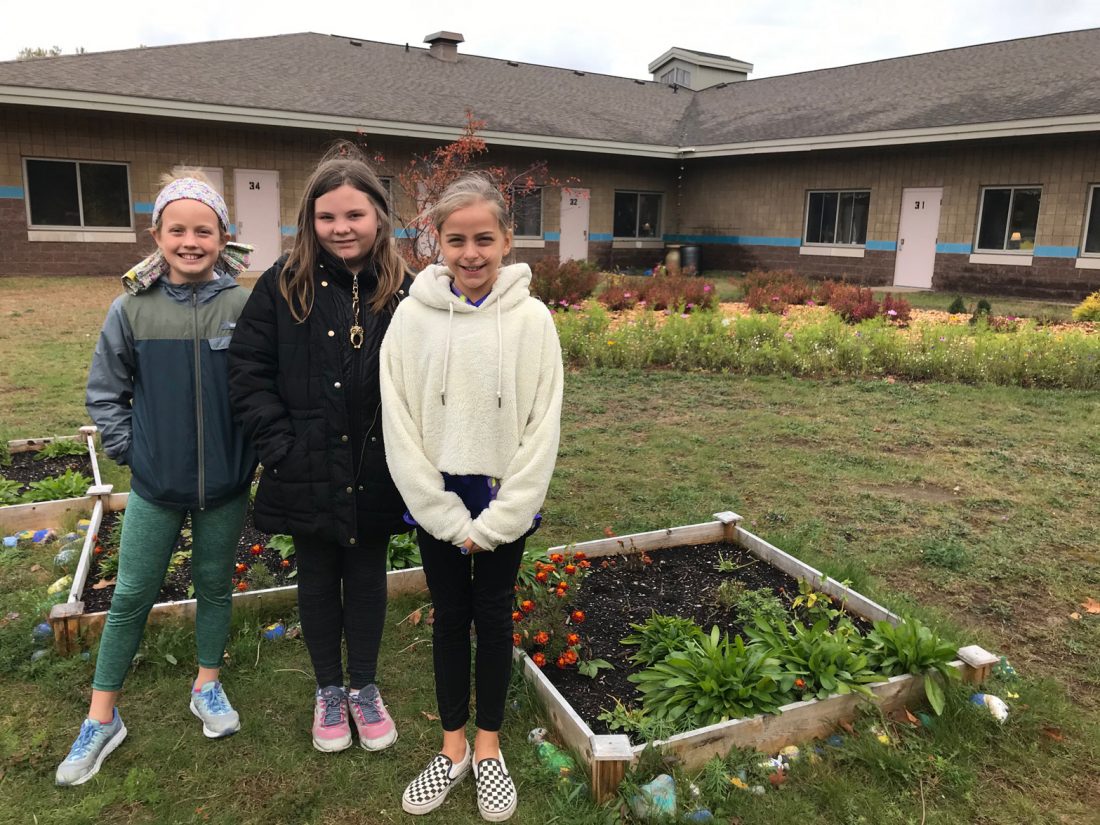 Members of the Change 4 Change Club at Superior Hills Elementary School in Marquette show off the school’s garden, which is just one of the earth-friendly projects going on outside and inside the building. From left are Harper Pool, Josie Summers and Anna Bernard. (Journal photo by Christie Bleck)

MARQUETTE — Swingsets and monkey bars are fun for youngsters, but a natural setting can provide the fun as well as an immersive experience.

Superior Hills Elementary School is becoming more environmentally friendly, inside and out.

“Last year, an idea came from our school to sort of beautify the grounds, and we decided doing a garden would be something we wanted to do,” said fifth-grade teacher Mindy Longton teaches science at the school.

So, Longton wrote for and received a Grow UP Agri Grant with the help of Abbey Palmer, Michigan State University Extension educator with the MSU Upper Peninsula Research and Extension Center. Donations also were received from Brian Black, an instructor at Bay College, for native plants such as green-headed coneflowers, butterflyweed and cup plants.

That garden is taking off with the native plants, which Longton noted take care of themselves.

Her curricula’s science standards involve Longton’s students having to understand the role of decomposers, she said, so her classroom has an actual worm composter on one side where kids can put their food, which then breaks down.

Nutrients from the composter then are used to feed the nearby classroom tower garden, where things like lettuce are being grown.

On the other side of the classroom is a aquaponic garden where a betta, a type of tropical fish, is used to grow greens.

The students can watch the fish swim, but perhaps the most important part of the garden can’t be readily seen.

Part of the grant involves showing how organisms work off each other, Longton said, and this is where the aquaponic garden comes in handy — the plants feeding the fish and the fish feeding the plants such as radishes and wheatgrass, which the kids get to taste.

The betta initially is fed food.

“Its waste, or like the kids like to say, its fish poop, is turning it into nutrients,” Longton said.

The waste is pumped up into another section, with the nutrients going into the plants and allowing them to flourish.

Material from two tower composters, the worm composter and an outside drum composter will be used for the current garden as well as more plots.

“The whole school is starting to take their snacks — their healthy snacks, things that are all vegetable or fruit — and putting them in, and we’re gong to take that and make more gardens with soil, and then we’ve started plants to put in those gardens and just keep expanding it,” Longton said.

It’s never too early to become an environmentalist, and some Superior Hills students already are involved in the movement through its Change 4 Change Club.

“We just wanted to make our school a greener and more earth-friendly place for our friends,” said one of its members, student Harper Pool.

As with many youngsters of her age, peers are important, and Harper said one of her friends is concerned about the earth. So, the idea caught on.

The club also trying to get students to reduce their use of plastic straws, although that’s voluntary.

“We don’t want to put pressure on anyone to say, ‘You can’t use straws,'” Harper said.

“We are now recycling milk cartons instead of just throwing them away after snack,” Anna said. “People get recess milk at snack, and they just throw them away, even with extra milk in them. Now they’re like dumping them out and rinsing them out and putting them in the recycling bin.”

Student Josie Summers also is involved in the club mission, having made an earth-friendly poster for a contest last school year.

In fact, the art of making posters continues at Superior Hills with the intent of getting people to rinse and recycling their cartons.

“This group just started making posters, trying to put things up in our school convincing people to start using this new process of washing them out,” Longton said. “It’s just habit. We’ve always just thrown them (out), so we’re trying to change people’s habits, and people are excited about it.”

As with many good endeavors, however, there are some drawbacks, and fruit flies happen to be one of those at Superior Hills. To combat this issue, the school is using a strip to trap the tiny insects.

However, the lack of fruit fly predators is one of the lessons taught at Superior Hills.

“One of the science standards is talking about what you need in an ecosystem,” Longton said, “and so we got a great thing going, but we’re missing a huge thing, which is causing this major problem.”

One of the plusses in the project, though, is the “worm juice” that comes out of the bottom of composter.

Apparently, a mixture of one part worm juice to 10 parts water makes for a good concoction.

To become more involved on Social Emotional Learning — a process for learning life skills that involves recognizing emotions and managing feelings — she said another idea is to make the playground area into a natural setting, which already is adjacent to its new book trail that winds through woods. The trail, a collaboration between Marquette Area Public Schools and the Noquemanon Trail Network, has installations of story pages along the path.

Another goal is to fill the school’s front lawn with flowers, which should not only benefit the bees, butterflies and birds that visit it but the public as well, considering many people regularly walk by the spot.

In addition to the grant, the Marquette Education Foundation donated two greenhouses for the project. The school also received help in its environmental endeavors from Elise Desjarlais, coordinator of the Lake to Lake Cooperative Invasive Species Management Area, and Brian Prill, a teacher at Marquette Alternative High School.

Of course, it could use more help from the community, and anyone interested in providing that help can call the school at 906-225-4295.