Get a closer look at MooseWood Nature Center 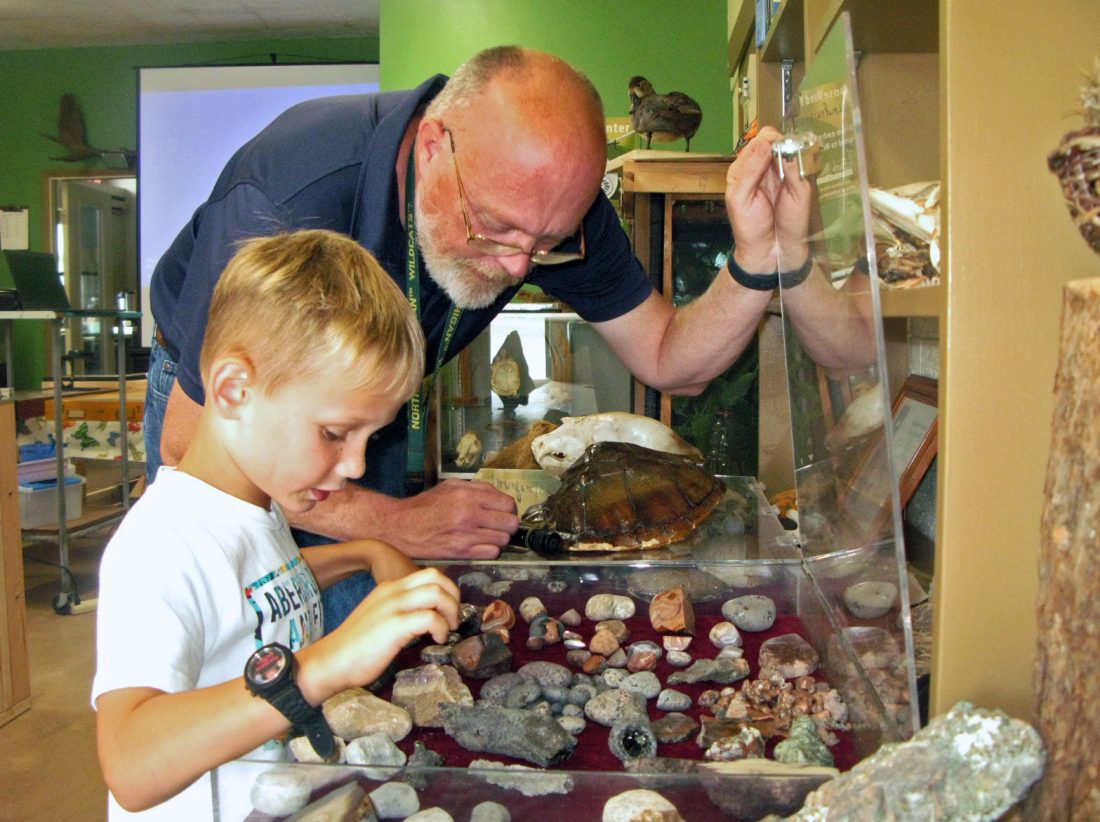 MARQUETTE — An endoscope can give a viewer a look at the inside of a paper wasp nest, something only a paper wasp typically would see.

However, MooseWood Nature Center is one place that has an endoscope for such a purpose — with the bonus that the wasps inside are long deceased.

The nature center, located at Presque Isle Park near the former Shiras Pool, has been adding exhibits and extending center hours to expand what it offers to the public.

A display containing rocks such as agates, copper and syenite with fluorescent sodalite, which glows when held under an ultraviolet light — fascinated 5-year-old Jagger Parkkonen, who lives in South Carolina but visited MooseWood with a relative on Tuesday morning.

“I wonder what kind of rock is this?” he asked, with the rock in question being a polished agate.

The fact that young Jagger could visit MooseWood on a Tuesday was unusual considering the center hadn’t been open on that day until recently. Normal hours had been noon to 4 p.m. Saturdays and Sundays, but the facility has been open on other days too this summer to bring more people through the doors. Current hours are 10 a.m. to 6 p.m. Tuesday depending on volunteer availability, and noon to 4 p.m. Friday through Sunday.

And when they do walk in, there’s more to see.

For example, Erik Johnson, curator of specimens and a MooseWood board member, donated the rocks, which are displayed near animal skulls and turtle shells — which may be the closest some people get to touching these animal parts. Rock jewelry classes also are in the works.

However, Johnson is familiar with other attractions at the nature center, including the endoscope. In fact, he hopes MooseWood can acquire more endoscopes so kids can go outside and view little-seen spaces such as animal holes or inside trees.

One of the biggest changes will be the new and larger tank for Shelldon, MooseWood’s resident live snapping turtle and a main attraction, considering its dinosaur-like appearance.

“It’s been, like, three years in the making,” Johnson said.

The unveiling of the new tank is scheduled for Sept. 20, with details to be released later. From noon to 2 p.m. Aug. 24, a session to paint turtle rocks is planned, partly to bring awareness to Shelldon’s new home.

Another upcoming event is an underwater cleanup scheduled at Mattson Lower Harbor Park from 10 a.m. to 1 p.m. Aug. 10. Johnson will represent MooseWood at the event, which will be led by local scuba diver Don Fassbender.

These are one-time events, although Shelldon is expected to thrive for quite a while in its new tank.

Another dimension, one that should have long-lasting effects, is coming to MooseWood soon.

Johnson, who is working toward a master’s degree in behavioral analysis at Northern Michigan University, hopes to start an autism-friendly nature program for MooseWood.

Johnson is looking for parents with children on the spectrum to gather for a meeting he will schedule in August to see how MooseWood can help these youngsters.

“As a science educator, this involves children with sensory, emotional and intellectual difficulties,” he said. “The objective is interpreting nature and nature-based activities with them.”

Johnson, though, needs parental input and volunteer participation to ensure MooseWood can be open consistently for this purpose.

He also wants to involve the NMU Department of Psychology for guidance.

However, MooseWood visitors in the meantime can walk through the building and learn about nature at their own pace, although visitor numbers can fluctuate depending on the season.

“We’ve had kind of a lag of people coming in,” Johnson said. “We had a lot of people from out of state, really. We’re trying to get some of the local people to come in.”

One of MooseWood’s efforts, he said, is getting the activities more consistent instead of having them “here and there.” Those activities include a microscope laboratory, a magnetics laboratory and shark dissection for elementary school students.

People who walk through the doors now, though, can view taxidermy as well as colorful posters about Michigan frogs and toads, snakes and turtles. They can get a close-up look at insect specimens displayed under glass.

They can see MooseWood’s live animals, which include turtles, frogs, corn snakes and — during the monarch butterfly chrysalis season going on now — a display containing green chrysalises flecked with gold, waiting for the monarchs inside them to emerge. Of course, they’re released into the wild soon after.

“It’s nice to be able to have this opportunity to reach out to the public,” MooseWood Director Alex Bott said.

The Marquette-Alger Regional Educational Service Agency now is involved with MooseWood too. A youngster from the MARESA Job Club came out on Tuesday to help Bott — and have fun playing with the jaw of an animal skeleton put in the mouth of a stuffed animal.

Donations as well as its popular Haunted Bog Walk in October comprise a big part of sustaining MooseWood financially, but other ways to bring in money are being considered.

One plan, Johnson said, calls for a section to include goods created by craftspeople and sold on consignment at the nature center.

A continuing issue, though, remains the infrastructure of the aging building, which the city of Marquette rents to MooseWood. Johnson said obtaining a grant to address this issue is a possibility, so someone experienced a writing grants would be a good addition to MooseWood.

Another necessity is volunteers. At moosewood.org/volunteer-opportunities, ways to get involved are detailed. These include weed/invasive removal, birthday party hosting and working on the newsletter.

Although it probably can’t become involved in scientific research as much as a university could, Johnson said MooseWood plans to partner with the city of Marquette for a deer census and a trash awareness program.

Partnerships, he stressed, are important to MooseWood’s mission.

“We need that,” Johnson said.

For more information on upcoming events and to donate, visit moosewood.org, call 906-228-0250 or email moosewoodnc@gmail.com. For details on upcoming programs and hours, visit its Facebook page.