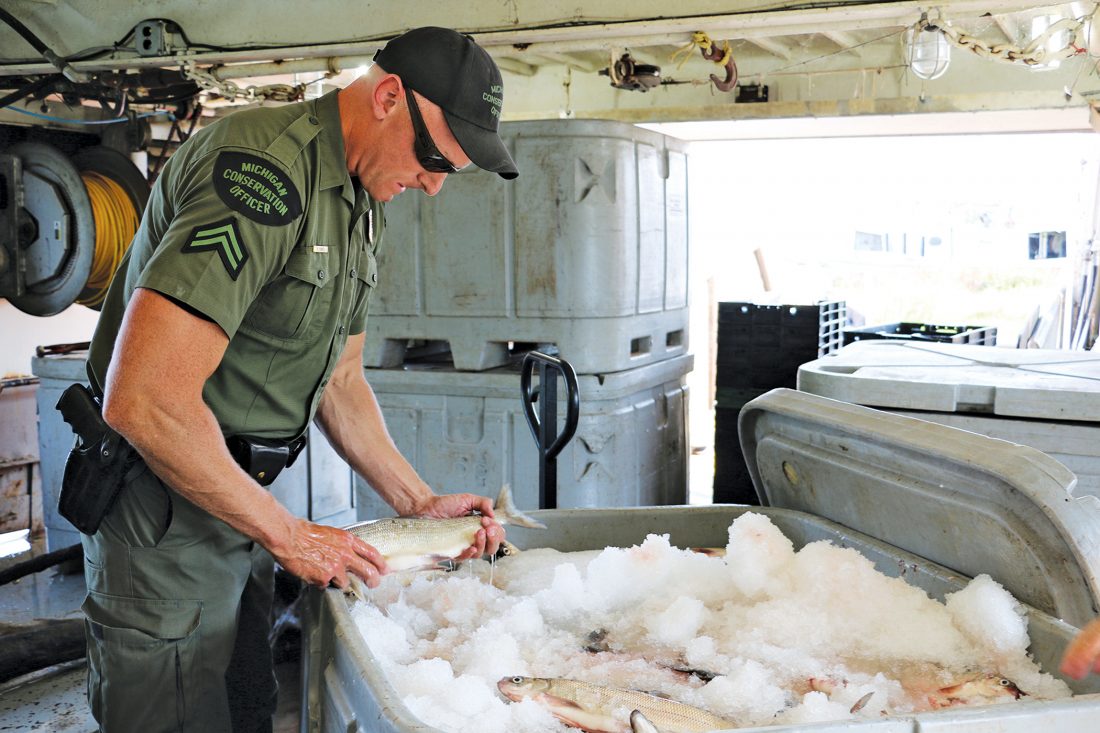 Gear, food and water are packed.

Preferably leaving the dock by 4 a.m., conservation officers in the Michigan Department of Natural Resources’ Great Lakes Enforcement Unit are ready to tackle the day, often logging 16-hour shifts, traveling up to 150 miles in the patrol vessel they refer to as their “office.”

Coming from the ranks within the DNR’s Law Enforcement Division, conservation officers in the unit acquire additional skills and training related to their job function.

“Our job is to protect the resource,” said Cpl. Marvin Gerlach, a conservation officer with the unit. “We want every child to have the same experience that their parents or grandparents were able to have — for young anglers to have the rush of excitement when they catch their first big fish.

“Without regulations, anyone could overfish. We want to protect fish stocks to ensure the future of the commercial fishing industry and the sport.”

In 2017, the total value of the take for state-licensed commercial fishers was $4 million.

Michigan’s current commercial fishing laws date back to 1929, when the Michigan Legislature enacted statutes that required licenses; created a fee structure, regulated how, when, where and what fish species could be taken; set minimum size limits; mandated harvest reporting; and established penalties for those caught violating the law.

“Today, the commercial fishing laws are outdated and need to be updated to meet the modern needs of protecting fish populations,” Herbst said. “For example, current fines for any commercial fishing violation results in a maximum fine of $100 — a significant amount of cash 90 years ago, but not a substantial deterrent in 2019.”

Legal buoys and nets are marked and have a tag on them to identify the license holder.

Illegal fishing activity takes away from the next generation’s ability to enjoy the natural resource and hurts the industry. Overfishing one year can impact the industry for years to come, by decreasing the spawning population.

On the water, conservation officers check netting activity and any commercial fishing vessels they encounter. The officers use digital plotting charts to mark buoys and nets.

Using advanced sonar and radar technology, conservation officers can distinguish objects in the water, including schools of fish and the different types of nets, such as trap and gill nets.

Legal buoys and nets are marked with a tag, identifying the license holder. This is particularly helpful in identifying signs of illegal fishing activity or in finding an owner if a net becomes unsecured and floats loose, which can create a dangerous situation.

“Unfortunately, nets do break loose from their anchors,” said Lt. Terry Short, another conservation officer with the unit. “Nets that break loose may float a (good) distance from where they originated and can float at or just under the surface of the water, making them very dangerous for boaters and anglers.”

Short emphasizes that it’s important to know where you are boating and being aware of where nets are placed by watching for buoys.

“The water can create visual illusions, particularly when on the Great Lakes,” Short said. “It’s important to have an alert, experienced vessel operator. Always be on the lookout for objects floating at or near the surface of the water and make sure you have a United States Coast Guard-approved life jacket for the activity you are doing.”

Boaters, anglers and divers often play an important role in reporting drifting nets or other hazards, which the unit investigates.

Divers who had found and reported the net assisted conservation officers by attaching a line to the net and running it to the surface for the officers to pull, using equipment on their patrol vessel.

Tribal commercial fishers have more authorized territory where they can fish and are permitted to use additional equipment and tactics. Unit officers work closely with tribal law enforcement to ensure regulations are being followed and to educate non-tribal anglers about each license-holder’s treaty fishing rights.

After the fall fishing season, conservation officers with the unit spend time on land inspecting wholesaler facility records and continue vessel inspections. They also follow-up on any leads of illegal activity they may have suspected when they were on the water.

In 2018, a federal court case was adjudicated involving a state-licensed wholesaler. The DNR collaborated with the U.S. Fish and Wildlife Service on the multistate, undercover investigation, nicknamed “Fishing for Funds.” The agencies investigated the illegal commercialization of fish from the Great Lakes.

As a result of the two-year investigation, a state-licensed wholesaler pleaded guilty, was sentenced to four months in federal prison and ordered to pay up to $270,000 in restitution for selling over 5,000 pounds of illegally harvested lake trout and falsifying records.

Working from their offshore office space and in onshore investigations, conservation officers of the DNR’s Great Lakes Enforcement Unit are responsible for protecting the Great Lakes commercial fishing industry for future generations — not just for future anglers, but fish consumers as well.

Anyone who witnesses or suspects a natural resources violation is asked to report it immediately by calling or texting the DNR’s Report All Poaching hotline at 1-800-292-7800. DNR dispatchers are always available. Individuals reporting tips may remain anonymous and may qualify for a reward if supplied information leads to the arrest and conviction of a poacher.