Under the big top 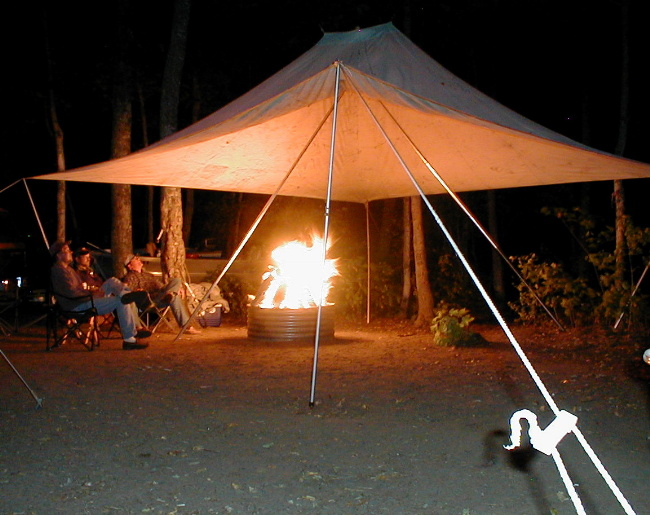 MARQUETTE — To many people, sitting around a campfire is one of the best ways to spend an evening outdoors.

If it’s not too close to the flame, mosquitoes might feel that way too.

Local inventor Earl Senchuk of Marquette has developed what he calls the Crown FireTent, which might make it easier for people to enjoy the outdoors in open shelter.

“The fire emits all this infrared radiation, and so that bounces off the inside of the tent and goes directly down the ground — and it’s designed to do that — and that heats the ground up just a little bit,” Senchuk said.“What that does is, all the air under the tent is warmer than the outside air, so that causes buoyancy.”

He added a chimney to enhance the draw for a “stack effect” that he said creates a breeze, which comes in 360 degrees behind everyone.

“That’s where the bug issue comes in,” Senchuk said. “Bugs don’t know you’re there because everything’s going up the chimney. It’s too high for the bugs to know where you are.”

Senchuk is an artist as well, having made the statue of the late beloved window-washer Phil Niemisto that sits at the downtown Marquette pocket park along Washington Street that bears Niemisto’s name

In 2002, Senchuk brought examples of two shelter projects from which to select for possible manufacture to Anchor Industries, based in Evansville, Indiana.

One was a series of collapsible greenhouses while the other was a tabletop model of a proposed square FireTent design.

Anchor Industries licensed the patent for the greenhouses but also made several prototypes of the FireTent design, one of which, Senchuk said, has been in use ever since, with almost 30 cords of wood having been burned under this earlier square prototype.

The title of the current pending patent is “ornamental open-top tent.”

The Crown FireTent offers several benefits to the user, including:

≤ Allowing people to socialize around a fire, even in the rain.

≤ One person easily setting up the tent.

≤ The fire burning cleaner by the added oxygen from convection.

≤ The ability to be used for shade when a fire isn’t feasible.

Engineering assistance with computer-aided design was provided through Invent@NMU, which helps people bring their ideas to fruition.

“People like me can’t afford to do this kind of stuff,” Senchuk said, “and they are critical for helping inventors.”

Jason Schaen served as the Invent@NMU project management lead for the Crown FireTent.

“Invent@NMU helps inventors and entrepreneurs grow their product and business ideas — no matter where they are in the process,” Schaen said in an email. “Earl came to us with a prototype and was able to jump into our process quickly.

“We assisted with creating CAD for his design that he was able to bring to a U.P.-based manufacturer, as well as provided guidance and mentorship as he moved through the entrepreneurial process. We are excited to see Earl’s hard work pay off and his product vision come to life.”

Senchuk is interested in the city of Marquette having “community campfires” at Mattson Lower Harbor Park, a concept that in turn garnered interest from Bob Jacquart, chief executive officer and owner of Jacquart Fabric Products in Ironwood, which is the parent company of the famed Stormy Kromer hats.

“The intent for the concept of having community campfires is to provide to a city a free place for residents to go to enjoy entertainment by way of local musicians, storytelling, discussing local issues and politics, poetry reading or just simply to socialize by a fire, even when it rains,” Senchuk said.

With CAD engineering assistance from Invent@NMU and sewing performed by Jacquart Fabric Products, the Crown FireTent prototype is undergoing a materials testing phase and accessory development, he said, with a price to be determined after production materials are evaluated and testing is complete.

The Crown FireTent’s dimensions will be 16 feet flat-to-flat and about 18 feet point-to-point in a hexagonal shape, with perimeter poles 6 feet off the ground. A specialized seam will be used, Senchuk noted, to keep it rainproof. Up to 12 people can sit under the tent in standard-sized folding chairs.

Senchuk said it isn’t known yet who will be the manufacturer, although he wants to keep employment in the Upper Peninsula. He also expects the patent for the Crown FireTent to be issued in four to five months.