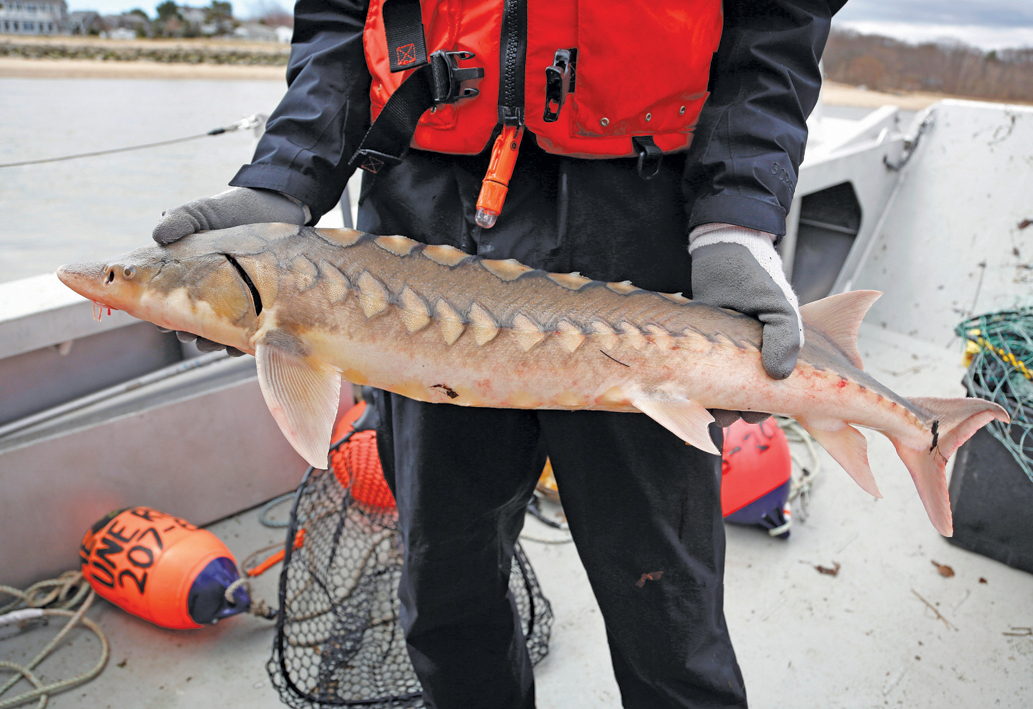 In this Thursday, April 25, 2019 photo, a researcher holds an endangered shortnose sturgeon caught in a net in the Saco River in Biddeford, Maine. The fish was measured and tagged before being released by students at the University of New England. Sturgeon were America’s vanishing dinosaurs, armor-plated beasts that crowded the nation’s rivers until mankind’s craving for caviar pushed them to the edge of extinction. (AP Photo/Robert F. Bukaty)

CHARLES CITY, Va. (AP) — Sturgeon were America’s vanishing dinosaurs, armor-plated beasts that crowded the nation’s rivers until mankind’s craving for caviar pushed them to the edge of extinction.

More than a century later, some populations of the massive bottom feeding fish are showing signs of recovery in the dark corners of U.S. waterways.

Increased numbers are appearing in the cold streams of Maine, the lakes of Michigan and Wisconsin and the coffee-colored waters of Florida’s Suwannee River.

A 14-foot Atlantic sturgeon — as long as a Volkswagen Beetle — was recently spotted in New York’s Hudson River.

Following the late 1800s caviar rush, America’s nine sturgeon species and subspecies were plagued by pollution, dams and overfishing. Steep declines in many populations weren’t fully apparent until the 1990s.

“However, in the past three decades, sturgeon have been among the most studied species in North America as a result of their threatened or endangered status,” said James Crossman, president of The North American Sturgeon and Paddlefish Society, a conservation group.

Scientists have been finding sturgeon in places where they were thought to be long gone. And they’re seeing increased numbers of them in some rivers because of cleaner water, dam removals and fishing bans.

These discoveries provide some hope for a fish that is among the world’s most threatened.

But the U.S. sturgeon population is only a tiny fraction of what it once was — and the health of each species and regional populations vary widely.

While some white sturgeon populations on the Pacific Coast are abundant enough to support limited recreational and commercial fishing, Alabama sturgeon are so rare that none have been caught for years.

Across America, dams still keep some sturgeon populations low by blocking ancient spawning routes. And the fish face newer threats such as rising water temperatures from climate change and the sharp propellers of cargo ships.