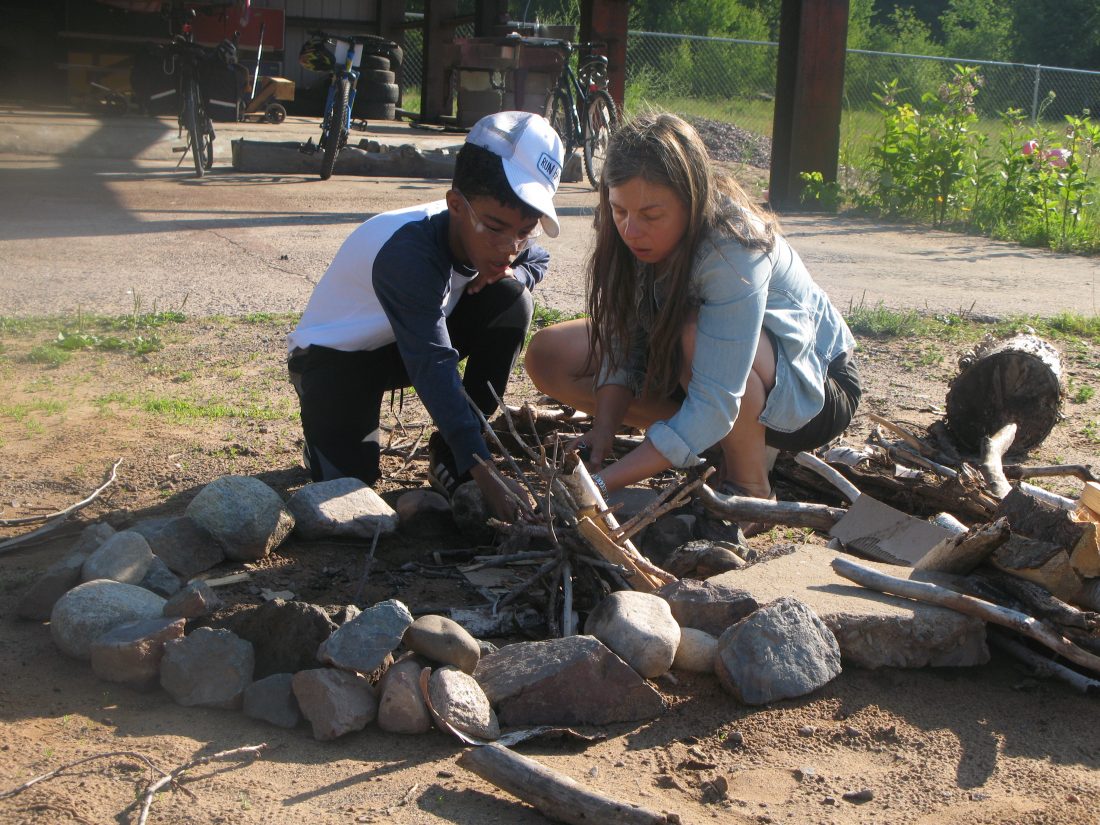 Amber Dohrenwend, one of the leaders of this year’s Adventure Building Camp, helps 9-year-old Obi Eruchalu build a campfire. A major project was the building of a terrain park. (Journal photo by Christie Bleck)

Kids of various ages have been working in sessions this summer at the Dead River Storage warehouse not far from the Dead River in Marquette Township to create structures out of various materials in a natural setting.

The purpose of the camp was to give kids a sense of confidence as they built things.

Amber and Pete Dohrenwend have been overseeing this year’s sessions.

“We are working on building a terrain park inside the warehouse,” Amber Dohrenwend said on Wednesday. “You can see the kids are building some different elements that they’ve been testing out, and then we’re going to connect them together in loops.”

She said this summer marks the fourth year of the adventure camp.

“This has been a neat project because there are so many different options of elements that they can build and kind of bring their own ideas,” Amber Dohrenwend said.

Sometimes an idea has to be tweaked.

For instance, she said when the youngsters tested a ramp tabletop on Tuesday, they discovered the angle was too severe depending on the speed.

“They decided it would be better to come up on this side,” Amber Dohrenwend said.

The direction of the loop in the terrain park came into play as well, she said, as did whether they were testing the structure inside the warehouse — which meant a lower speed — or outside the building where they could ride faster.

After all, the terrain park served as an obstacle course for mountain bikes.

Another thing they discovered was the angle of a berm being too tight.

“So, they took it apart and readjusted the angle so it’s easier,” Amber Dohrenwend said.

A teeter-totter also was being created from wood.

Under the Dohrenwends’ supervision and wearing safety glasses, the campers devised ways to make structures on their own, although they had to work through some issues and find better ways of making things, such as flattening a board for easier construction.

What happens to the items after all their kids’ hard work?

Amber Dohrenwend said that usually on Thursdays at the end of camp sessions, parents join their kids for a “take-apart party” where the kids show off the elements they made.

“Sometimes there are some projects kids are really excited about, and their parents have a place for them and they take them home,” she said. “Usually we just disassemble everything and we use the materials.”

Building an adventure at the camp, though, involves more than drilling and hammering. The camp is located in a natural setting surrounded by water, trees and wildflowers.

So, the youngsters get to act like traditional campers, going for a swim every day — usually on the Dead River — plus they go mountain biking on trails and pick berries if they’re in season, Amber Dohrenwend said.

Fortunately for the campers this past week, the blueberries were just starting to ripen, so she said they took advantage of that bounty.

It also was nesting season for some birds, and the campers could get a reasonably close view of a barn swallow nest of chirping birds inside the warehouse where one of the parents perched on a nearby pole to keep an eye on them — presumably the young birds, not the kids, who left the nest alone.

This year the campers went to the Marquette BMX track to get some inspiration for their terrain park, she said.

“Depending on each week, we go to different places and have different adventures,” Amber Dohrenwend said.

One adventure 11-year-old Jack Kasten of Skandia had during the recent session was building a cart, or what he called “just a cart.”

The boy might have been too modest. He did have at least one challenge.

“You’ve got to figure out if things are going to be balanced,” Quincie said.

Again, trial and error can be important in their building processes.

“You’ve got to have supports to make sure that you can support the weight,” Quincie said, “and if you build something, you’ve got to make sure, since we’re building a BMX track, it’s not too sharp of a turn.”

In fact, once they had to take one section of an element down and rebuild it because, she noted, it was too sharp.

Obi Eruchalu, 9, who was visiting Marquette from Colorado, managed to wield a heavy axe to cut wood. He helped build a campfire too, under Amber Dohrenwend’s watchful eye.

There was a lot of work during the camp, but the kids also got a lot of enjoyment from their activities.

For more information on the camp, visit www.warehousemqt.org.