The Upper Peninsula Land Conservancy is planning hikes to several regional natural areas this summer, which will give participants a chance to identify plants and look at scenic vistas, among other activities. The UPLC also is holding a 20th anniversary celebration in August. (Photo courtesy of the UPLC)

Troy’s woods in pictured. (Photo courtesy of the UPLC)

The Dead River Forest is viewed from afar. (Photo courtesy of the UPLC) 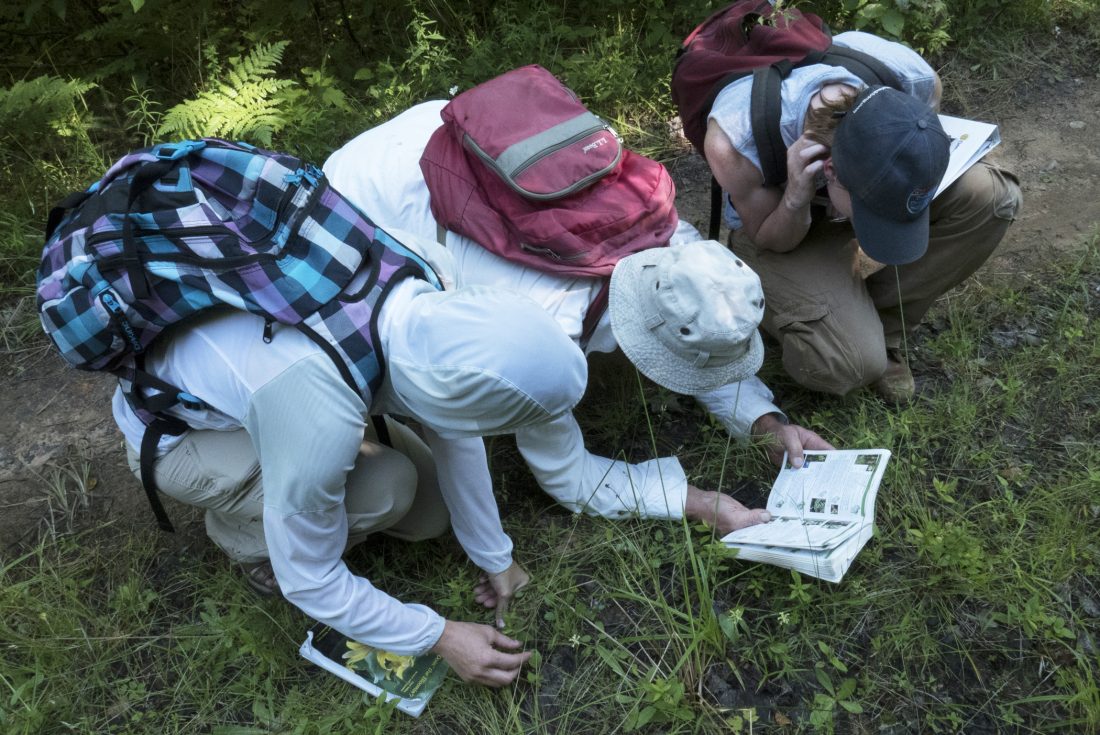 The Upper Peninsula Land Conservancy is planning hikes to several regional natural areas this summer, which will give participants a chance to identify plants and look at scenic vistas, among other activities. The UPLC also is holding a 20th anniversary celebration in August. (Photo courtesy of the UPLC)

MARQUETTE — The Upper Peninsula Land Conservancy has a two-pronged mission: to promote healthy ecosystems through permanent legal protection and ecological management of conservation lands, and by engaging the public in protecting and enjoying those lands.

Activities planned for this summer will allow people to view hard-to-reach places the UPLC manages, or wants to manage.

An exploration of the proposed Dead River Community Forest is scheduled for 10 a.m. to 3 p.m. June 29, with participants meeting at the trailhead of the Vielmetti-Peters Reserve, located near 600 Brickyard Road in Negaunee Township.

“We still need to raise close to $200,000,” Denham said. “We’ve got three years to do it, but that includes money for trail building and sign design and installation. 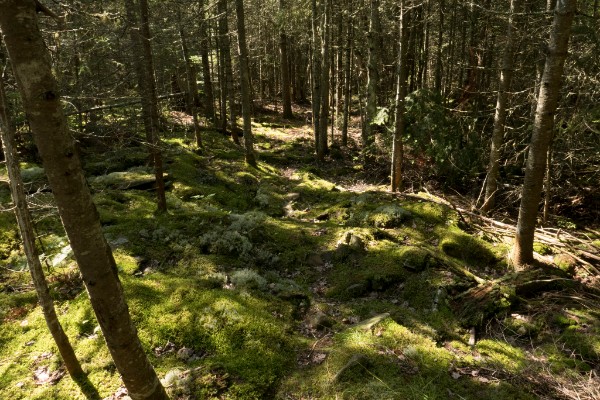 Troy's woods in pictured. (Photo courtesy of the UPLC)

The June 29 event, she said, will involve an exploration hike of about 5 or 6 miles on a proposed trail, and, it is hoped, a trek to Trestle Falls.

But those 5 or 6 off-trail miles might not be the easiest to travel, so sturdy shoes and walking sticks could come in useful.

The area between U.S. 41 and the Dead River at that spot is “absolutely dramatic,” Denham said, with rock outcroppings, steep hills, deep forests and rolling hills part of the landscape.

“We’re really looking forward to opening up the area to the public,” Denham said. 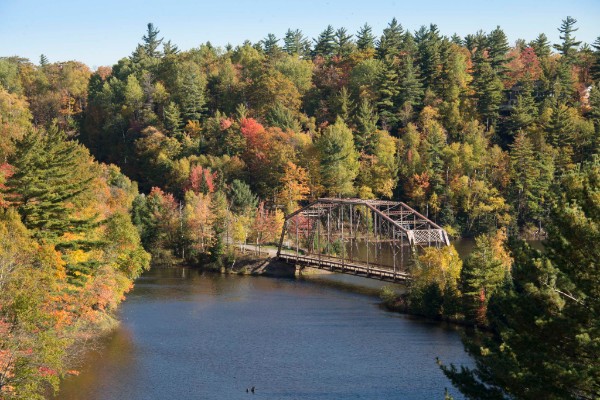 The Dead River Forest is viewed from afar. (Photo courtesy of the UPLC)

Community-input sessions on the Dead River Community Forest are planned for the summer, she said.

Next on the summer UPLC agenda is an approximate 3-mile hike at Tory’s Woods set for 1 to 4 p.m. July 27. The sanctuary, Denham said, is by the mouth of the Sand River about 12 miles east of the M-28/U.S. 41 intersection in Harvey.

Hikers will be able to view new trail improvements that include interpretive signs designed by Northern Michigan University students on the south loop. Again, sturdy shoes and walking sticks are recommended since the trail is rocky.

“It’s my ‘happy place,'” Denham said. “It really is. It’s very dense forest in some areas, but the wind-throw opens up these canopy gaps and you just get sunlight down.

Ever heard of biomimicry? People can discover this unusual topic during “Walk & Wonder: Biomimicry!” scheduled for 6 to 7 p.m. Aug. 8, with participants to meet at the UPLC’s new office at 148 W. Hewitt Ave., Marquette.

Adina Daar, UPLC’s administrative office manager and biomimicry educator, will lead the guided walk, which will focus just on the area around the UPLC office.

“She said she’ll be surprised if we get more than a few blocks,” Denham said.

So, comfortable shoes probably will suffice on this walk.

Biomimicry, Denham said, is the study of nature to solve “big problems.” During the Aug. 8 walk, Daar will look at nature, its adaptations and how they can be applied to people’s lives, science and industry.

Velcro is a famous example of biomimicry, Denham said.

“Velcro was created after somebody studied burs and the way that they stick to clothes,” she said.

According to the Biomimicry Institute, based in Missoula, Montana, the core idea is that nature already has solved many problems that challenge people, and the goal is to create new ways of living that are well adapted to life on Earth in the long haul.

The UPLC will celebrate its 20th anniversary on Aug. 21, with an open house at the new office from 3 to 6 p.m. Dinner and music is planned for 6 to 9 p.m.

The office, by the way, includes a native plant garden-in-the-making, with Bay College donating the plants.

A light hike to the Dead River Community Forest’s bridges parcel is scheduled for 5:30 to 7 p.m.

Indian Lake Exploration Day will be on Aug. 31, with meet-up times to be announced.

“Indian Lake is one of my favorite group trips of the year,” said Denham, who noted the nature preserve is in the Michigamme Highlands.

“We now protect the vast majority of the Indian Lake watershed area, which is kind of a keystone piece in the Peshekee River and Lake Michigamme watersheds,” Denham said. “It’s a really beautiful spot.”

The area soon should be connected to another beautiful spot; planned this summer is a new trail leading to the spot from Craig Lake State Park, she said.

What Denham called “another big adventure day” is Bald Mountain Exploration Day, set for Sept. 28, again with meet-up times to be announced. An RSVP is required for this trip.

She said UPLC is working toward protecting this area, which is on the edge of the Huron Mountains range.

“While we’re working on it, we’re bringing people out there to, A, teach them the process of what it is what we do, but also — it’s just stinking beautiful out there,” Denham said.

There’s a lot to see.

Denham said that from the top of Bald Mountain, people can see the Huron Islands wilderness, the Huron Mountains, the mouth of the Huron River, Point Abbaye and the Keweenaw Peninsula.

The hike will take place during peak autumn colors.

Although a local guide will be there to relate good nature stories, Denham cautioned the trek is not an easy one.

“It is, again, a very rugged off-trail hike,” she said.

Another Walk & Wonder hike on “Leaf Peepers” at the Dead River Community Forest is planned for Oct. 5.

This easier hike, Denham said, will focus on the autumn leaf colors at the bridges portion of the proposed community forest.

Events such as the summer hikes planned for this summer not only allow people to view parts of the Upper Peninsula they might not see otherwise, they can learn about UPLC’s mission.

“We’ve really been focusing the last three years on building trails and having events to get people out onto the lands that we’re protecting,” she said.

For more information about UPLC, visit uplandconservancy.org or call 906-225-8067.