University instructor Mary Martin, who led a class on lichens on Saturday at Wetmore Landing, collected this specimen in the fall from a sugar maple in another area. (Journal photo by Christie Bleck)

Mary Martin, a biology instructor at Northern Michigan University, leads a class on lichens on Saturday at Wetmore Landing in Marquette Township. The class was part of the Northern Center for Lifelong Learning. (Journal photo by Christie Bleck) 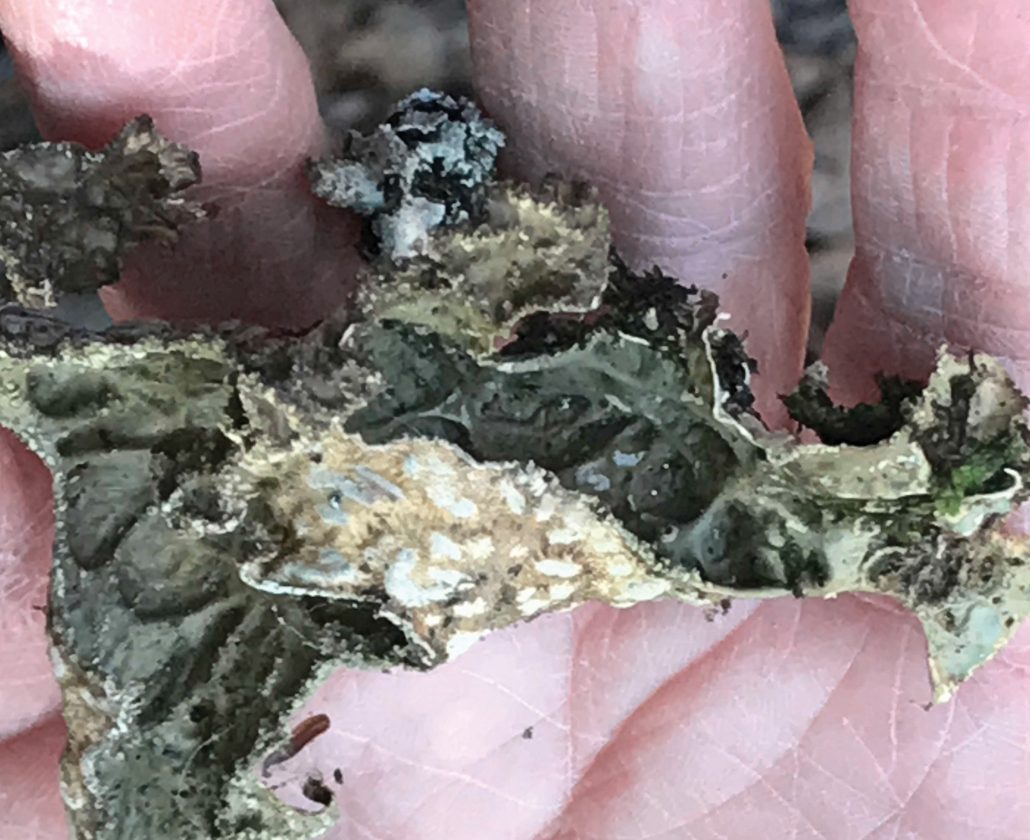 University instructor Mary Martin, who led a class on lichens on Saturday at Wetmore Landing, collected this specimen in the fall from a sugar maple in another area. (Journal photo by Christie Bleck)

MARQUETTE — Wetmore Landing was an ideal spot for searching for lichens on a sunny Saturday morning.

Mary Martin, a biology instructor at Northern Michigan University, on Saturday led hikers on a Northern Center for Lifelong Learning course, “Lichenfest! Learn about Lichens in our Own Backyard.”

As an ecologist, Martin is interested in the relationships between organisms. So, it’s not surprising she’s found something to study with lichens, which she said are in microcosms or tiny ecosystems.

They’re not hard to find.

“They’re everywhere,” Martin said, “and you’re going to find them in places where you may not have noticed them before.” 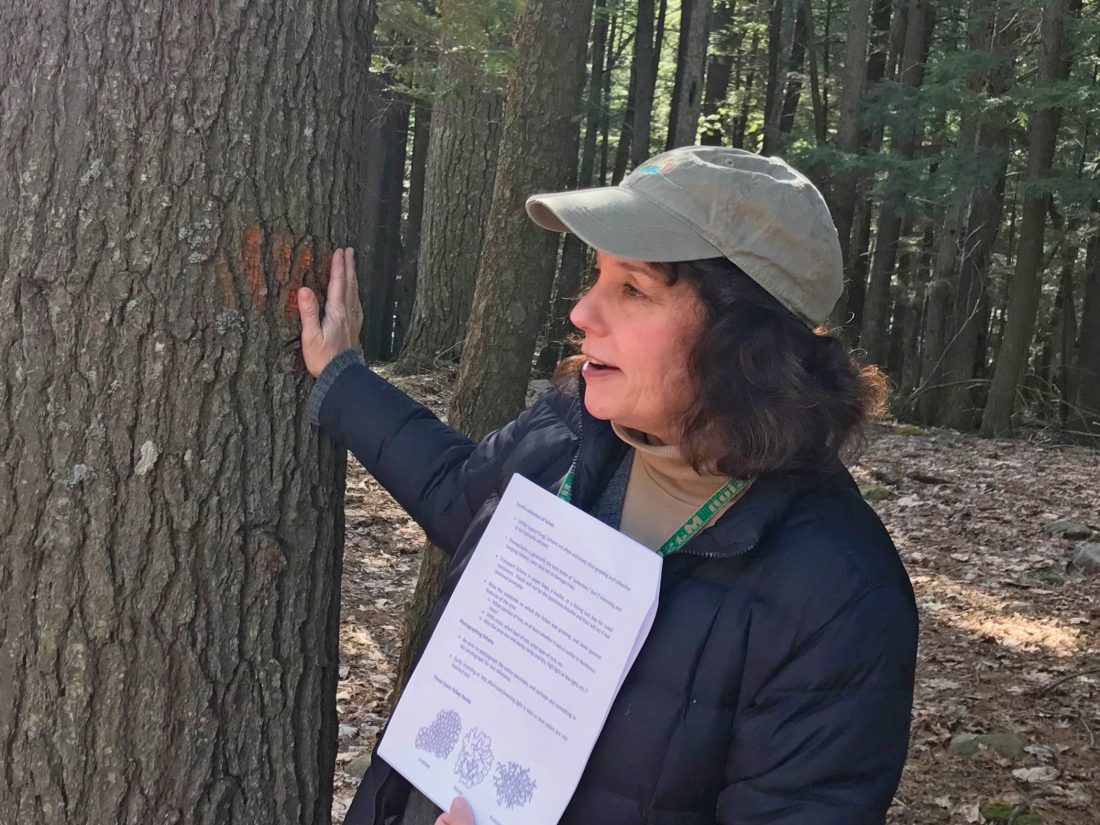 Mary Martin, a biology instructor at Northern Michigan University, leads a class on lichens on Saturday at Wetmore Landing in Marquette Township. The class was part of the Northern Center for Lifelong Learning. (Journal photo by Christie Bleck)

Sometimes they can be obvious.

Martin pointed to a nearby maple tree, which was covered in lichens, leading her to make an interesting observation about lichens and young smooth-barked trees.

“When you start looking at just a small patch, you’ll find that it’s almost hard to see the bark itself because it’s so covered with lichen,” Martin said, “and there may be 20 species on a tree in and of itself, so that’s pretty remarkable.”

She noted there are some 14,000 species of lichens worldwide, and around 3,600 in North America. In the Great Lakes region alone, there are 800 species.

Since she had just two hours to teach about lichens and traveling the globe wasn’t an option, Martin chose Wetmore Landing in Marquette Township for the walk because of its unique lichens, with deciduous and coniferous trees found there.

“Different soil types are going to house different types of lichens,” she said. “Even different rock substrates will have different species of lichen associated with them.”

In fact, Martin suggested the hikers look at the granite rocks at Wetmore Landing to find the interesting lichens growing there.

Wherever they’re found, lichens are fascinating.

“Primarily the structure of the lichen is the fungus,” said Martin, who noted most lichens have a greenish tinge because of photosynthetic partners that are either algae — or cyanobacteria, which can photosynthesize.

Lichens using this type of bacteria can help the environment.

“These cyanobacteria can basically take nitrogen from the atmosphere and convert it to a form that is usable by other organisms, particularly plants,” Martin said.“When the lichen have a cyanobacteria partner that converts atmospheric nitrogen to usable forms of nitrogen, and then the rain falls down the bark of that tree, that nitrogen can get washed in the soil around the tree, and the tree can benefit by up-taking nitrogen.”

Lichens also provide a home for tiny animals such as tartigrades or water bears, which she noted look like little six-legged bears or “roly-poly guys” under a microscope. Birds too use lichens to line and camouflage their nests.

The partnership scenario within a lichen, however, can change, and this is another way it’s unique.

Over the course of a single lichen’s lifetime, it may change photosynthetic partners, she said.

“Are they an organism or are they a consortium of organisms?” Martin said.

Although lichens and hardy and grow in many areas, including granite rocks, she noted people won’t find them in polluted cities.

“They will suck up pollutants out of the atmosphere, and they don’t have a good filtering system, so they don’t get rid of them,” Martin said.

Martin passed out a tip sheet for looking for lichens in the field, which included these things to remember:

≤ Things to take in the field include a camera, field guide, notebook and a hand lens.

≤ Because lichens are slow-growing, collecting typically is not advised, with photography considered the best mode of “collection.”

≤ When taking pictures, photograph the entire specimen. Early morning or late afternoon/evening light is best so colors aren’t washed out.

Martin stressed taking pictures of lichens probably is the best way to enjoy them.

“Scraping that thing off a rock is probably scraping away hundreds of years, if not more, of growth of a lichen,” Martin said.

After Martin explained the basic ecology of lichens, the class members took field guides and magnifying glasses to search for lichens throughout Wetmore Landing.

One of those people was Jeanne Baumann of Marquette, who made an observation that could have parallels with human co-existence.

“They’re fascinating,” Baumann said. “The existence, the biosynthetic relationship in lichens is really interesting to me — getting along together and making something happen that isn’t going to happen on their own.”

For more information on the NCLL, which is affiliated with NMU and the Road Scholar travel organization, call 906-227-2979 or go to nmu.ede.ncll. NCLL also can be found on Facebook.