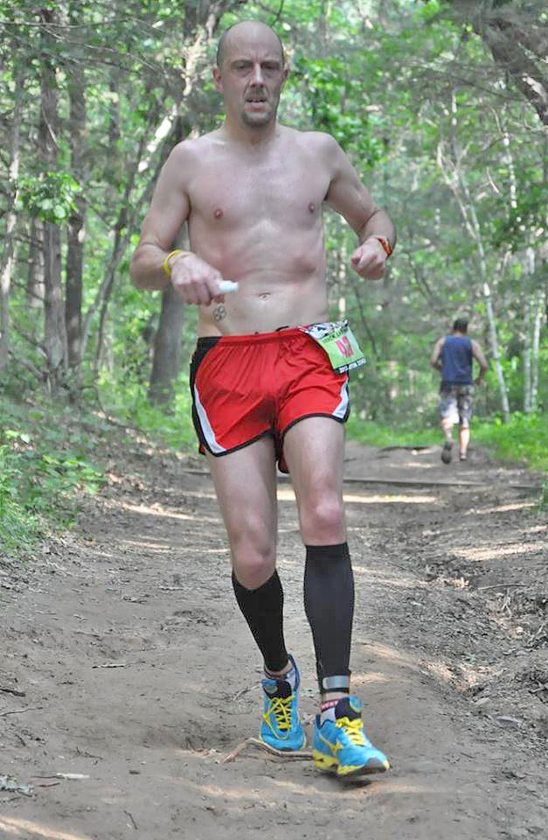 Derek Lindstrom, a 1981 graduate of Marquette Senior High School, takes part in a 25K trail run in July 2015 at Afton State Park in Minnesota. Lindstrom, who suffers from a heart condition, was in the area recently for the Big Bay Relay. (Photo courtesy of Derek Lindstrom)

MARQUETTE — When you have only 17 percent function of your heart, you probably tend to cherish many of life’s little moments others might ignore.

A person’s chance of survival with such a challenge depends on physical conditioning — as well as a positive mental outlook — so it helps if you’ve been a lifelong runner who’s run in more than 100 marathons and is a multiple winner in the annual Big Bay Relay.

Derek Lindstrom, a 1981 graduate of Marquette Senior High School, was in town for the May 18 Big Bay Relay. He and his team finished seventh in the race.

Lindstrom, who lives outside the Twin Cities in Minnesota, shared his thoughts with The Mining Journal about what it’s like to live with his heart ailment, which might be the focus of a film made by a crew based in Portland, Oregon.

He suffered a stroke in March 2018, and if it hadn’t been for that, Lindstrom said he might not have known he had a heart issue, which was diagnosed as ejection fraction caused by a virus.

“The left side of the heart is severely dilated,” Lindstrom said. “It’s huge, and it’s severely scarred.”

He now has a defibrillator implant that keeps him regulated.

Lindstrom, who is 6 feet, 2 inches and weighs between 185 and 190 pounds, didn’t have an inkling of the seriousness of his condition.

“Honestly, I just thought I was getting old,” said the 55-year-old realtor. “I was getting really short of breath. I wasn’t running a lot.”

It all made sense, except it wasn’t just a matter of aging and getting out of shape.

“The crazy part is, anybody that gets to this point, usually they’re on disability,” Lindstrom said. “They’re doing nothing.”

So what keeps him going?

“Those years of running,” he said, although some days are harder for him than others. On the more difficult days, he experiences dizziness or has a hard time getting out of bed.

“A lot of days I just don’t know what to think of it — like how or why?” Lindstrom said.

Because of his condition, he wants to raise awareness of organ donation.

Speaking of which, Lindstrom said he’s not on a list for a heart transplant, and has to get “unhealthier,” if that makes sense.

“As they said, there’ll always be somebody that needs a heart more than you,” Lindstrom said.

However, as his condition deteriorates, he will forge on until his time for a transplant comes.

“But I’m going to use every last ounce I have until it’s time,” Lindstrom said.

Lindstrom wonders if he can run in the Leadville Race Series this year in Colorado.

He plans to run in all five races through the summer, which include a trail marathon, 50- and 100-mile mountain bike races, and 10K and 100-mile runs.

“It’s important only because I’d hate to end my running career not on my terms,” Lindstrom said.

What should help him, regardless of his precarious heart condition, is his physical fitness, even though he acknowledged running can be “slow and ugly” some days.

He continues to run every day, tallying 25 to 30 miles a week if things go well, and fits in a lot of bicycling as well.

All of this activity can leave him confused.

Assuming he gets a transplant, Lindstrom said he’s been told he could expect to live about 12 years following the operation.

If he doesn’t get a transplant, his life expectancy is much shorter; at the Cleveland Clinic in December, he was told it was within 18 months.

That could change a person’s outlook on life.

“That part to me is hard to think about — all the stuff that I haven’t done and I want to do, but it would be nice to put a bookend to this long running career,” Lindstrom said.

He was adopted by his parents, Joanne and Greg Lindstrom of Marquette, when he was 16.

She said her son decided to take part in a Mother’s Day race around the Marquette Mall many years ago. As the race went on, she heard someone say, “Here comes the first runner. It’s a big tall skinny guy.”

That guy was her son, who then was told by the MSHS track coach to show up for the track and field team.

“Running gave him a whole set of friends, good kids who were good students, and it just saved his whole high school time,” Joanne Lindstrom said.

As any good mother would, she worries about his heart condition.

“He seems to be coping,” she said.

Lindstrom wants people to take away a few things from his challenges: to stay fit and keep people who need organs in mind.

“I sure hope everybody’s an organ donor,” he said.

He keeps a blog of his activities at 100marathons.blogspot.com, which, according to Lindstrom, has had nearly 14,000 views.