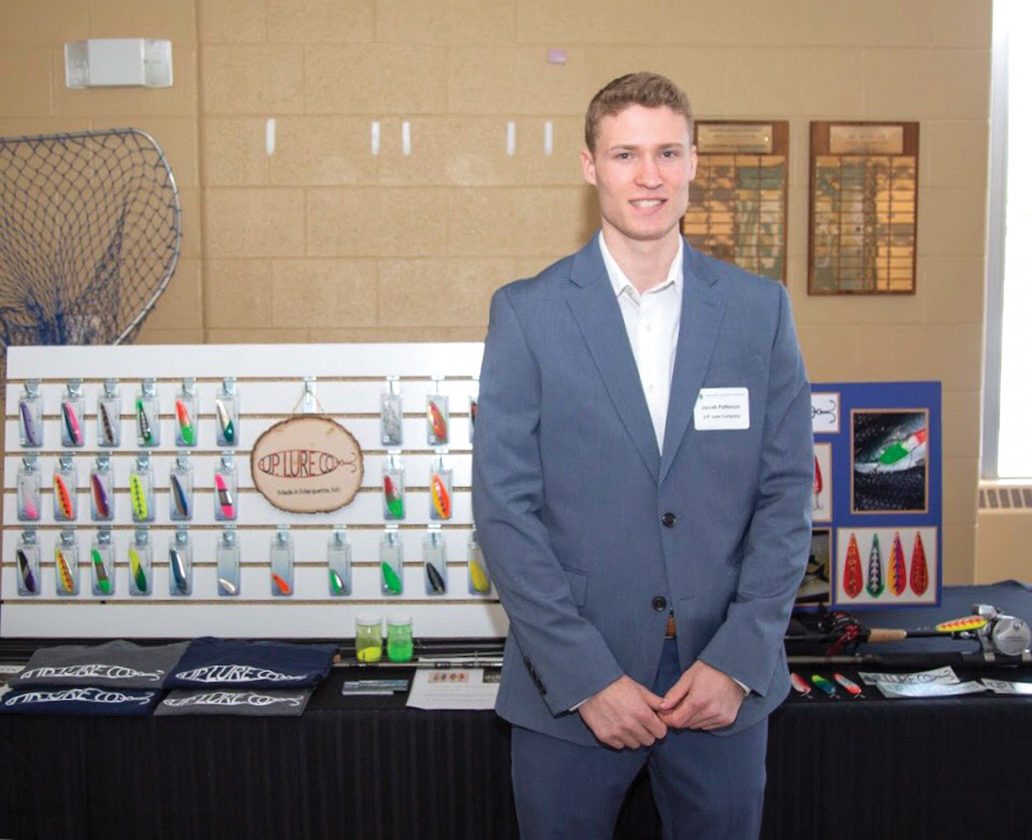 Jacob Patterson, a student at Northern Michigan University, stands by his display about his company, the U.P. Lure Company, during the recent New Business Venture Competition at NMU. His display won the trade fair part of the event. (Photo courtesy of Jacob Patterson)

A spoon is an oblong lure, usually made of metal, that’s shaped like the bowl of a spoon and is intended to mimic a swimming or injured baitfish, thereby attracting a predatory fish.

“It started from a love of fishing,” Patterson said of his company. “I’ve been fishing my whole life.”

Making lures was a hobby at first, but then it became more of a business.

But as with many successful businesses, it needed a hook, so to speak. So, Patterson created premium, high-quality lures at a reasonable price.

“I powder-coat each one individually, which is anti-chip-and-scratch paint,” he said of his nickel-plated lures. “So, they’re built to last, which is one of the biggest things about them compared to other companies or other competitors.”

Patterson obtained his LLC, or limited liability company, designation in June, and about a month later, got his classic trolling spoons into the Bobber Shop LLC, 1320 S. Front St., Marquette, which he noted was the first store to give the spoons a shot.

Patterson also has expanded his line of spoons and stores where they are sold. His casting spoons can be purchased at Gwinn Bait & Tackle, 56 Billings St., while his wobbling casting spoons are available at Superior Outfitters Marquette, 209 S. Front St.

Patterson’s trout spinners can be purchased through the U.P. Lure Company’s Facebook page, along with all the lures. Apparel also will available for purchase soon, he said.

Of course, Patterson wouldn’t be making the spoons if they weren’t successful.

Patterson said he and a buddy were fishing on a lake with them, and he thought, “They’re lasting. This powder coat is working, and they’re catching fish, so I might as well try to make a couple bucks off of it.”

Now he just has to market the lures.

Patterson got off to a good start by competing in the March 28 New Business Venture Competition at Northern Michigan University, which involves students vying for cash and consulting packages to pursue their business plans.

The competition involved two activities: a trade fair where finalists showcased their prototypes of materials and gave a presentation to the judges, and the closing event, The Big Pitch, in which they presented their ideas through speeches and videos to the judges and an audience, and then answered questions from the judging panel.

Patterson won $500 by taking first in the trade fair competition.

Although many anglers want to use artificial lures such as spoons, other times, they want something live that moves on the ends of their books.

Live bait is the specialty at the Bobber Shop, which is more than just a place to buy artificial fishing lures from the U.P. Lure Company and other places.

Chris Schroeder, along with his wife Michelle, owns the shop, which opened on Black Friday 2017.

“We really try to push the live bait,” Schroeder said. “We have more of a live bait selection than anybody around that I know of.”

The shop, he said, has 13 different minnow selections as well as spikes, wax worms, wigglers, nightcrawlers, spawn and loose eggs.

“We really try to be an actual bait shop,” said Schroeder, who noted one of its worm offerings are Nitros — green-dyed nightcrawlers that are good for walleye and trout anglers.

The store also sells beaver tails, which Schroeder said are as fat as nightcrawlers but only half as long.