The American toad is abundant throughout the Upper Peninsula. The species also is tolerant of disturbance. (Photo courtesy of Ryne Rutherford)

The snapping turtle is the largest reptile found in the Upper Peninsula. Pictured is a baby snapper. (Photo courtesy of Ryne Rutherford)

This is a mass of wood frog eggs. Wood frogs are among the first frog species heard calling in the spring. (Photo courtesy of Ryne Rutherford) 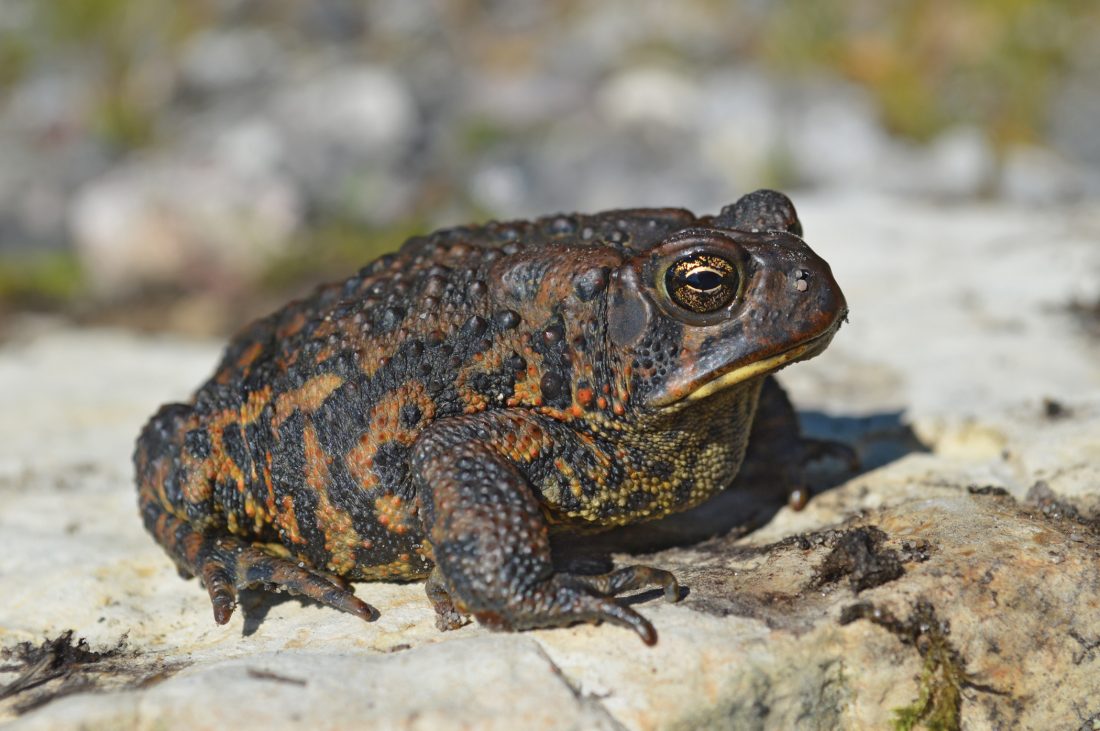 The American toad is abundant throughout the Upper Peninsula. The species also is tolerant of disturbance. (Photo courtesy of Ryne Rutherford)

MARQUETTE — Climate change and other factors might have an effect on the types of reptiles and amphibians found in the Upper Peninsula, if they haven’t already.

Ryne Rutherford, a Northern Michigan University graduate and independent biologist who runs Biophilia LLC, talked about the “Biogeography and Natural History of the U.P.’s Amphibians and Reptiles” on Saturday at the Celebrate the UP! event, put on by the Upper Peninsula Environmental Coalition.

Rutherford gave his presentation at the Landmark Inn, but his studies and involvement in a project concerning reptiles and amphibians have kept him in the outdoors a good deal of the time, especially in the U.P., which he noted has a homogenous landscape.

“You can go 350 miles from the eastern U.P. to the western U.P., and maybe the plant species share 80 or 90% in common with each other,” Rutherford said, “and this might be our only chance to determine distribution for great changes from climate change that occur.”

He said the unique habitats special to the U.P. include rock pools, such as those on Isle Royale that are home to boreal chorus frogs and other species; coastal wetlands, particularly along Lakes Michigan and Huron; and the Huron Mountains. 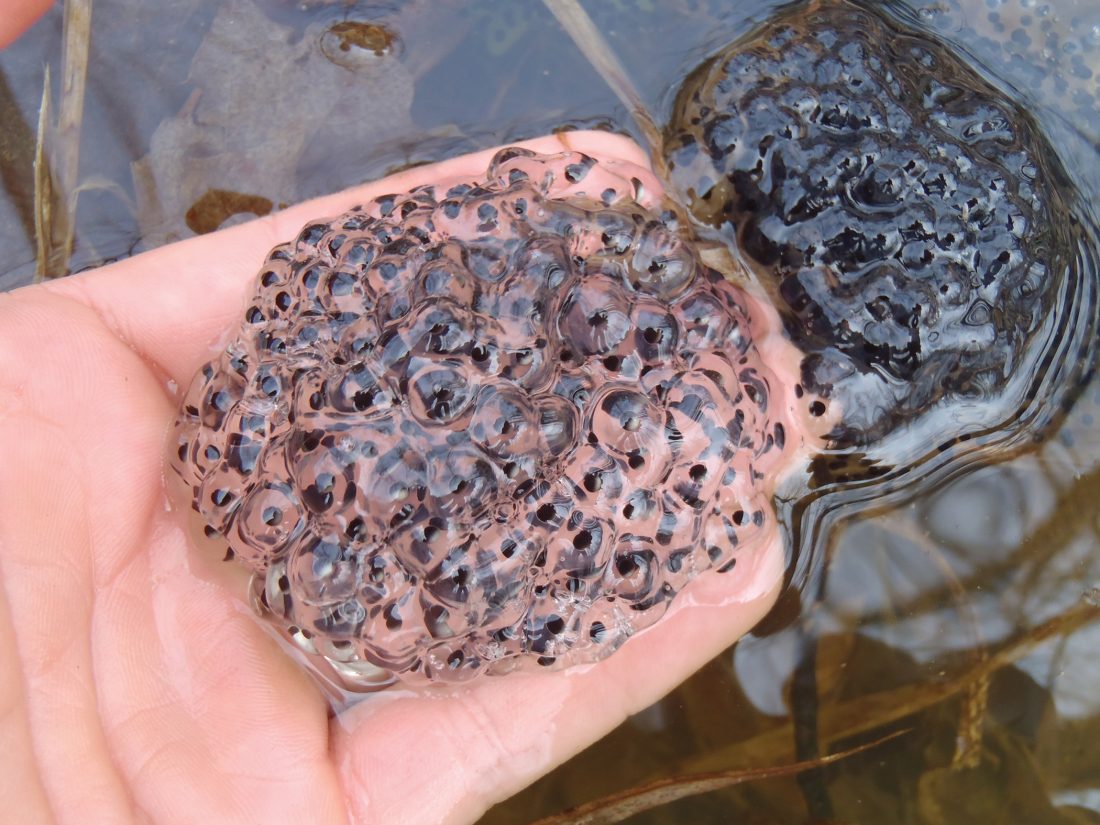 This is a mass of wood frog eggs. Wood frogs are among the first frog species heard calling in the spring. (Photo courtesy of Ryne Rutherford)

The top goal for the project, he said, is to determine the species that have been verified in the U.P. and their baseline distribution. The plan then is to explain patterns seen in biogeography.

The work is based on 15 years of research conducted in partnership with various agencies and Gary Casper, Ph.D., of the Field Station Department at the University of Wisconsin-Milwaukee, he said. Rutherford’s wife Jenny also has helped with the project, whose research methods are varied, including museum visits and results from citizen science efforts such as the annual frog and toad survey conducted by the Michigan Department of Natural Resources.

Other field methods include minnow trapping for newts, quarter-inch plywood boards to attract snakes, calling surveys for frogs and hoop-net traps for turtles.

It might not be true scientific research, though, without a little danger.

“It can be difficult to pry large snapping turtles out of the netting without getting bit,” Rutherford said. “We’ve had plenty of experience doing that.” 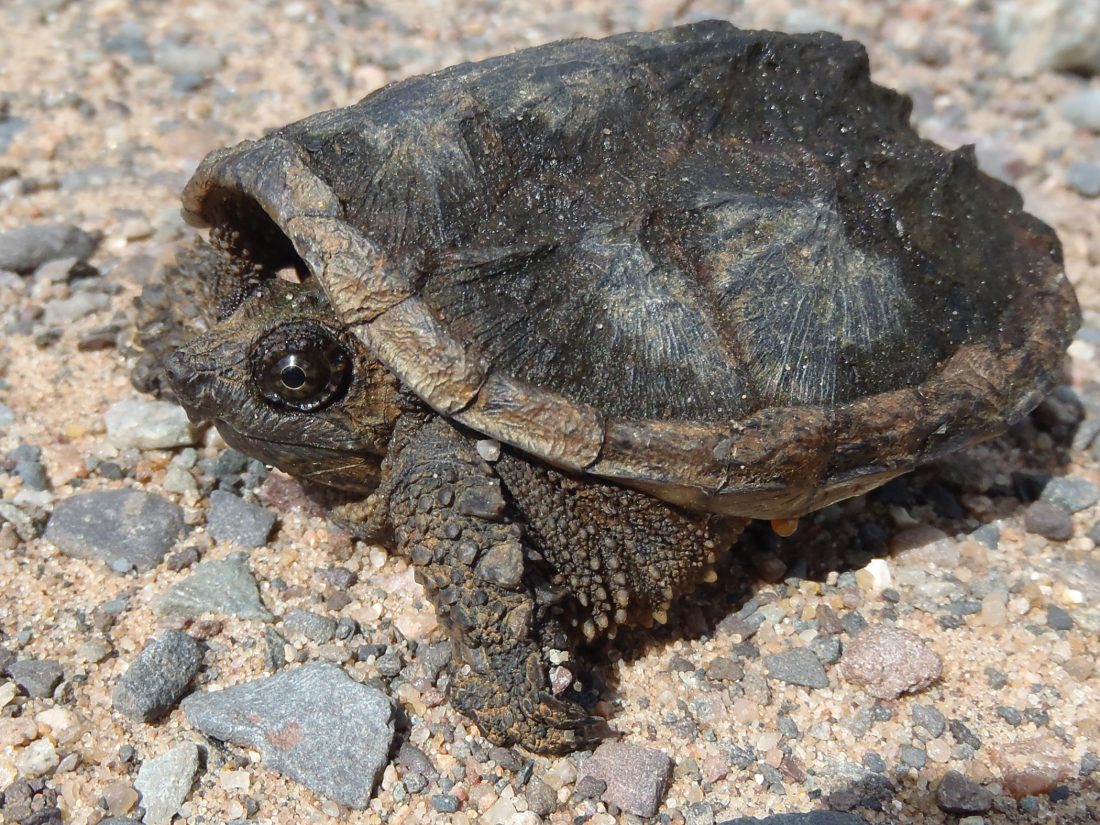 The snapping turtle is the largest reptile found in the Upper Peninsula. Pictured is a baby snapper. (Photo courtesy of Ryne Rutherford)

Researchers have established there are 20 reptile species and 17 amphibian species, which he noted represents three-quarters of all the species in Michigan and Wisconsin.

A few new species have been added for the U.P., Rutherford said, including the boreal chorus frog, which previously had been found only on Isle Royale but recently was detected in several mainland counties. One sighting of a red-eared slider was recorded, while the blue racer was taken off the list because of the lack of verified records. Also, the pickerel frog, eastern tiger salamander and queen snake probably are extirpated from the state.

“It’s interesting, looking at the biogeography on the scale of the U.P., because local climate is so heavily influenced from the Great Lakes,” Rutherford said. “Even though the habitats might look the same, the minimum winter temperature can be very different over a distance of only, maybe, 10 to 20 miles, and has profound effects on herp distribution as well.”

Some reptiles and amphibians are common locally, and if not seen, can be heard easily in their habitats.

However, Rutherford said the most common frog, the green frog, often is misidentified because of its color variability, but is disturbance-tolerant and therefore abundant.

Much less common, he said, is the mink frog, more common in the colder parts of the U.P. than the coastline. The U.P. also is at its southern range limit and is of special concern in Michigan.

“This is probably the species that we have that will be most severely impacted by climate change,” Rutherford said.

The northern leopard frog has largely disappeared from Marquette County — Rutherford isn’t sure why — but the species can be found in other areas of the U.P.

“If you want to hear them, they’re around mile marker 56 along the wildlife drive in the sedge meadows,” Rutherford said.

He believes more surveys need to be done on the mudpuppy — common only around the Bays de Noc region in Delta County — whose numbers have declined because of lampricide treatment.

Many people might not realize Michigan has a lizard — the five-lined skink — which Rutherford said is found in the Huron Mountains region and in Menominee County, usually in sandy, open dunescapes with abundant driftwood.

A record of the Blanding’s turtle recently was verified in Delta County, he said.

“They’re more common to the south, so presumably as the climate gets warmer, there’s enough suitable habitat that these guys could increase in abundance,” Rutherford said.

Other species that might find their way to the U.P because of a warmer, drier climate, he said, include the spiny softshell turtle and the northern prairie skink.

Acknowledging the project is mostly self-funded, Rutherford said future needs including funding to process a backlog of data, a book and more surveys where new species could be found.

Rutherford said people who want to help reptiles and amphibians can visit inaturalist.org and look up the U.P. Herp Survey.

A little education can’t hurt either.

For instance, one of the audience members for Saturday’s program was Doug Welker of Alston, who was intrigued about herpetological movements from one region to another.

“How do these things move around?” he asked after the talk.