Making the best of the ‘winteriest winter’ 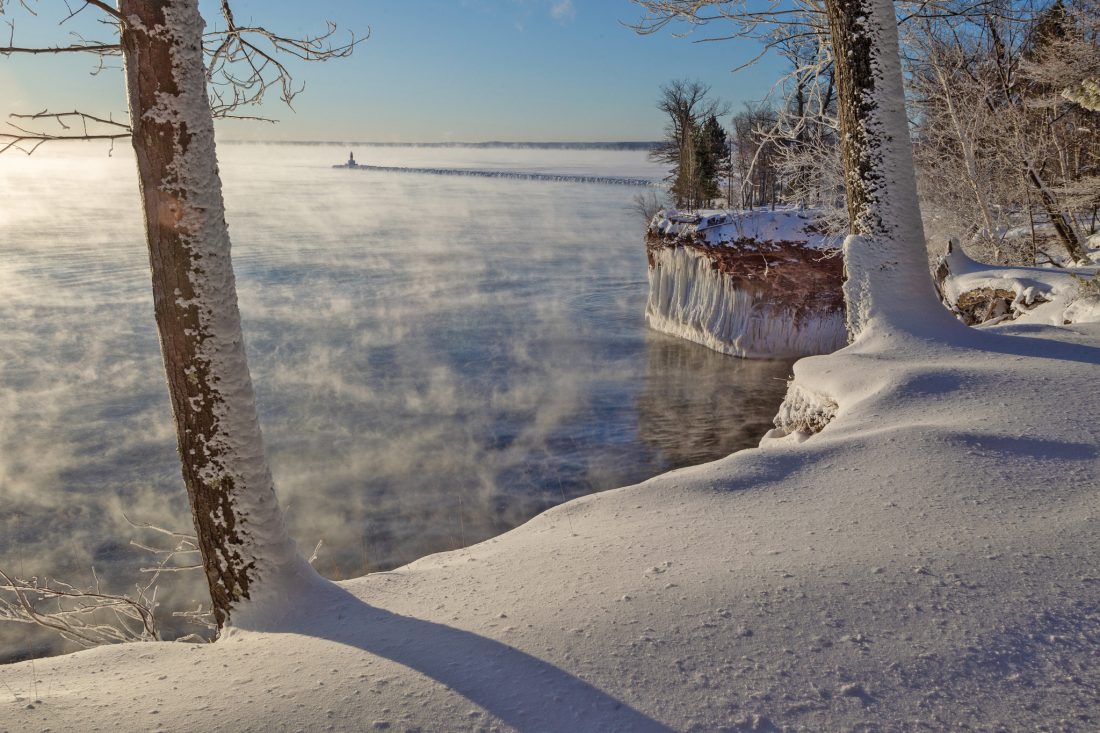 This is one of the sunrises Justin “Bugsy” Sailor photographed during his ongoing sunrise project. This sunrise picture was taken at Presque Isle Park. Sailor has undertaken a few unique winter-related projects this season, which has presented challenges to local residents in the form of lots of snow, ice and subzero temperatures. (Photo courtesy of Bugsy Sailor)

MARQUETTE — Some people deal with winter by shoveling snow and plowing driveways as the need arises, and simply getting through the rest of the season.

Others have more fun with it, taking to the woods to cross-country ski or snowshoe.

Then there’s Justin Sailor of Marquette, more commonly known as Bugsy, who owns the Upper Peninsula Supply Co., a “purveyor” of U.P.-related goods along Washington Street in downtown Marquette. He’s also been involved in such local events as the Fresh Coast Film Festival and Plaidurday.

He takes living in a U.P. winter to a new level, looking at the season from a creative and sometimes irreverent viewpoint as is evident by his posts on Facebook, which he shares on his company’s page. He also has his own website at bugsy.me.

Sailor posted photographs of all 28 February sunrises this year “during the most wintery of the winters,” listing the “highlights” — or lowlights, depending on how you look at it — of the project: falling through the ice, once; the number of sunrises where the sun actually was visible, eight; nearly doubling the average number of steps he took daily; and engaging in conversation with people while taking a photograph with them in it. 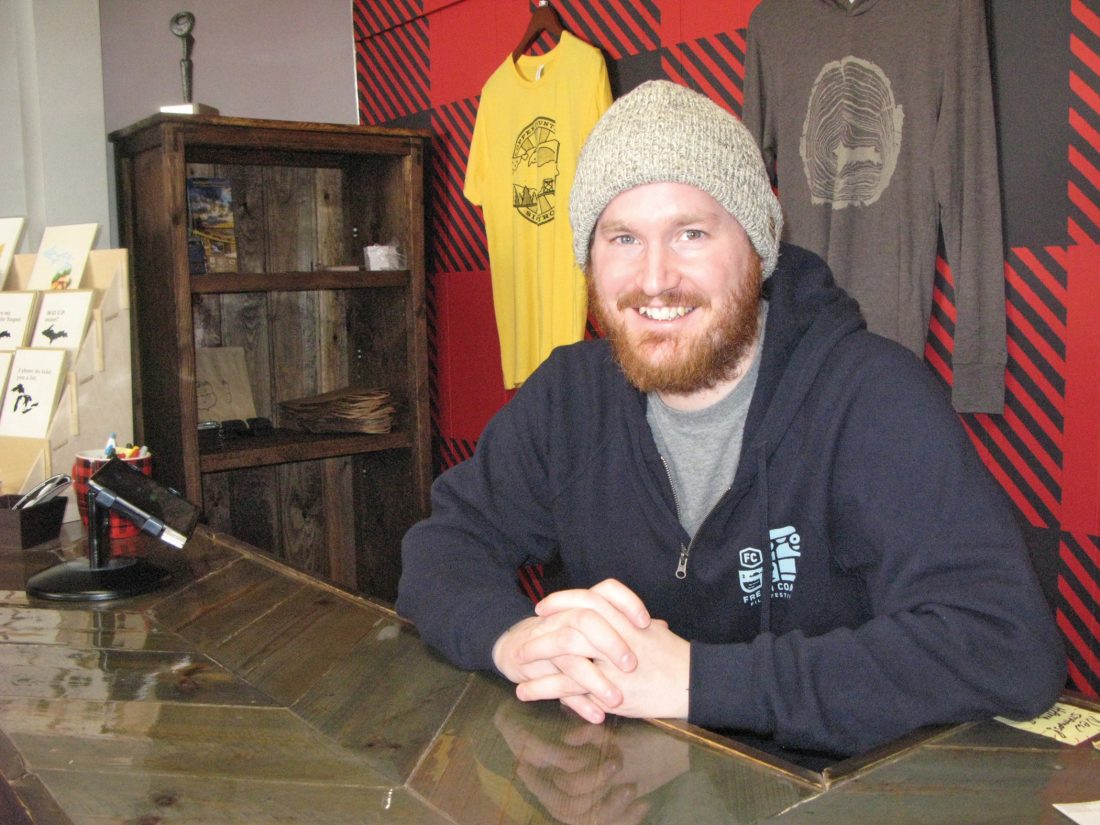 “It has likely been the winteriest winter of my adult life (of course many of those were spent in Lansing and not the Upper Peninsula),” Sailor posted. “From windchills in the -20s, multiple double-digit snowstorms, an ice storm, and the snowiest winter Marquette has experienced in over a decade. It’s magical.”

On Feb. 25, however, he made a post about his endeavor to find out how long it would take to resurface Lake Superior with a single Zamboni.

Most of the lake then was covered in ice, as it is now.

“Here at U.P. Supply Co, we ask the important questions,” he wrote.

However, it was important — or at least interesting — enough for MLive.com, a well-read news source based downstate, to pick up the post and write an article on it. The Detroit Free Press and other media outlets picked it up as well.

≤ During a single resurfacing, a Zamboni machine travels approximately three-quarters of a mile.

“In all, that means it would take approximately 693 years to resurface Lake Superior in its entirety,” Sailor wrote. “The ice resurfacer will have driven approximately 39,015,384 miles.”

However, he stressed these calculations do not take other factors into account. For example, you’re going to have to add in shift changes, coffee breaks, maintenance and, of course, some pick-up hockey games.

“Want to resurface Mother Superior over the course of a 20-minute intermission so everyone else can get another beer and stadium nachos?” he asked. “Not a problem.”

Someone would need only about 18,207,179 Zamboni machines and drivers operating at once.

“So if you start today, well, you might be able to make it to April before she breaks through the ice,” he said. “As for the entire Great Lakes? Well, that’s the equivalent of 154,666,667 ice rinks.”

Some Facebook readers mentioned other factors, such as refilling the Zamboni water and the width of the blade.

Sailor acknowledged, though, he didn’t get into that much detail.

It was a fun read anyway, or at least many readers thought so.

Here’s a sampling of the comments:

≤ “As a former Zamboni driver, I offer my services. I would prefer to work on the Duluth-Superior end of the lake.”

Most likely, no one will actually test the Zamboni math.

“It’s a lot to account for,” Sailor said in an interview with The Mining Journal at his store.

However, the sun will continue to rise every morning, except on the day after the apocalypse, and Sailor plans to photograph each sunrise, although his shooting locations probably are limited in the foreseeable future.

“Only so much is accessible now with all the snow,” Sailor said.

Not that a lot of snow is a big issue for him.

“I’ve always enjoyed inclement weather,” he said. “I think I get that from my mom, but I’m here, and I choose to be here, so I choose to enjoy it.”

This can be a challenge. While taking a sunrise photo, Sailor was on top of Sugarloaf Mountain during a morning with a minus 30 wind chill factor.

“I think it’s good for the soul,” he said. “It wakes you up and I think it makes your hot chocolate taste a lot better once you experience it.”

Eventually — sometime in the near or distant future — the snow will melt and Sailor will have to focus on warm-weather outdoor pursuits. One likely will be skimming rocks across the surface of a lake since he is an accomplished skipper of stones.

In fact, he will give a talk about the “ephemeral qualities” of stone skipping at TEDxNMU 2019: Diving Deeper, which features people giving short speeches on a variety of subjects, scheduled for 1 to 8 p.m. Saturday at Forest Roberts Theatre at Northern Michigan University.

In the meantime, Sailor will continue to enjoy the Marquette winter in a unique way, even though he lives without what many people consider winter necessities: a four-wheel drive, snow blower, automatic starter and even a garage.

“I don’t have all the winter toys, but I’ve got my two feet and a camera and I make use of those,” Sailor said.

This is one of the sunrises Justin “Bugsy” Sailor photographed during his ongoing sunrise project. This sunrise picture was taken at Presque Isle Park. Sailor has undertaken a few unique winter-related projects this season, which has presented challenges to local residents in the form of lots of snow, ice and subzero temperatures. (Photo courtesy of Bugsy Sailor)