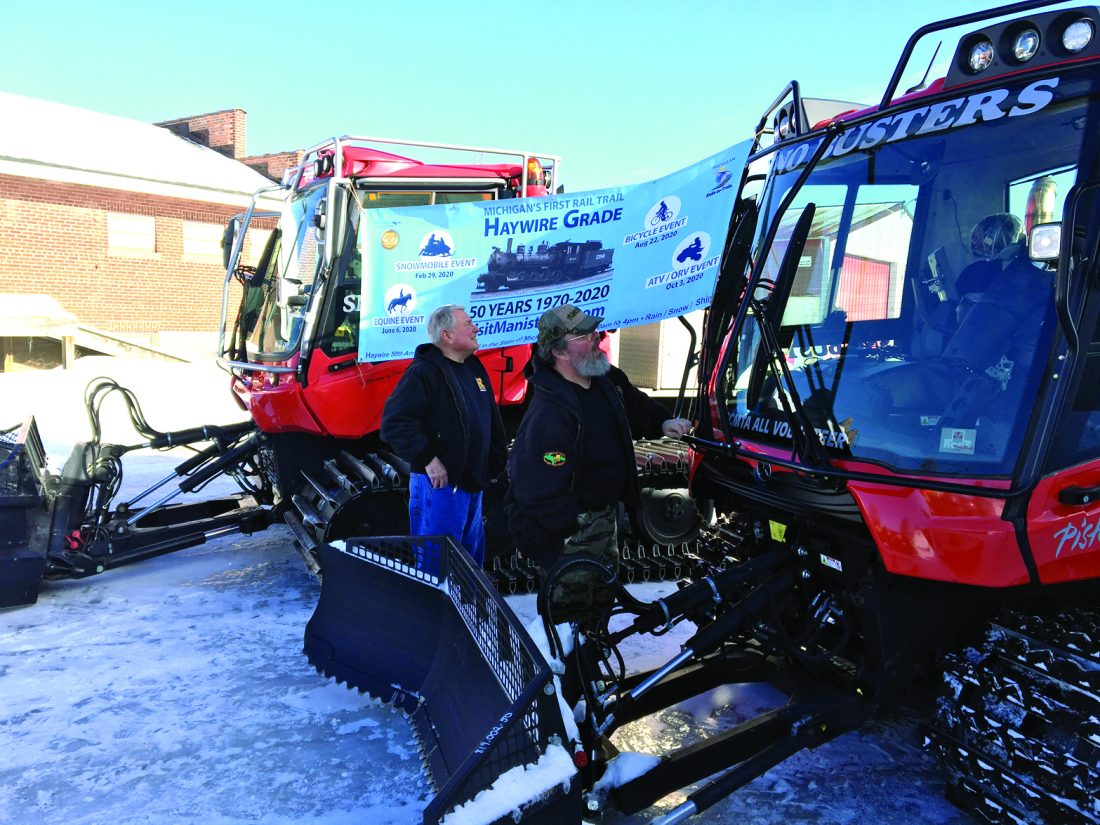 Some residents who live near the Haywire Grade, a multi-use trail that crosses the Upper Peninsula north to south from Shingleton to Manistique, are glad the trail is getting the recognition it deserves.

“I’d say over the past four years, Michigan has truly started to recognize the significance of the Haywire,” said Gerry Reese, who has owned property near the trail for nearly 30 years and is a part of the Schoolcraft County Motorized Trail Association.

A yearlong celebration of the Haywire Grade kicked off in February with a snowmobile ride and will continue throughout the year with equine, ORV/ATV and bicycle events as local, regional and state officials commemorate the trail’s history.

The celebration of the Haywire rail trail has been in the making for five years.

“There are a lot of partners that picked up the pieces of this project and a lot of people who have come together for this,” Reese said. “There are still some residents in the area who are unaware of the trail’s rich history. We want to change that.”

With more than 2,600 miles logged, Michigan has converted more miles of abandoned railroad corridor into trails than any other state. This conversion is done through a process called rail banking. The trails, some paved and some not, are used for recreation purposes, but may be recalled to railroad service and the recreation trails rerouted should the need arise.

The first rail-trail in Michigan was the Haywire Grade in Schoolcraft and Alger counties.

Established in 1970, two years after the Manistique and Lake Superior Railroad ceased operation, the Haywire Grade runs 32 miles. Originally planned for seasonal snowmobile use, the Haywire has since become a popular year-round multi-use trail.

“People have long used the trail for a variety of activities,” Reese said. “It was very common to see an equestrian rider, and at the same time someone walking. It’s truly a multi-use trail.”

The railroad served the logging industry and fostered settlement in the region. Many of the trees harvested from the area were sent to Illinois to help rebuild after the Great Chicago Fire.

Stories like this are being permanently memorialized through a series of 11 historical interpretive kiosks that will be installed along the trail as a part of the golden anniversary celebration.

“We want the Haywire Grade’s 50th anniversary to acknowledge and celebrate this important milestone for Michigan’s trail network, and at the same time help trail users interact with the heritage of this beautiful area for years to come,” said Dan Spegel, Michigan’s heritage trail coordinator.

The kiosks themselves are part of that history, as they were fabricated with steel from Upper Peninsula railroad tracks and cedar logs grown in the region. Each kiosk also contains metal art depicting a train engine and Manistique and Lake Superior railroad cars.

“We designed the kiosks to have that rustic flavor, but also the railroad and the logging camp flavor,” Reese said.

As Michigan’s heritage trail coordinator, Spegel works on projects like this one to help shed light on some amazing history around Michigan’s 13,000 miles of state-designated trails.

Since 2015, the Michigan Department of Natural Resources’ Michigan History Center has helped communities around the state create a deeper sense and experience of “place” for trail users through its Heritage Trails Program.

“Heritage trails connect people with the natural and cultural heritage of the landscape they are passing through,” Spegel said.

The first was a snowmobiling event held Feb. 29. Spegel said starting off with a snowmobile ride was fitting since that’s how the trail began.

“The 50th anniversary snowmobile ride was a celebration of the Haywire Grade’s significance to Michigan’s trail network,” Spegel said.

The event kicked off at the Schoolcraft County Motorized Trail Association clubhouse with refreshments and presentations by DNR representatives. Participants then rode the freshly groomed trail about 15 miles from Manistique to the Jack Pine Lodge, where they stopped for lunch. Riders received a commemorative patch marking their participation in the event.

In addition to the DNR and Schoolcraft County Motorized Trail Association, other trail partners that helped make the Haywire Grade celebration events possible include the city of Manistique, the Hiawatha National Forest, the Schoolcraft County Historical Society, the area’s tourist council and several private donors.

In February, the Haywire Grade reached another significant milestone when it was designated one of three new Pure Michigan Trails.

According to Pure Michigan officials, designated Pure Michigan Trails provide access to national, state or regional scenic resources of high quality and splendor, and articulate the natural essence of Michigan.

“Michigan is known for having thousands of miles of hiking, biking and kayaking trails, but the trails and communities that receive this designation are truly outstanding and embody what Pure Michigan is all about,” said David Lorenz, vice president of Travel Michigan. “We are pleased to partner with the Michigan Department of Natural Resources to honor these trails and trail towns.”

To qualify as one of the trails, routes may be a single trail or combination of trails and must be more than a mile in length, open to the public and substantially completed.

The trails and towns receiving Pure Michigan designations comprise some of the elite Michigan trail experiences. They promote healthy lifestyles, conserve natural and cultural resources in the area, display iconic signage, increase awareness of trails for tourism and provide a catalyst for economic activity in their associated communities.

Reese said the Pure Michigan designation, scheduled commemorative events and recognition the Haywire Grade is receiving are great for the region and the state.

“It’s exciting for everybody,” he said. “This has been building momentum for years.”

For more on the Haywire Grade celebration and background, go to VisitManistique.com.