Caring for the crag 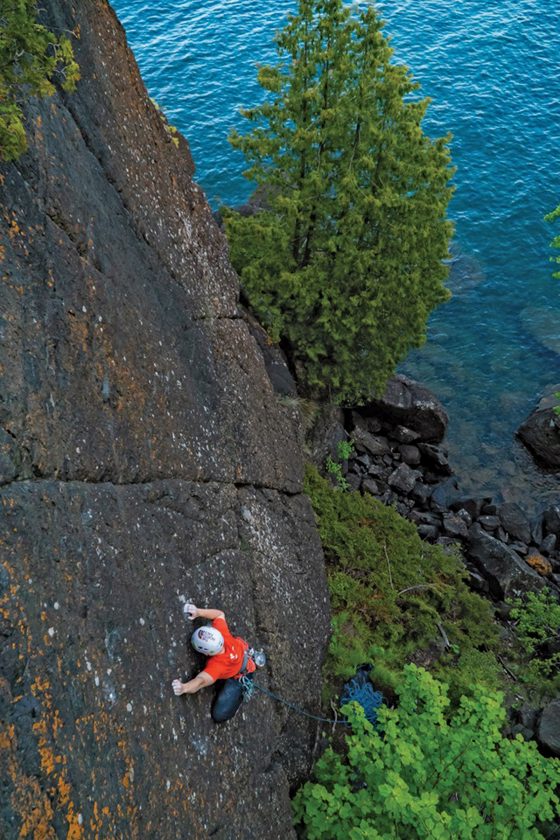 Brandon Caltrider, president of the South Superior Climbing Club, takes in a climb at Presque Isle Park in Marquette. He is spearheading Saturday’s Adopt-A-Crag at Slugg’s Bluff in Palmer. (Photo courtesy of Andrew Broadhead)

MARQUETTE — Slugg’s Bluff sounds like the name of a 1960s-era Clint Eastwood movie, but it’s actually the site of a local weekend conservation project.

Northern Michigan University student Brandon Caltrider, a junior studying biology and president of the NMU-based South Superior Climbing Club, is spearheading an Adopt-A-Crag CleanUp for Saturday at the climbing spot in Palmer.

Climbers and non-climbers alike are invited to show up at 9:30 a.m. at the Physical Education Instructional Facility at NMU for the drive to Slugg’s Bluff.

Hosting Adopt-A-Crag, Caltrider said, is the Upper Peninsula Climbers Coalition, of which he is a board member, with help coming from the NMU EcoReps, National CleanUP Day and the Access Fund.

“Crag” refers to the actual climbing area — a rock outcropping, he said.

Caltrider compared Slugg’s Bluff with a popular spot at Presque Isle Park, Sunset Point. However, the Palmer climbing spot entails a view of the now-closed Empire Mine, mixing natural beauty with the effects of industry.

“It’s a really nice overlook, beautiful view,” Caltrider said. “We got the mine to the right. You got a tailings pile to the left. You can see a lot of what the mine has done, and it kind of looks gross in a couple of spots.”

From what he understood, climbers previously removed a lot of trash, such as an entire car body and toilets, from the site. However, it was an unsanctioned clean-up.

The Adopt-A-Crag event, on the other hand, is organized, and is expected to involve many young people.

“All these people want volunteering opportunities,” Caltrider said. “They want to build their resumes. They want to explore. That’s part of my angle and what I brought to it.”

For example, he noted NMU EcoReps will supply gloves and a group of volunteers.

A Slugg’s Bluff volunteer doesn’t need expert climbing skills, however, to take part in Saturday’s event, although actually ascending or descending it probably requires some know-how.

The site is described at www.upperpeninsulaclimbing.com as “some of the best face and crack climbing in the Upper Peninsula.”

The website reads: “Most of the climbs follow cracks, but there are a few jams and often you will be face climbing with traditional gear.”

Caltrider said Slugg’s Bluff is composed of quartzite and is about 50 to 60 feet high.

At a recreational level, Caltrider said the level of climbing at Slugg’s Bluff is moderate to advanced.

“That has a lot to do with the style of climbing that they do there,” he said. “It’s old school style where you’re placing gear as you go.

“Modern style would be top rope or sport climbing.”

Whatever type of style a climber chooses, it’s likely a scenic and safe experience is preferred over a trashy and dangerous one.

“As far as we can tell, there’s not a whole lot that needs to be done with trash clean-up,” he said. “It’s more of a trail-building day.”

Caltrider said efforts will involve erosion preventive maintenance on the trails so climbers can get to the bottom.

To get an idea of what volunteers will handle on Saturday, he said to imagine a slope.

“We’re going to be pulling rocks from up here and putting them down here so it creates a little table surface,” Caltrider said. “That’s kind of the goal.”

The plan too is to remove glass, such as window panes and beer bottles, as well as some of the brush at the top to improve the view.

Specifically, volunteers will re-mark and re-establish a trail that used to exist when there was more traffic there with climbers, he noted.

“When the public pulls up on their ATV, they see, ‘Oh, I can actually walk down here, and I can go over and take in the view. I can come up to the edge safely and I see this beautiful view,'” Caltrider said.

This view might make a person wonder why a person is compelled to smash glass at such an area.

“When you’ve had a couple to drink and you’re cruising around in your ATV, there’s nothing better than just hucking a beer bottle and hearing it go ‘boom,'” Caltrider said.

Caltrider said a goal for the event is to offer non-climbing students, since it’s the beginning of the NMU semester, the opportunity to go to a climbing area without the pressure of a climbing event.

“A conservation event is branded much better than just purely climbing,” he said. “It’s a little less intimidating, a little more soft on the edges, and draws in a wider audience.”

Fortunately, the campus climbing club is varied in scope.

“We are an outdoor recreation club, and we try and promote inclusion and access to people,” Caltrider said. “I’m going to be doing a presentation at Jacobetti Home for Veterans on rock climbing for paraplegic people and people with just all sorts of physical disabilities that we can overcome, and there’s ways to do it in climbing with specific gear.”

Club members also are environmentally conscious and want to mitigate their impact, he said.

In fact, it also could mean improving a recreational destination while providing a bonding and skill-building experience for the volunteers.

“If we make this area more accessible, it’s just a home where our community can kind of come together,” Caltrider said.

He believes the Adopt-A-Crag events, which are a national series, can take place elsewhere.

“It’s definitely demonstrating something that is going to happen hopefully in the future at other climbing areas that are in a little bit more dire need,” Caltrider said.

For more information on the South Superior Climbing Club, which hosts education and outreach events, visit the group on Facebook.