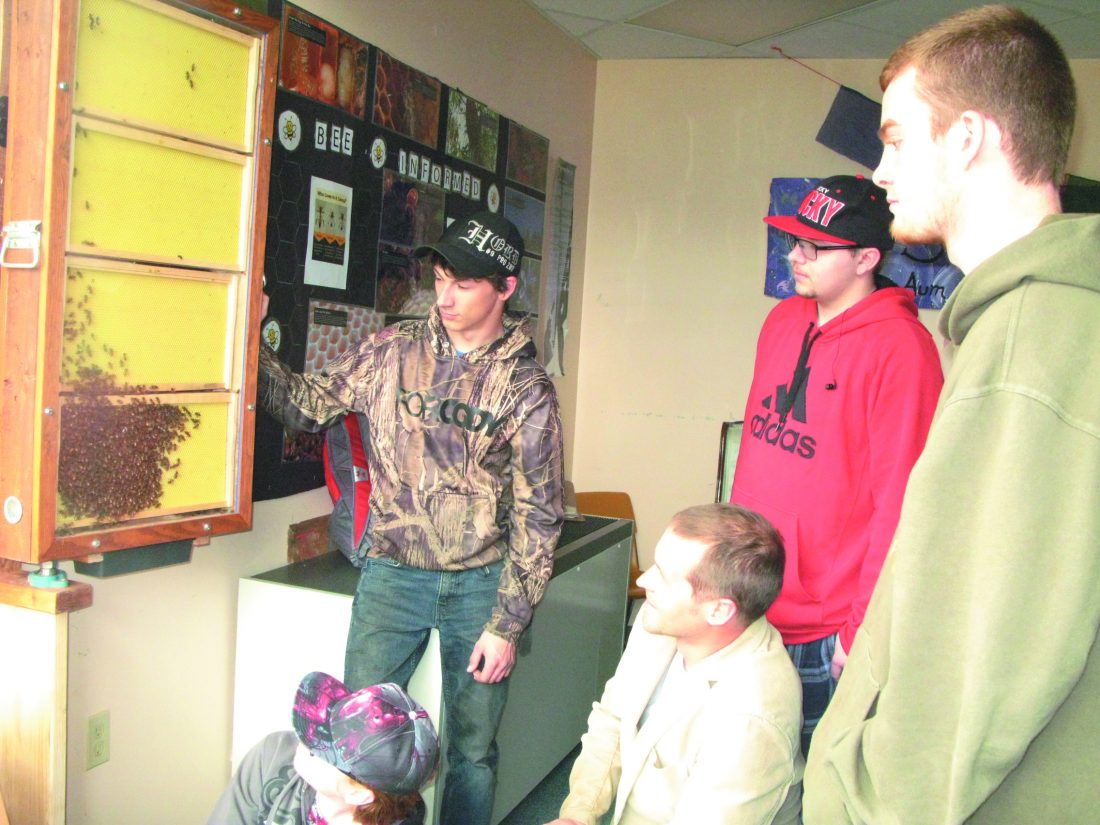 It was an unusual way to spend part of their afternoon — trying to find a unique insect for a project that could lead to the school becoming more of a focal point for the Trowbridge Park community, especially if it attracts more honeybees to the area.

Brian Prill, a career/college readiness teacher at MAHS, oversaw the project that brought the working bee hive to the school under a $300 grant from the Whole Kids Foundation’s Bee Cause Project, whose purpose is to promote local apiaries to help the U.S. honeybee population.

“They say that small apiaries are going to keep the honeybee alive,” Prill said. “That’s the only thing that’s going to do it. The big, large-scale agricultural ones — that’s where the most colony collapse disorder is happening.”

The MAHS hive panel comes with a passageway that allows the bees to come and go.

“They’ll live in here year-round and give the students a chance to kind of study bees and see them as you would inside a hive,” Prill said.

The long-term plan is to turn the outside area by the hive into a pollinator garden and put in walking paths around the school.

The hive’s main purpose, though, isn’t about making honey. Instead, it’s mostly an observational hive.

The project also has an educational aspect to it, with one wall of the room where it’s situated containing information on bees in general.

≤ The queen’s job is to lay eggs and preside over the hive.

≤ The worker bees, which are females, collect food and water, care for the larvae and guard the hive.

≤ The drones, which are males, don’t have stingers. Instead, they mate with the queen once, and then fly off and die.

Prill said the hive will allow students to explore the correlations between a bee colony and a school and how the bees, like students, are all connected — and everyone has a part to play.

The bee colony represents not only an ecological connection but a way for students to learn about the world of grants.

Dayton Benish, an MAHS junior, helped write the grant proposal for the project.

“I’m really pumped that my words achieved this,” Benish said. “Just taking an hour of my time made all this happen, and that’s amazing, and that’s going to stay here for generations to come, hopefully.”

There’s also little maintenance involved with the hive, unless you’re a honeybee.

“They’re great housekeepers,” Prill said. “They can maintain this hive, which is awesome. It’s kind of fun to watch them interact. They communicate with each other. They all know where the queen is by her pheromones, and they’ll follow her around everywhere.”

As the hive grows, he said the hope is that new queens, which will go out into the community and make more hives, will be created.

Making it through the harsh Upper Peninsula shouldn’t be a problem.

“They’ll have enough honey stored in here to eat their own honey stores, and hopefully, be alive come spring,” Prill said.

This is when colony collapse disorder has been a concern, with bees overwintering and then dying, he said.

In this regard, the project gave students a chance to engage in civil action.

Prill noted that two years ago in an MAHS economics class, students wrote the Environmental Protection Agency about protecting bees and banning certain classes of pesticides. The EPA’s response, he said, was there was no connection between colony collapse disorder and pesticides.

The EPA website at epa.gov now indicates theories behind the disorder, which include the invasive varroa mite, changes to habitat where bees forage — and poisoning through pesticides applied to crops or for in-hive insect or mite control.

Whatever the reason, in the meantime, the new MAHS arrivals, which are non-aggressive, are building their honeycombs in the hive, Prill said.

“Since we met a dead end with legislation and the government, we decided to take it in our hands to kind of become part of the solution,” he said.

If nothing else, students can become mesmerized just watching the bees move in the hive, and maybe someday, see them fly into a colorful pollinator garden.

“It’ll be fun to watch it grow,” Prill said.