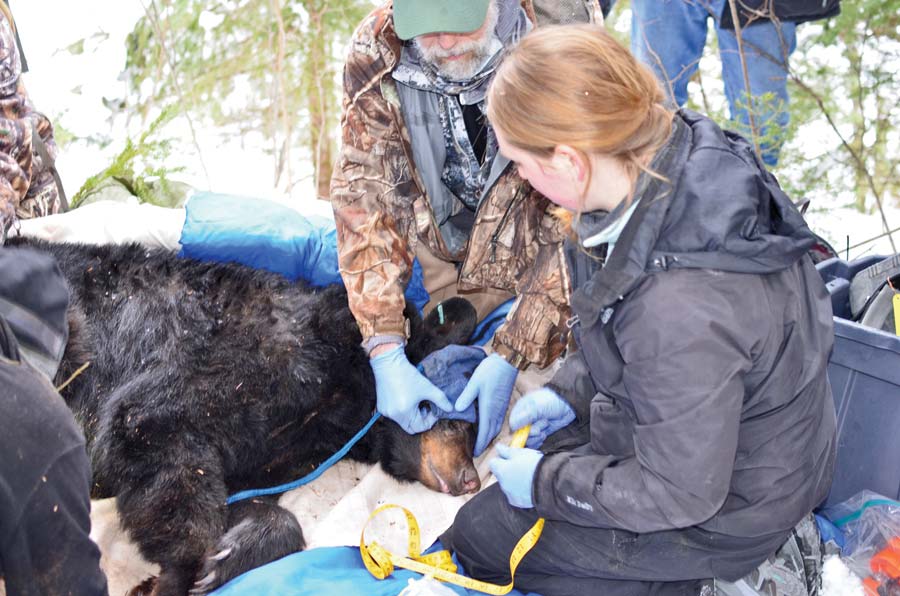 A research team performs a health check on a female black bear outside her den in Houghton County as part of an ongoing predator-prey project. The project was one of several topics discussed Tuesday at a joint meeting of the U.P. Citizens’ Advisory Councils in Marquette Township. (Photo courtesy of the Michigan Department of Natural Resources)

The DNR councils are designed to provide local input to advise the DNR on regional programs and policies, identify ways the department can be more effective and offer guidance from their own experiences.

The annual meeting also serves as a way for the councils to learn about topics like the predator-prey study, which is being undertaken by the DNR and Mississippi State University to look at the roles predation, weather and habitat play simultaneously in deer/fawn survival.

“That actually results in a rather difficult field operation because you’re trying to do many things at one time, but we think it’s important to do that because what it does it allows us to look at the interaction among those factors,” Beyer said.

Those relationships between deer and those factors are not likely to be same from place to place.

What the researchers are trying to accomplish, he said, is capture the range and variability in these relationships by looking at snowfall zones.

They also are trying to estimate the abundance of deer, bears, wolves, coyotes and bobcats in these study areas.

“That’s important because it allows us to be able to extrapolate our results to the population level a little bit easier,” Beyer said.

The study has two perspectives: from deer and from predators.

“We think the two perspectives are complementary,” Beyer said. “From the deer perspective, what we’re doing is we’re trying to estimate the rate of survival of adult does and fawns in the population.”

Then they will try to determine the causes of mortality.

In other words, what is killing the deer?

“Is it predation? Is it disease? Is it starvation because of winter severity?” Beyer asked.

From the predators’ perspective, the focus is on estimating the rate at which individual animals are killing fawns. Once that information is acquired, he said, it can be combined with information on the abundance of predators and deer, giving researchers a better understanding of the potential role of predation by these various species on deer-population growth.

What’s already known is that winter weather is important in determining deer numbers, so that kind of data also is being collected, he said.

For the study, adult does are captured and collared so their survival can be monitored and their causes of death determined.

For a three-year period in a low-snowfall zone, it was found that doe survival averaged 70 percent, Beyer said. In a mid-snowfall zone, only 57 percent survived.

In the zone with less snowfall, coyotes simply outnumbered wolves, he said, but quite a number of livestock carcass dumps on the landscape also were found. Collared wolves foraged heavily on those carcasses, which reduced the predation on does.

However, Beyer said the results aren’t that straightforward since the data reflects only the immediate cause of mortality. Sometimes there are underlying factors.

That adds up to more vulnerability to predation.

“We really have to keep in mind these interactions among the potential limiting factors,” Beyer said. “It’s not as simple as that: ‘It’s always winter or it’s always predators or it’s always habitat.'”

Being confined in deer-wintering complexes also drains their energy resources, he said, plus how long snow is on the ground and snow depth are other weather-related factors.

“You’re going to lose deer in the wintertime,” said Beyer, who noted that after those deer are lost, the survival rate levels off.

However, more work needs to be done.

“We’ve got to replace all those does that we lost before we can build that population back up,” he said.

He also addressed survival of fawns, which like does are captured and collared. Again, it was found that fawn survival was higher in the low-snowfall zone than in the mid-snowfall zone.

The severe winters of 2013-14 resulted in poor survival rates, which surprisingly continued into the milder 2015 winter, he said.

Coyotes were the biggest source of mortality of fawns in both study areas.

However, habitat also had an influence on fawns, with horizontal cover that provided good hiding places measured.

“What we found is that the does select areas with more hiding cover as places to give birth,” Beyer said.

Again, a correlation was noted.

Fawns seem to do better in years when there was earlier hiding cover, with winter weather affecting when spring green-up takes place, he said.

The study is not yet finished, but information is being incorporated into the DNR management programs.

Beyer said: “When we documented the decline of deer in the mid-snowfall zone, that information was very useful to our management biologists when they were developing their regulation recommendations following those severe winters.”

In mild to moderately severe winter conditions, the number of fawns that survive their first year and enter the adult age class where they become breeders is the most important factor that’s driving the growth of deer population, he said.

There’s a lot at stake in effectively managing the deer population.

According to the study’s website, deer provide food, sport, income and viewing opportunities to U.P. residents and visitors.

“In some areas, deer overabundance results in damage to farm crops, deer-vehicle accidents and suppression of forest vegetation,” it read. “For these reasons, it is important to monitor the deer population and understand the reasons why it increases or declines.”

The Michigan Predator-Prey Project also is on Facebook and contains plenty of interesting posts.

For example, this was the March 10 post on “Remote Photo Friday”: “We finished our bobcat hair snare survey this week. This survey is great noninvasive technique to estimate bobcat population within the study area. The center of the site is baited with a deer carcass and the edges of the site are brushed in to form a corral. At each opening into the site a modified snare is placed, the locking mechanism has been replaced by a paper clip.”

When a bobcat walks through the opening, a hair sample is deposited on the dremmeled barbs of the modified snare. Readers then were urged to take a look at one of the images of a bobcat entering the site this year.

For more details on the study, visit www.fwrc.msstate.edu/carnivore/predatorprey/index.asp.