A 'check engine' light for health 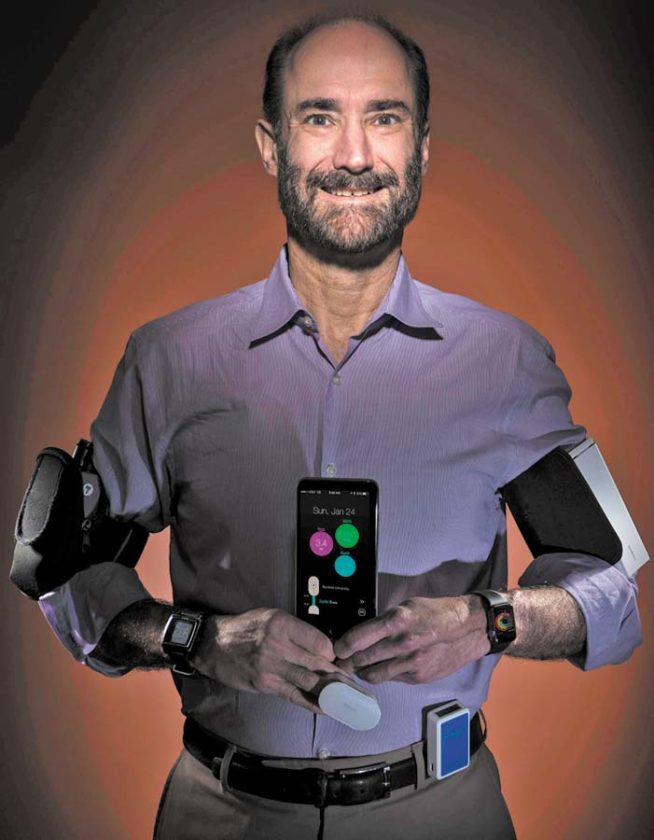 In this photo provided by Steve Fisch, Michael Snyder, professor and chair of genetics at the Stanford University School of Medicine sports wearable gadgets. Wearable gadgets gave Snyder an early warning that he was getting sick before he ever felt any symptoms of Lyme disease. (AP photo)

WASHINGTON (AP) — A next step for smart watches and fitness trackers? Wearable gadgets gave a Stanford University professor an early warning that he was getting sick before he ever felt any symptoms of Lyme disease.

Geneticist Michael Snyder never had Lyme’s characteristic bulls-eye rash. But a smart watch and other sensors charted changes in Snyder’s heart rate and oxygen levels during a family vacation. Eventually a fever struck that led to his diagnosis.

Say “wearables,” and step-counting fitness trackers spring to mind. It’s not clear if they really make a difference in users’ health. Now Snyder’s team at Stanford is starting to find out, tracking the everyday lives of several dozen volunteers wearing devices that monitor more than mere activity.

He envisions one day having wearables that act as a sort of “check engine” light indicating it’s time to see the doctor.

“One way to look at this is, these are the equivalent of oral thermometers but you’re measuring yourself all the time,” said Snyder, senior author of a report released Thursday on the project.

Among the earliest hints: Changes in people’s day-to-day physiology may flag when certain ailments are brewing, from colds to Lyme to Type 2 diabetes, researchers reported in the journal PLOS Biology.

Interest in wearable sensors is growing along with efforts to personalize medicine, as scientists learn how to tailor treatments and preventive care to people’s genes, environment and lifestyle. The sensors are expected to be a part of the National Institutes of Health’s huge “precision medicine” study, planned to begin later this year.

But a first step is learning what’s normal for different people under different conditions.

The Stanford team is collecting reams of data –î as many as 250,000 daily measurements –î from volunteers who wear up to eight activity monitors or other sensors of varying sizes that measure heart rate, blood oxygen, skin temperature, sleep, calories expended, exercise and even exposure to radiation. That’s paired with occasional laboratory tests to measure blood chemistry and some genetic information.

It was that phenomenon that alerted Snyder, the longest-tested participant, “that something wasn’t quite right” on one of his frequent long flights.

Landing in Norway for a family vacation, Snyder noticed his oxygen levels didn’t return to normal like they always had before. Plus his heart rate was much higher than normal, which sometimes signals infection.

Sure enough, soon a low-grade fever left him dragging. He feared Lyme because two weeks before going abroad, Snyder had helped his brother build a fence in a tick-infested rural area in Massachusetts. He persuaded a Norwegian doctor to prescribe the appropriate antibiotic, and post-vacation testing back home confirmed the diagnosis.

Also during the study’s first two years, Snyder and several other volunteers had minor cold-like illnesses that began with higher-than-normal readings for heart rate and skin temperature ‚Äî and correlated with blood tests showing inflammation was on the rise before any sniffling.

In addition, the Stanford team detected variations in heart rate patterns that could tell the difference between study participants with what’s called insulin resistance –î a risk factor for Type 2 diabetes –î and healthy people.

No, don’t try to self-diagnose with your fitness tracker any time soon. The findings in Thursday’s report are intriguing but the study is highly experimental, cautioned medical technology specialist Dr. Atul Butte of the University of California, San Francisco, who wasn’t involved with the research.

“This kind of approach is going to help science more than the general public” until there’s better data about what’s normal or not, Butte said. “Remember, the baseline is always in motion. We’re always getting older. We’re always exposed to things. Just because there’s a deviation doesn’t mean it’s abnormal.”