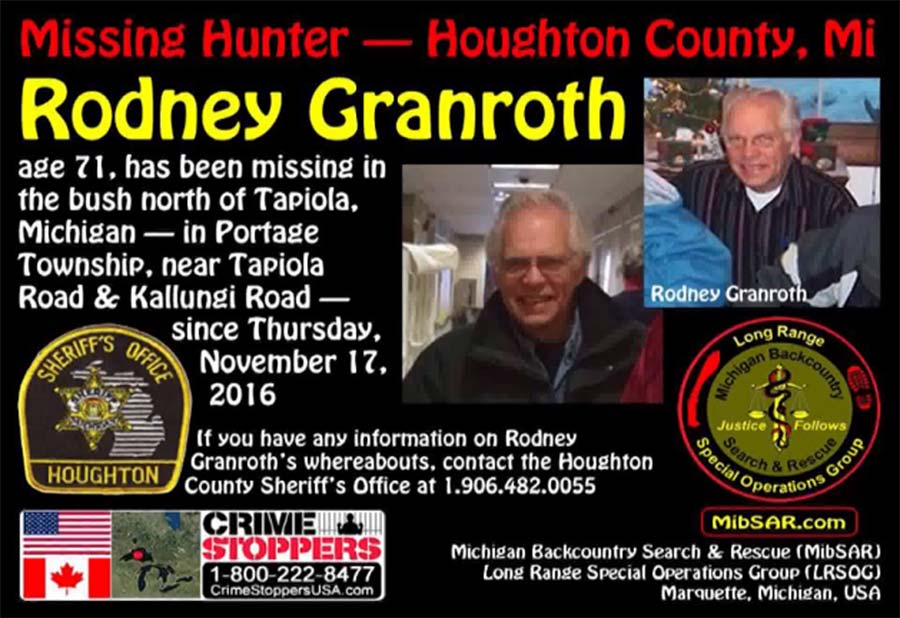 This is the flyer being distributed to aid in the search for missing hunter Rodney Granroth. (Image courtesy of Houghton County Sheriff’s Office)

HOUGHTON —  The Houghton County Sheriff’s Office is looking for help to locate a hunter missing since Thursday.

Rodney Granroth, 71, of Hancock, was staying alone at his Portage Township camp when he presumably left sometime Thursday to hunt for deer. When he didn’t return home Friday, his family reported him missing at 1:30 p.m.

Police found his vehicle and gun case at the camp, but found no sign of Granroth.

Houghton County Sheriff’s Office Det. Sgt. Tom Rosemurgy said Granroth is presumed to be wearing hunter-orange and carrying his rifle, all of which was missing from the camp, located near Tapiola and Kallungi roads in Portage Township.

Rosemurgy said this morning a U.S. Coast Guard helicopter was due to help with the search today.

Superior Search and Rescue and the family looked for Granroth until 7 p.m. Friday, and along with the Sheriff’s Office, continued the search over the weekend with help from Otter Lake Fire Department, Baraga Search and Rescue, Salvation Army and community volunteers. Michigan Department of Natural Resources performed an aerial search Sunday from its plane.

“It doesn’t make it any easier,” said Superior Search and Rescue President Chris VanArsdale, who is also the emergency management coordinator for Houghton and Keweenaw counties.

Anyone with information on Granroth’s whereabouts is asked to call the Sheriff’s Office at 906-482-0055.