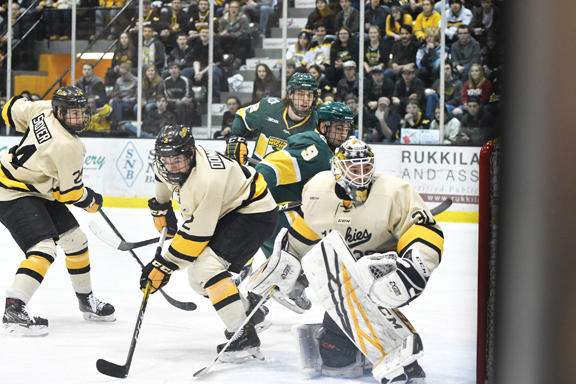 MARQUETTE — Two associations that Northern Michigan University is a member of for its varsity sports teams have called off athletic competition for what is in practical effect the remainder of the school year.

Both took this action because of concerns over COVID-19, or coronavirus, and are acting in conjunction with the NCAA cancellation of its tournaments.

On Thursday, the Western Collegiate Hockey Association called off the remainder of its playoffs starting with Friday’s games.

Then on Friday, the Great Lakes Intercollegiate Athletic Conference, which NMU belongs to for nearly all its other sports, canceled all “athletically related activity for all sports through May 31, 2020.”

The hockey announcement meant that this weekend’s best-of-three semifinal round was called off in addition to next weekend’s single-game championship.

“In light of the current health issue gripping the nation, we are canceling the remainder of the WCHA postseason,” league President and men’s league Commissioner Bill Robertson said. “The health and safety of our student-athletes as well as our coaches, officials, fans, institutional and league staff is our top priority.

“Over the last several days we have discussed options for continuing the competition, but at the end of the day, we felt it was best for all concerned to end the season immediately.”

Instructions were also sent for fans regarding refunds for semifinal series tickets already purchased. For Michigan Tech, fans were simply instructed to “contact your original point of purchase for more information.”

The No. 6 seeded team in the WCHA playoffs, the Huskies were to play at No. 1 Minnesota State in Mankato, Minnesota, on Friday night, tonight, and if necessary, Sunday night.

The other series featured No. 5 Bowling Green State at No. 2 Bemidji State on the same days in Bemidji, Minnesota.

In other series, Minnesota State swept No. 8 Alaska-Anchorage 8-1 and 4-2 in Mankato, Bowling Green swept No. 4 Alaska-Fairbanks 4-2 and 3-2 in Fairbanks, and Bemidji State needed a third game to beat No. 7 Lake Superior State. The Beavers, playing at home, beat LSSU 2-0, then lost 5-3 before winning the rubber game 3-1.

Not making the playoffs were ninth-place Ferris State and 10th-place Alabama-Huntsville.

The league will remain together for one more season before seven of its 10 members — all but the Alaska and Alabama schools — announced last summer they would leave and form a new conference.

The group, which includes the Upper Peninsula’s three universities of NMU, Michigan Tech and Lake Superior State, announced in February it would call itself the Central Collegiate Hockey Association, the league that contained all three of those institutions before its breakup in 2013.

The GLIAC’s announcement will affect the three U.P. universities along with Ferris State, Grand Valley State, Davenport, Northwood, Saginaw Valley State and Wayne State in Michigan; Ashland in Ohio; Purdue Northwest in Indiana; and Wisconsin-Parkside in Wisconsin. Several other schools outside Michigan are affiliate members in a single sport, including women’s lacrosse.

National tournament games remaining in the winter sports of basketball, swimming and diving and indoor track have already been called off per the NCAA, which made that announcement on Thursday.

Friday’s announcement from the GLIAC pertains specifically to any regular-season contests — and actually other related activities such as practices — through the end of May.

“Effective immediately, the GLIAC, in consultation with the Council of Presidents and athletic directors, has canceled all athletically related activity through May 31, 2020,” the statement reads. “During this unprecedented worldwide fight against the COVID-19 threat, the GLIAC supports national and NCAA efforts to protect student-athletes, coaches, fans and communities.”

NMU is a GLIAC member in the spring sports of men’s and women’s golf, women’s lacrosse and women’s track and field, with the last regular-season contest in those sports expected to be May 1.

Other league sports in the spring are baseball, softball and men’s tennis, and the GLIAC website, www.gliac.org, indicates the last of those regular-season games was set for May 23.